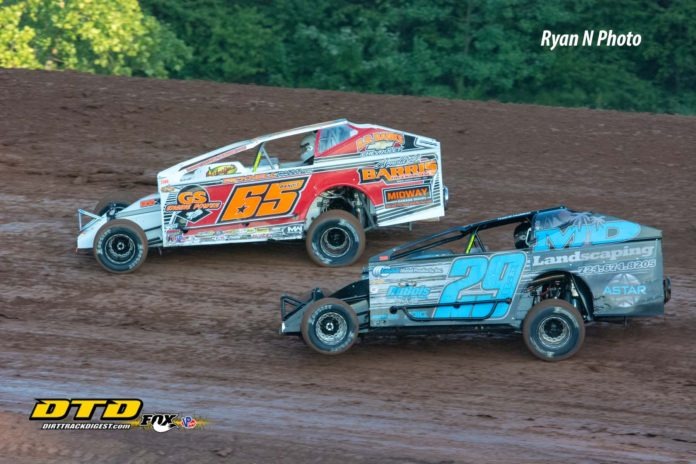 SARVER, PA – Another wild race night, typical of the 2020 season to this point went in the books on Friday night as the story lines thickened in the Fab4 weekly racing divisions. Meanwhile, a convoy was forming behind the scenes as some fantastic looking Trucks from the area were polished to perfection as the annual Big Rig Night saw a very healthy turnout indeed.

On the track, it was business as usual as fans were treated to a little of everything from bizarre and dramatic features, photo finishes, a dominating performance and a family affair at the front of the field.

Jared Miley had yet to taste victory lane at Lernerville in 2020 before the night began in the Precise Racing Products Late Models. And a fast running Russ King, racing in a second car provided by Colton Flinner Racing, almost kept it that way. King bolted out to the early lead and held off stiff challenges from Will Thomas and Miley and a hard charging Mike Pegher Jr. Behind them, Colton Flinner advanced to the fourth spot until he jumped the cushion in turn four and looked to be a strong candidate for the win until misfortune struck. Meanwhile, Pegher Jr. made his way to the second position and overtook King for the lead coming out of turn two with 10 laps to go. However, Pegher’s night went sour just a few seconds later when he and King made contact on a King slidejob bid to retake the lead. During the ensuing yellow flag period, Pegher made contact with King’s car and was disqaualified from the race. The stage was set for a 10 lap showdown with King and Miley and after the green flag waved, Miley wasted no time in taking the lead and kept the field behind him the rest of the way with King and first time Lernerville racer Drake Troutman rounding out the podium.

It took Garrett Krummert just three laps to establish himself as the leader of the race in the Diehl Automotive Big Blcok Modified Main Event. Krummert brought the points lead with him into the night of racing and early on, it looked as if his car was in a completely different zip code in therms of speed. However, when the track changed later on in the 25 lap main event, Rex King Sr. and Rex King Jr knew exactly what to do and where to go as the two drivers made for the top of the speedway and battled lap after lap with Jr. catching Sr. just a little more every lap. Behind them, title contender John Mollick had been moving forward with authority, dispatching of 8 time track champion Brian Swartzlander for the fourth position during the middle section. King SR was able to keep his son behind him. Mollick would make his way up to third but could get no closer to the duo out front as King Sr edged King Jr. at the line for his first Lernerville win of 2020.


Mike Miller started on the front row in the Millerstown Pic-A-Part Pro Stock feature and early on looked to have the 20 lap main event under control having won the top spot in the running order from Corey McPherson in the early going. Miller would slip over the banking, dashing any chance for victory, but behind him, Joey Zambotti and Tyler Dietz would put on a close racing clinic as Zambotti established himself as the new leader until Dietz got his way around him forth lead with six laps to go. However, all was not salted away. Zambotti refused to go away and kept creeping closer and closer to Dietz’s bumper until he drew wheel to wheel with the defending track champion during the final two laps as he edged Dietz at the line for his second win at The Action Track in 2020.

Fab4 Racing Revved up with Marburger Farm Dairy returns to The Action Track next Friday night with gates opening at 5:30 and racing at 7:30