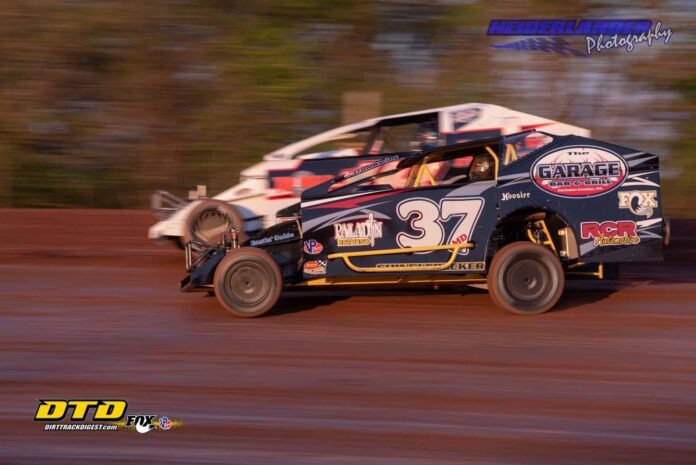 SARVER, PA – A night of fireworks and racing were at the center of Friday night’s program at Lernerville Speedway. And neither aspects disappointed as the sizable crowd on hand came to realize through four feature events that saw four talented drivers finding their way around a challenging surface en route to Terry Bowser Excavating Victory Lane.

Colton Flinner looked to be well on the way to his first career feature victory in the Precise Racing Products Late Model main event, having led the race from the drop of the green flag drop while surviving a number of restarts in early race cautions. However,10th starting Jared Miley used two critical restarts to get close to and then overtake Flinner, the second one came on a lap 16 restart and helped launch Miley over the finish line first as he took his second feature win of the season. In Diehl Automotive Big Block Modified action, Jeremiah Shingledecker in similar fashion, kept the field behind him from the start of the race having started on the front row. Shingledecker then amassed a full straightaway advantage over second running Garrett Krummert. With 20 laps in the books, John Mollick rolled in turn four hard to bring out the red flag, halting all forward progress for the moment. Mollick was able to leave the car under his own power and when action resumed, Krummert was able to inch closer to Shingledecker but not able to pull the trigger on a pass for the lead as Shingledecker collected his second win at The Action Track this year.

The course of the Peoples Natural Gas Sprint feature was altered before it began as top drivers Jack Sodeman Jr. and Michael Bauer each rolled their cars in a turn four tangle in their heat race earlier in the night, taking them out of contention for the remainder of the program. Both drivers were okay. However, the remaining field was thick with possible scenarios in the main event as the front row featured two Apollo, PA based drivers in AJ Flick and Sye Lynch, the two drivers who were nearly tied for the lead in the division standings at the drop of the green flag. Lynch narrowed those potential win scenarios with his right foot from the initial start with a blazing fast car and a driver that knew exactly where to navigate it. Lynch rocketed to substantial sized leads throughout the 25 lap main event and pegged several restarts en route to his second feature win as Flick closed fast in desperation in the waning laps but came up short in his bid to overtake the leader. In Allegheny Sprint Tour 305 Sprint action, Justin Clark put the field behind him with authority while keeping former feature winners Robbie Bartchy and Jacob Gomola at bay, showing speed at every opportunity in taking his first career victory at Lernerville.