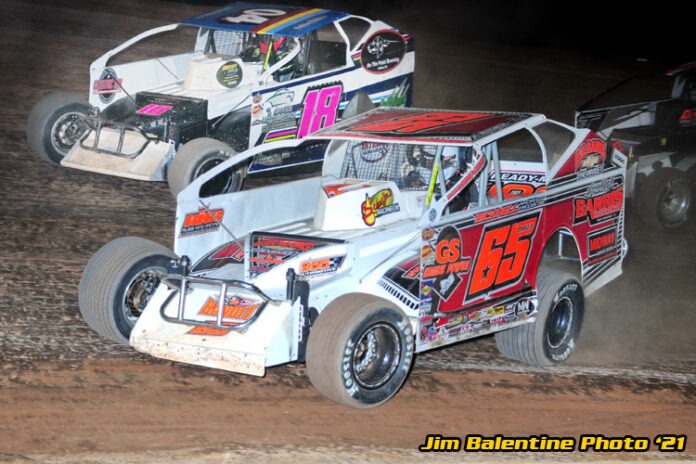 SARVER, PA – Perfect weather graced the Lernerville Speedway as the Fab4 Revved Up with Marburger Farm Dairy weekly show made its highly anticipated return on Friday, July 30. The Art Osmer Memorial for the Precise Racing Products DIRTcar Late Models took center stage on the track as Lernerville Legends and Hall of Famer’s brought fans together for a meet and greet in the main concourse before the Fab4 competitors took to the speedway.

The Precise Late Models took the first green flag of the evening for the 25-lap Art Osmer Memorial with Mike Miller and Alex Ferree pacing the field. Ferree jumped out to an early lead as Logan Zarin, who started in the sixth position, bolted to the second spot by the completion of the first circuit. After a quick lap two caution, Ferree led the field into turns one and two where, in search of the bottom line, Zarin lost the handle of his mount and spun to bring out the race’s second caution. As the action got restarted, Ferree continued to lead over second place running Ken Schaltenbrand as point leader Colton Flinner entered the top-five on lap three. By lap 10, Ferree had caught lapped traffic but the battle behind him had intensified as Flinner, Tommy Beck, and Jared Miley raced side-by-side-by-side for third. Flinner pounded the cushion and found himself in the third spot while Miley made his way past Beck to secure the fourth spot. Miley was setting a torrid pace and by lap 15, made his way around Flinner for the third spot. A lap 17 caution negated a five second lead for Ferree as the field was bunched together for the restart. Schaltenbrand made a move for the lead coming out of turn two, but high side momentum put Ferree back out front. Another caution on lap 22 slowed the pace again but Ferree was not to be denied and went on to claim his 39th career victory at Lernerville and close to $1,500 in additional lap money raised by the Osmer Family. Ferree was followed by Schaltenbrand in second, Flinner in third, Miley was fourth with Tyler Dietz rounding out the top-five.

‘It’s been a while since I’ve been here (victory lane) but to get here in this #1 Cochran car, with all that this car means to Lernerville, it’s really cool to get a win in this car,’ an excited Ferree stated in Terry Bowser Excavating Victory Lane. ‘It’s an honor to win this race in memory of Art Osmer, the Osmer’s are a great family, and you know that by all the great drivers they had driving their car over the years.’ Alex continued, ‘I have to thank my wife and kids for all they put with to let me do this, my dad of course, Lynn (Geisler), Jack (Crowell), Cochran Express, Frankland Rear Ends, Butler RV, Glow Racing, Moody Sales and Service, Jack’s Recycling, Bachman Trucking, Schaeffer’s Oil, and definitely want to thank the crowd!’

Leyton Wagner and Dan Kuriger led the Peoples Natural Gas Sprints to the green flag for their feature with Kuriger claiming the top spot off the start. Fourth starting Jack Sodeman Jr. made his way into the second spot and set his sights on the leader. By lap four, A.J. Flick had found himself in the fifth spot from his ninth starting position while Michael Bauer closed on Sodeman for second. Kuriger started to pull away from the field as Bauer made his way around Sodeman on lap 11 while Brent Matus and Flick battled for fourth. By lap 15, Kuriger had stretched his lead out to four seconds as Matus slipped past Sodeman for third. Flick made his way by Sodeman for fourth while Matus then began to pressure Bauer for the second spot. Bauer was able to hold on for second as Kuriger went on to claim the victory by 3.594 seconds. Matus finished third followed by Flick in fourth Sodeman held on to finish fifth. ‘It’s been a rough year,’ Kuriger said as he sat in Lernerville Victory Lane for the first time since 2017. ‘We got in two wrecks this year and burned our motor up four weeks ago, so we sat out a month. We just got back out tonight so it’s a great night!’

The Diehl Modifieds made their way onto the speedway and Rex King Sr. took the lead coming out of turn two from his third starting spot as pole sitter Colton Walters settled into the second spot. By lap seven, a furious fight for the third position began to ensue as Steve Slater, Dave Murdick, Garrett Krummert, and Rex King Jr. sliced and diced with each other until Murdick found an opening to take over the third spot on lap nine. Ninth starting King Jr. made his way around Murdick on lap 13 to take over the third spot. The only caution of the race fell on lap 15 but ‘The Bandit’ (King Sr.) continued his domination and went on to claim the victory. Following King Sr. was King Jr. in second who took advantage of the lap 15 restart to claim the second spot as Murdick finished third. Jeremiah Shingledecker was fourth followed by Garrett Krummert who rounded out the top five. ‘I didn’t want to see that caution there (on lap 15) but the car was hooked up good, just tried to not disrupt the and keep the traction in it and just go,’ King said while celebrating his second win of the season at ‘The Action Track’.


Chris Schneider topped the Millerstown Pic-A-Part Pro Stock feature followed by Corey McPherson who came from the tail after a lap one mishap that sent hum off the back straightaway. Schneider took the lead from Nick Kocuba after a lap 13 restart and held off a late charge from McPherson to claim his second feature win of the 2021 season. Following McPherson was Brett McDonald in third, Kocuba was fourth and Mike Bordt finished fifth. ‘He (McPherson) was probably a little better than me, I was just hanging on,’ Schneider said in victory lane after his 27th career Lernerville win. ‘I changed the car up a little bit from the last time here and I don’t think that was the right move. It was just a tick off, but we hung on to it.

A Test & Tune is on the slate for Tuesday, August 3. The Test & Tune is open to all divisions and will feature the Mini Stock Grand Slam Series. General Admission is Free to all! On Friday, August 6 the Fab4 Revved Up with Marburger Farm Dairy weekly show which includes a visit from the BRP Modified Touring Series will be in action. It’s also our annual Big Rig night. Marburger Farm Dairy will have a prize package drawing and hand out FREE custom T-shirts to the first CDL Licensed fans to arrive!

Tickets for next Friday’s Fab4 Revved Up with Marburger Farm Dairy weekly show featuring the BRP Modified Touring Series, and all upcoming events can be purchased at www.Lernerville.com, the online home of Lernerville Speedway.