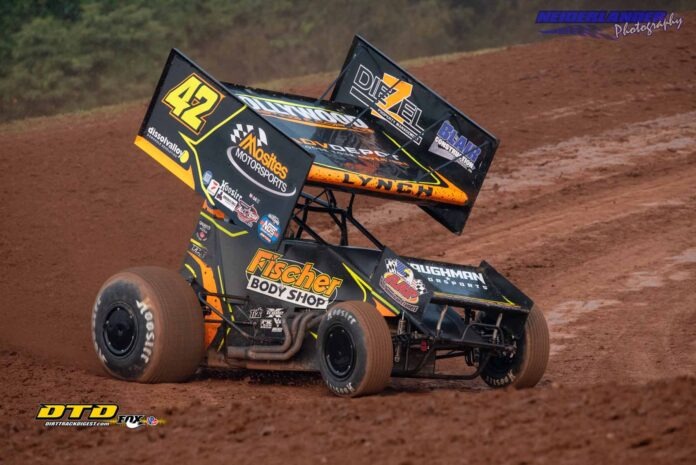 SARVER, PA – Lernerville Speedway welcomed Peluso Roofing as the nights presenting sponsor for the ‘Sprint Spectacular’ that included a fireworks display for the fans, a $4,000 to-win Peoples Natural Gas Sprints main event as well as the RUSH Sprints Weekly Series and the Allegheny Sprint Tour 305 series.

Carl Bowser and Bob Felmlee brought the Peoples Sprints to the green flag for their $4,000 to-win, 30-lap main event with Felmlee jumping out to the early lead. Fourth starting Sye Lynch took advantage of the start and slid into the second position by the end of the first circuit. By lap five, Felmlee had a slim .145 second lead as Lynch began to apply pressure. On lap seven, Lynch mad his move in turns one and two and slid Felmlee coming out of turn two to take the lead. However, the Peoples Sprint point leader, Brandon Matus spun in turn four to bring out the events first caution, negating Lynch’s pass for the lead. Felmlee brough the field back to the green flag with Lynch hot on his trails. It didn’t take long for Lynch to make another bid for the lead as he made his move on Felmlee out of turn two again on lap eight. Lynch took a commanding lead until the field was slowed on lap 15 as A.J. Flick slowed in turn four. When racing resumed, Lynch continued to lead with Carl Bowser now in tow in second. Bowser and third place running Felmlee stayed right with the leader as 12th starting, Tim Shaffer made his way into the top-five. Most of the field, including the leaders were running the high side of the speedway while Shaffer was digging on the bottom.

After climbing into the top-five on lap 17, Shaffer made his way past Felmlee for fourth on lap 20. By lap 22, Shaffer drove under Jack Sodeman Jr., for third and into second on the next circuit to move Bowser back to third. Shaffer then set his sights on Lynch for the race lead and on lap 28, Shaffer shot by Lynch for the lead. Lynch stayed right on the fuel cell of Shaffer as the two went down the backstretch. Lynch made a move to go under Shaffer heading into turns three and four and made contact with the left rear tire of Shaffer sending Shaffer spinning in the middle of the corner to bring out the events final caution. Shaffer got his car heading in the right direction but as the caution car, was sent to the tail. As racing resumed, Lynch was able to pull away from the field and claim the $4,000 victory. Following Lynch across the line was Carl Bowser in second, Jack Sodeman Jr., in third with Bob Felmlee and Brandon Spithaler rounding out the top-five.

‘That’s aggressive racing and I hate to make contact like that,’ Lynch said to many cheers and jeers from the Lernerville crowd. ‘More money on the line, that’s what brought Shaffer to town, and I look up to him as a driver, we raced hard, misjudgment there in (turn) three and I own up to it.’ Lynch continued, ‘All race I drove hard, in a perfect world I would’ve loved to have won the race with no contact. With more money on the line, I did what had to be done. I need to thank all my partners, Mosites Motorsports, ADV Depot, Fischer Body Shop, All American Framers, Blair Construction, Diesel Property Management, everyone who makes this possible, the fans, the crew, and my family.’

John Mollick and Chad Ruhlman brought the RUSH Sprints to the green flag for their 20-lap feature event with Ruhlman taking the lead from his outside front row starting spot. Ruhlman slowly extended his lead lap-by-lap and by lap ten had a 1.5 second lead over Mollick who held solid in the second spot. The battle of the race was for third as Rod George and Gale Ruth Jr., hounded each other until George took the position for good on lap 14. But up front it was Ruhlman who would lead all 20 laps enroute to his 31st career win in the RUSH Sprint division. Mollick held on for second while Rod George held off Gale Ruth Jr., for third as Arnie Kent came home fifth.


‘I love everything about these cars (RUSH Sprints), they’re so much fun, this track tonight was right in my wheelhouse, I love the cushion right on the edge, it slicks up everywhere else. Yeah, I just love this place so thanks for having us,’ Ruhlman stated in Terry Bowser Excavating Victory Lane. ‘Tim Engles, I couldn’t do this without the whole family, Tim and Bob, who work on the cars, they really love this. Grandma Betty, she’s the most excited person here! All the families and everyone that comes with us, it’s a family deal and I’m glad to be a part of it.’

Greg Dobrosky held off a hard charging Steve Kenawell Jr., for all 20 laps of the Allegheny Sprint Tour feature event to claim his second tour win of the season. Kenawall Jr., pressured for the lead early in the event but Dobrosky proved to be too strong in the closing laps as he went on to win by 2.159 seconds. Kenawall Jr, came home second followed by Justin Clark, Jake Gomola, and John Walp in fifth. ‘I could see him (Kenawall Jr.) poking his nose under me every restart so I figured he was pretty good, as long as I could hit my line, I could get away from him.’ Dobrosky said in Victory Lane. ‘I think we could have run wherever we wanted to, I just tried to keep my momentum up around the top, that’s what you need to do when it’s this slick here. I have to thank Peluso Roofing for giving us some extra money to run for tonight, Alternative Power Sources, Altmeyer’s Trailer Sales, and Townsend Gas & Oil.’

Next Friday, September 3 the Fab4 Revved Up with Marburger Farm Dairy will be back in action. The Homak Penn/Ohio Pro Stock Championship Series will be in attendance as a part of the Fab4 event and will be competing for a $3,500 top prize.

Tickets for next Friday’s Fab4 Revved Up with Marburger Farm Dairy weekly show and all upcoming events can be purchased at www.Lernerville.com, the online home of Lernerville Speedway.

Next Friday’s Fab4 Revved Up with Marburger Farm Dairy weekly show will be livestreamed on Lernerville.TV. The Pre-Race Show will go live on LernervilleTV around 6:30 to preview the night’s racing and talk to some of the stars of the nights action! Single race passes are available for $20, but the better deal is the monthly subscription for just $10 more; $30 gets you a full month of Fab4 Racing Revved Up with the Marburger Farm Dairy. LernervilleTV is also the exclusive streaming service of the 15th Annual Steel City Stampede, and all three nights are included in the monthly subscription!