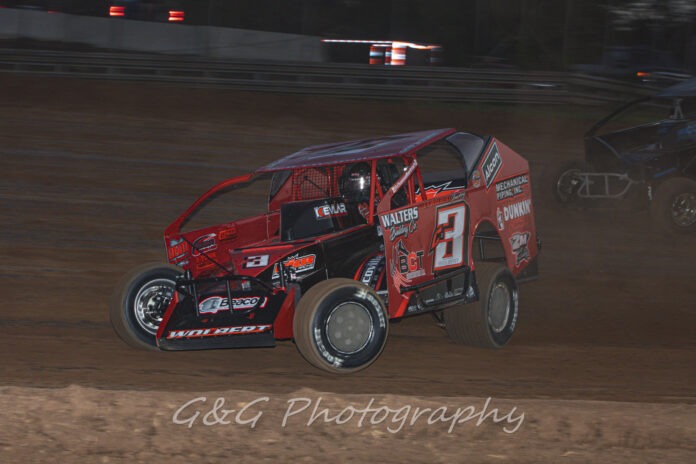 SARVER, PA –  There are many highlights on the Lernerville Speedway schedule each year but none like the traditional ‘Fan Appreciation Night’ presented by #1 Cochran. The excitement that builds from the moment the gates open until the final checkered flag has flown is unparalleled to any other Fab4 Revved Up with Marburger Farm Dairy show. Fans of all ages come in droves to see the action on the track and the sky light up with the annual fireworks display that is custom on ‘Fan Appreciation Night’. The Peoples Natural Gas Sprints, Precise Racing Products Late Models, Diehl Automotive Big Block Modifieds, and the Millerstown Pic-A-Part Pro Stocks were graced with an ultra-fast racing surface all night and the racers took full advantage providing the large crowd with an excellent evening of racing.

As is customary on ‘Fan Appreciation Night’ presented by #1 Cochran, the Precise Late Models were the first feature to hit the track with John Weaver and John Garvin leading the field to the green flag. Garvin jumped out to the early lead from the outside of the front row but as the field came out of turn four on the opening lap, Weaver spun in front of the field to bring out the caution as cars scattered to avoid his spinning machine. Garvin controlled the restart and began to pull away from the field as Logan Zarin and Joe Petyak battled for the second position. As Zarin and Petyak fought for second, tenth starting Colton Flinner began to pressure the two and got two for the price of one in turns one and two to go from fourth to second on lap 4 and set his sights on race leader and teammate, Garvin. Flinner, setting a torrid pace, tracked down the leader and made his move on lap 14 with a slider in turn four to take to top spot. Flinner quickly pulled away from the field until disaster struck on lap 18 when the right rear wheel came off his Longhorn Chassis in turn two to bring out the caution. With Flinner’s misfortune, Garvin inherited the lead and paced the field as the green flag fell to resume racing. Garvin pulled away again as 16th starting Alex Ferree, in his Lynn Geisler owned, #1 Cochran sponsored Rocket Chassis, made his way around Zarin and Petyak for the second spot but had nothing for Garvin as he crossed the line 3.4 seconds ahead to capture his first Precise Late Model win at ‘The Action Track’ since 2013. Ferree, who was the night’s Penske Truck Leasing Hard Charger by gaining 14 positions, was second followed by Petyak in third, Michael Lake made a late race pass for fourth while Logan Zarin held on for fifth to collect an additional $75 courtesy of Peluso Roofing.

‘It feels good’, Garvin said in Terry Bowser Excavating Victory Lane, ‘it’s been a long time! I think the last time we won it was #1 Cochran (Fan Appreciation) Night so if we could have Cochran Night again next week, that’d be great. We went to the sprint car stuff for a while, that was fun, it was just too hard for me to transition over to how sprint cars work, it just wasn’t me so, here we are.’ Garvin continued, ‘Mark (Flinner) did a great job with the car, I’m not a top (high side) guy, so you know how good the car is because I was up there.’

The Diehl Modifieds were next up, and Chas Wolbert set the pace early from his pole starting position. Outside pole sitter Rick Regalski held the second position over Dave Murdick while Brian Swartzlander and Garrett Krummert battled for the fourth spot. Krummert made his way by Swartzlander on lap seven as Murdick pressured Regalski for the runner-up spot. Murdick got by Regalski in turn three on lap 10 and in an effort to retain the position, Regalski lost the handle and spun in turn four collecting both Krummert and Swartzlander to bring out the caution. When racing resumed, Wolbert continued to lead with Murdick in tow. Brad Rapp was the beneficiary of the as he inherited the third spot but Krummert, who pitted during the caution had already made his way to Rapp’s back bumper by lap 14 and one lap later made the pass for the third spot. Krummert was slowly reeling in the second-place car of Murdick until he slipped off the banking in turn two and surrendered the third spot to last week’s winner Jeremiah Shingledecker. Wolbert had a solid lead as the laps wound down but with just two laps remaining, caught lapped traffic to allow Murdick to close the gap. But Wolbert was not going to be denied as he patiently maneuvered through the traffic and hold on by a .610 gap to claim his first ever Diehl Modifieds checkered flag at Lernerville Speedway! Murdick came home second with Shingledecker third followed by Krummert in fourth and Rapp in fifth to collect an additional $75 thanks to Peluso Roofing.

‘Ever since I was a kid, I’ve looked up to all of these guys and to be here competing with them, behind them usually, and to be here in front of them tonight, man, it’s just awesome,’ a very excited Wolbert exclaimed in Bowser Excavating Victory Lane. ‘I tried not to let anything go through my mind’, after the last caution, ‘because I’m my own problem, so I just tried running my race, hitting my marks and man, this car was great tonight.’

After the glorious fireworks display provided by #1 Cochran, the Peoples Sprints took to the speedway for their main event, and it was Darin Gallagher who led the way early from his fourth starting spot with Danny Kuriger in second. Ninth starting A.J. Flick quickly worked his way into the top-five on lap two and on lap four was in fourth as the top three of Gallagher, Kuriger, and Dan Shetler had pulled away from the field. Flick wasted no time as by lap 10 he had caught Shetler and on lap 13 made his move into the third spot. As Flick and Shetler swapped positions, Sye Lynch, who started eighth, had caught the two and got by Shetler the following lap. With Gallagher still leading, Flick and Lynch were making wholesale gains on the leaders and on lap 18 Flick found himself in the second spot and set his sights on the leader. Lynch also got by Kuriger to move into third on lap 20 as Flick stalked the leader. As flagman Dan Hunkele gave the two-to-go signal, Flick turned up the wick and, in typical A.J. Flick style, got a great run on the bottom off turn two and pulled along side of Gallagher down the backstretch to take the lead in turn three enroute to his fourth Lernerville Speedway win of the season. Lynch was able to make a last lap pass for the second spot as Gallagher held on for third. Dan Shetler crossed the line in fourth with Corbin Gurley getting an extra $75 for his fifth-place finish courtesy of Peluso Roofing.

‘Ninth to first, that’s another good run for us,’ Flick said while celebrating his fourth win in eight days as he swept last week’s Western PA Sprint Speedweek with wins at Lernerville, Sharon Speedway wand Tri-City Speedway. ‘I knew we were picking off cars one-by-one, a lot of people had really good runs tonight, Dan (Shetler) was getting around the bottom good, which is was by bread and butter so I had to figure out a way to get around him on the top and then see if we could set sail after that but man, this race flew by, I had no idea how many laps were left. This is Sye’s (Lynch) kind of track, that kid rips around places like this, especially when there is something to lean on. I figured he (Lynch) was coming because I was playing around so much on the bottom that I was afraid he was going to make a run and get around us on the outside. Fortunately for me, there was always someone in the middle or the top so I figured if I could just not lose ground on the bottom, it wouldn’t let Sye get a run on us on the top.’

The last feature of the evening featured the Millerstown Pro Stocks that had Brandon Connor and Cody Koteles on the front row. Connor and Koteles put on a show in the front of the field as the two raced side-by-side for a majority of the race without ever touching each other. The two swapped the lead numerous times throughout the 20-lap main event but by lap 15 Connor took command for good for his first Lernerville win of his career. Chris Schneider came from his tenth starting position to finish second after getting by Koteles on lap 17. Koteles finished third ahead of Todd Weldon and point leader Tyler Dietz who also earned an extra $75 courtesy of Peluso Roofing.

‘We’ve never finished a race here,’ Connor said in his first ever visit to Terry Bowser Excavating Victory Lane. ‘I’ve wanted to win when we’ve come down here the first two or three times, tonight makes it even better. We were just coming tonight to feel the car out and we felt it out pretty well.’

Up next, on Friday, June 17, at ‘The Action Track’ will be the Mid-Season Championships/Chad McCutcheon Memorial for the Fab4 Revved Up with Marburger Farm Dairy divisions of the Peoples Sprints, Precise Late Models, Diehl Modifieds, and the Millerstown Pro Stocks.

Next Friday’s action and all Fab4 Revved Up with Marburger Farm Dairy shows will be livestreamed on Lernerville.TV. The Pre-Race Show will go live on LernervilleTV around 6:30 to preview the night’s racing and talk to some of the stars of the nights action! Single race passes are available for $20, but the better deal is the monthly subscription for just $10 more; $30 gets you a full month of Fab4 Racing Revved Up with the Marburger Farm Dairy.