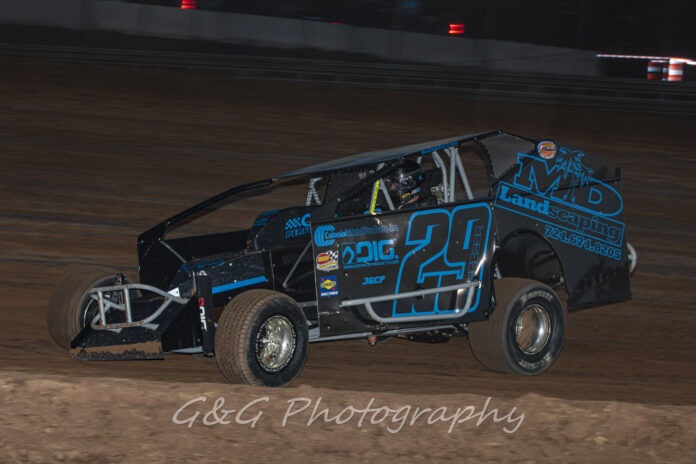 SARVER, PA – With chamber of commerce weather surrounding Don Martin’s Lernerville Speedway on Friday night, the Fab4 divisions returned to action, and the sizable crowd on hand were treated to four action packed feature events on a fast and smooth racing surface with a plump cushion. The inaugural Ken Schaltenbrand Sr. Memorial featuring the ULMS Late Models took center stage and did not disappoint as 32 drivers assembled to do battle for the $4,000 top prize and a seemingly endless amount of contingency awards and lap money in honor of the late driver who graced The Action Track years ago. While there were only show up points available for the Precise Racing Products Late Model drivers on Friday night, drivers in the other three regular divisions were laser focused on positioning themselves better in the season points standings which come to a close next Friday night.

Georgia’s Ashton Winger came north for the first of a trio of races on the weekend, coming in fresh off a weekend that saw him capture a $10,000 check at Talledega Short Track last Saturday night, and was looking to keep that momentum rolling as he started the 30-lap Ken Schaltenbrand Sr. Memorial race. However, Sarver’s Michael Norris had other ideas at the outset of the night and brought the field to the green flag as the pole sitter flanked by Chub Frank to his outside. After a caution on the initial start for Dan Angelicchio, Norris quickly set out to put the field as far behind him as possible while behind him, Frank, Winger, Dave Hess and Alex Ferree made up a formidable chase pack. Following a lap three restart, Ferree quickly moved to the third spot behind Norris and Winger with Norris setting a blistering pace while using the top side of the speedway. With 23 laps remaining, the yellow flag waved for Daryl Charlier and on the ensuing restart, Winger tested Norris with a slide job attempt that came up just short. The lead for Norris was short lived though as Winger found his way around him for good with a pass on the backstretch on lap 19 after the two drivers had thrilled fans with a series of traded slide jobs that saw the lead exchanged on the same lap between the two.

Behind the battle up front, veteran pilot Matt Lux had been making steady progress towards the front from his ninth starting spot to fifth while Ferree took advantage of Norris bobbling on the cushion to take the second spot while Frank moved into third. Gary Lyle spun on lap 14 to bring out the yellow flag, giving Ferree and Frank and Norris a chance to reclaim the top spot. The restart saw Lux get a great jump to move into the third spot while Ferree fell back to fifth. Norris gave it one final attempt to retake the lead just moments later but was unable to find enough momentum to make the slide jobs stick before going off the top of turns one and two with four laps to go. Ferree made it back towards the front on the restart, nearly taking second away from Lux before the checkered flag fell, but out front it was all Winger who posted his second straight victory in less than a week for the Big Frog Motorsports team.

“I’ve watched races here my entire life, there’s a lot of awesome people that have won here,” Winger said in Terry Bowser `Excavating Victory Lane. “Our car was really good. I think Mike was a little better than me early, he could round that cushion really well. I knew I was going to have to wait and be patient and then that top thinned out a little bit and I then I kind of found a line in three where I could hold the race track and keep to him and I knew if I could get out front I could hold the lead and block and protect.”

2020 Diehl Automotive Big Block Modified champion Garrett Krummert had found victory lane twice at Lernerville in 2022, with both wins coming from the RUSH Sportsman Modified. However, he had yet to taste a feature win with his regular Friday night division despite being one of the fastest cars on the track week in and week out. On Friday night, Krummert left no doubt as to who had the fastest hot rod in the Diehl Automotive Big Block Modified main event.

Eight time track champion Brian Swartzlander wasted no time in taking the early lead while behind him, polesitter Dave Murdick and the fourth starting Krummert took up positions two and three in the early going. Making his way forward from his ninth starting spot was Rex King Jr. who would make his way around points leader Jeremiah Shingledecker, Rick Regalski and Chas Wolbert to join the front pack after the halfway mark of the 25-lap main event. Meanwhile, Krummert managed to find his way around Murdick and set his sights on Swartzlander, chipping away at the lead with each lap until lap 12 when he used the top side of the surface to pull around the race leader down the back stretch. Swartzlander did not go away quietly, making several attempts to retake the lead, but couldn’t find enough momentum on the bottom to make his way back around. He did get new life with eight laps to go as Colton Walters brought out the yellow flag, however Krummert was simply too strong, and kept the lead. King Jr. was able to work all the way up to the second spot, passing Murdick who had worked his way around Swartzlander in the late going, nearly challenging Krummert for the win in the final set of turns.

“We were just trying to win a race,” Krummert said. “We weren’t even thinking about the points. We’ve been off a little bit here the last few weeks but I think we’ve got rolling here a little bit.

Nearly two years ago to the day, Dan Shetler found himself in victory lane after the Peoples Natural Gas Sprint Car main event, and the time in between those two years has been challenging for the veteran pilot from Johnstown, PA with a good many ups and downs. He had been coming ever so close to striking paydirt in the prior weeks, but on Friday night, following an amazing battle with Brandon Matus, he came out on top in satisfying fashion to the delight of the crowd on hand.

Matus and Shetler led the field to the initial green flag, Matus bolted as if he’d been shot out of a cannon into the lead while behind him with Shetler and Jack Sodeman Jr. in positions two and three respectively. The action slowed with three laps in the books as Bill Kiley slowed to a stop and when action resumed, Shetler twice tried to wrest the lead away from Matus and his second attempt made it happen. Another caution with five laps down set the stage for Shetler and Matus to resume their battle as Matus took the lead back with 16 laps left. Behind them, Jeremy Weaver ,Darin Gallagher, and Brandon Spithaler made up the chase pack. At the halfway point, Matus began stretching his lead while Gallagher had just about made it to Shetler’s tail tank while Spithaler began sizing up Gallagher for a pass.

All action stopped with 11 laps remaining when Sodeman went end over end beyond turns one and two, bringing out the red flag. Sodeman was able to walk to the ambulance under his own power and on the ensuing restart, Shetler made his way back around Matus using the top side of the speedway while Spithaler was able to put Gallagher in his rear view, taking the third spot. Out front, Shetler began putting distance between himself and Matus, a trend which continued until he crossed first under the checkered flag by 1.22 seconds.

“It’s been too long, but we’ll take it,” Shetler remarked. “It was a fun race. Always a lot of trust with Brandon, he pretty much showed me I was driving a little too cautious when he blew my doors off and I wasn’t letting that happen twice. I had a bad year last year, all we did was tear up cars and Allen Pryde trusted me, putting me back in his car and we’ve been having fun and learning a lot. This car’s been getting faster every week and I can’t thank him enough for believing in me even when I didn’t believe in myself.”

Jake Dietz and Jason Fosnaught brought the Millerstown Pic-A-Part Pro Stock main event to the green flag as Fosnaught took the early lead. Just one lap in, Dietz uncharacteristically spun in front of the field in turn four, with Dale Tuche and Mike Bordt making contact. Just missing the jingle was six-time track champion Corey McPherson who was making just his second start of 2022. The caution moved McPherson up to the second spot and when action resumed, McPherson rocketed around both Fosnaught and Joey Zambotti at once on the backstretch to take the lead. McPherson started getting some gap on the field once in the lead as the pack behind him consisting of points leader Tyler Dietz, Zambotti, Fosnaught and Chris Schneider began mixing it up furiously for positions two through five with four laps in the books. Using the bottom of the speedway, Dietz firmed up his grip on the second position until lap seven when Schneider went past everyone, including race leader McPherson, to the front of the pack. McPherson headed for the pits after suffering some engine trouble. Once out front, Schneider cruised to his fourth victory of the season with Dietz and Zambotti rounding out the podium.

“There’s a middle groove that’s out there that I’ve never found before,” Schneider said. “The right rear stuck right in that little groove and she just worked perfectly. ”

Racing returns next Friday (August 26) as we present our annual Championship Night as well as our Autism Awareness Night. Stay tuned to our social media channels on facebook and twitter for the latest updates and event night details as well as our official website at Lernerville.com.