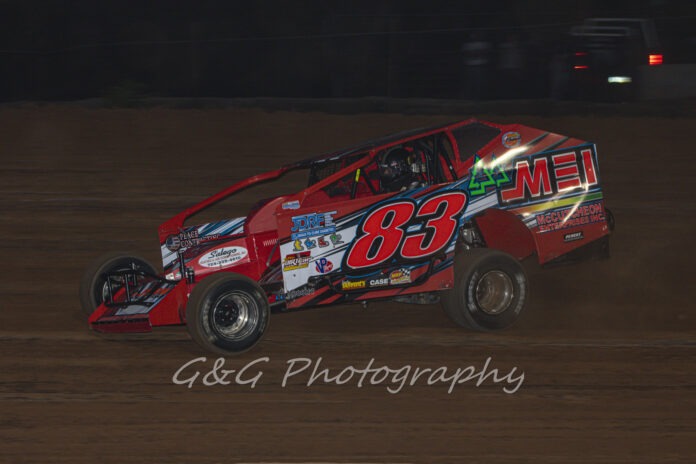 SARVER, PA-It was a night full of milestones and champions as Lernerville Speedway closed out their 2022 Fab4 Revved Up with Marburger Farm Dairy season on Friday, September 2.  Brian Swartzlander made history in becoming the fifth driver to ever win 100 feature events joining an illustrious list including Bob Wearing Sr., Lou Blaney, Ed Lynch Jr., and Lynn Geisler. Tyler Dietz picked up his first career Precise Racing Products Late Model win and followed that up with a win and a championship with the Millerstown Pic-A-Part Pro Stocks while Chad Ruhlman captured the Hovis Auto & Truck Supply RUSH Sprints win.

Jeremiah Shingledecker used a third-place finish in the Diehl Automotive feature event to win back-to-back championships and fourth overall after both Garrett Krummert and Dave Murdick dropped out of the race on lap 8. Krummert came into Championship Night only 15 points behind Shingledecker while Murdick was 37 points out. With Murdick dropping out while leading, Colton Walters inherited the lead but had Brian Swartzlander right on his rear bumper. Walters did all he could to hold the lead but with 11 laps to go, Swartzlander made his way to the lead using the high side of the speedway. Swartzlander would go on to lead the final 11 circuits to claim his monumental 100th victory at ‘The Action Track’. Walters held on for second while Shingledecker finished third ahead of Chas Wolbert in fourth and Rick Regalski in fifth.

‘It really is a great feat for us (100th win), these guys (crew) work so hard and I didn’t know if we were going to get it. To get it on Championship Night, the last night of the season, never know, this might be it, you never know,’ Swartzlander said while celebrating his win. ‘We’ve had a good year, a lot of top-fives all year, also had a lot of disappointing nights, it’s been a roller coaster (of a season). Tonight, the car couldn’t have been better, we were in the pits trying to decide what we want to do, and the guys said, piss on it, let’s run it the way it is and that’s what we did. We didn’t touch the thing and the car was awesome.’

We’ve gotten a lot better on a slicker racetrack,’ 2022 Diehl Automotive Big Block Modified Champion Jeremiah Shingledecker said in Victory Lane during his champion’s interview. ‘We’ve won a couple on night’s when it was slick and on night’s like tonight when there’s a little bit more ‘bite’ to it, we’ve struggled a little bit, the car has so much grip in it that I struggle to get it through the corners without losing it through the straightaways so it’s been a challenge for us on the heavier tracks but this 2021 Bicknell (Chassis) has been really good to us.’ Shingledecker continued after being asked about his future, ‘It’s just like anything, the longer you’re at it, the better you get and the more you learn and here we are, 27 years later knowing more, if we would have known all this stuff back then, we would have been more successful back then. But no, we’re not going anywhere, we’re going to downsize a little bit, maybe not quite as many races but we’re still going to be a weekly car here at Lernerville.

Tyler Dietz took the lead for good from Logan Zarin after a lap 9 caution of the 25-lap Precise Late Models feature enroute to his first career Late Model win. Dietz has been knocking on the door of that elusive first win for many weeks leading up to Championship Night and on this night, he was not to be denied. After his win in the Late Model, Dietz told the night’s announcer, Tyler Harris, that he would see him again in Terry Bowser Victory Lane after the Millerstown Pic-A-Part Pro Stock feature, and he did just that as he solidified his third Pro Stock championship after taking the lead on lap 4 of the Millerstown Pro Stock feature to win his fifth Pro Stock win of the 2022 Lernerville Season.

‘That’s the hardest win I’ve ever worked for,’ an elated Dietz said in Victory Lane after his first career Late Model win. ‘I’ve been close many times; those guys (competitors) made me earn it. I said tonight when I got in the car, I’m running the heck out of it and I’m going for it.’ After his second win of the night, Dietz returned to Terry Bowser Excavating Victory Lane and jokingly said, ‘I don’t know what I’m going to do now, I may as well quit.’ All joking aside, Dietz got emotional after claiming his third Millerstown Pro Stock Championship, ‘This Double-Zero (car number), it’s my Grandpap, before he dies last year he said, I want to be on the racecar so I wanted to put his sticker on there and this is for him and my Grandma, she’s really sick and can’t come to the races anymore and she’s at home watching. I was so emotional after that Late Model win and I thought all I want to do is win both in the same night so, it’s awesome, I’m happy for my team, I’m happy for everyone who helps me, I’m going to say the same thing I said before…wow!’

‘No not at all,’ 2022 Precise Racing Products Late Model Champion John Garvin, Jr., said in Victory Lane after being asked if he saw himself winning the track championship in his first year back in a Late Model since 2014. ‘Mark (Flinner) called a couple times before the season started and we made the deal (to drive a second John Johnson owned car) two weeks before Lernerville was supposed to open but we rained-out a couple of times, so we went to Port Royal. But no, I was kind of hoping for a couple top-ten’s, a few top-five’s maybe a third or something but, not what we did. I honestly didn’t know if I was going to be able to do it,’ Garvin said about his transition back into a Late Model after a few years driving a 410 Sprint Car. ‘The cars are so different than what I ran in the past, then coming back from the Sprint Cars, I wasn’t real good the first two or three night’s out there (Port Royal), but then we came here first night and I felt pretty comfortable and felt comfortable all year except for maybe two or three nights. I just need to thank everyone, it takes everyone for me to be able to do this.’

Chad Ruhlman led all 20 laps of the Hovis Auto & Truck Supply RUSH Sprint feature event on his way to his second RUSH Sprint win of the 2022 season at Lernerville Speedway. Arnie Kent came home second ahead of youngster Blaze Myers in third while Gale Ruth Jr., finished fourth and Andy Priest in fifth.

‘Man, this place is fun,’ Ruhlman said as he climbed out of his car in Terry Bowser Excavating Victory Lane. ‘You could run all over the place, you could run five-wide in some places it seemed like. We were good on the top and the middle, but everyone in this class is very respectful, the lapped cars were having fun. It doesn’t matter where you start here, you can find your way to the front if your car is good enough luckily my team gives me good stuff each week.’

Next Saturday, September 10 at ‘The Action Track’ will be the Back-to-School Bus Races including an Enduro, kids bike races and more before the $10,000 to-win ‘Commonwealth Clash’ featuring the FAST 410 Sprint Cars and the Hovis Auto & Truck Supply RUSH Sportsman Modifieds on Saturday, September 17.

Next Saturday’s action as well as the ‘Commonwealth Clash’ and all Fab4 Revved Up with Marburger Farm Dairy shows will be livestreamed on Lernerville.TV. The Pre-Race Show will go live on LernervilleTV around 6:30 to preview the night’s racing and talk to some of the stars of the nights action! Single race passes are available for $20, but the better deal is the monthly subscription for just $10 more; $30 gets you a full month of Fab4 Racing Revved Up with the Marburger Farm Dairy. 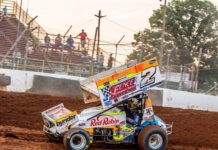