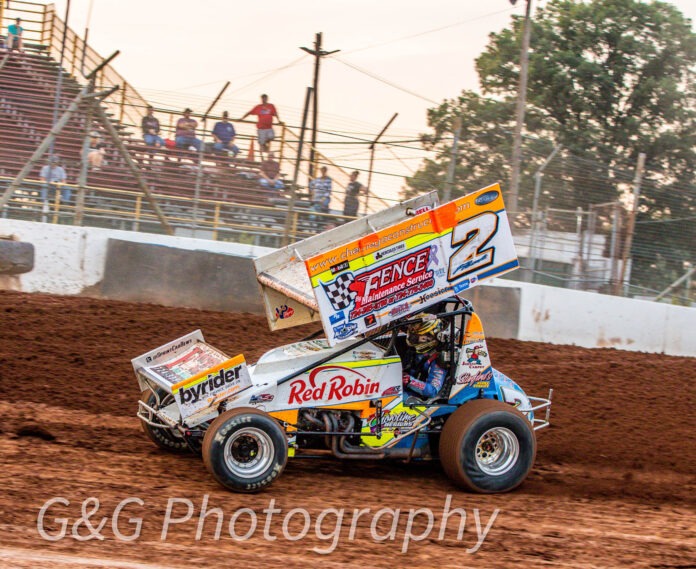 SARVER, PA- For the last three seasons at Lernerville Speedway A.J. Flick has used consistency to win back-to-back-to-back Peoples Natural Gas Sprint championships. However, the difference between the last two (2021 & 2022) seasons couldn’t have been more different. Flick claimed the 2021 championship without winning a race at ‘The Action Track’, but in 2022, Flick bagged seven wins enroute to his sixth track championship, all within the past eight seasons.

Flick wasted no time to get his first win of the 2022 season as he captured the checkered flag on Opening Night back on April 22. A.J. followed that up with an 11th place finish with the Tezos All Star Circuit of Champions Sprints on April 29 that was won by Hunter Schuerenberg. Sye Lynch picked up his first and only win of the 2022 season on May 13 before Flick snagged his second win on May 20.

As the month of June rolled in, Flick continued clicking off wins as he began the month with a $3,000 win with the Western PA Sprint Speedweek for his third win of the year then went on to sweep the last two Fab4 Revved Up with Marburger Farm Dairy events of the month to give him five wins and a commanding 30-point lead heading into the summer break for the Peoples Sprints.

After a couple of weeks off, the Tezos All Star Sprints returned to Lernerville Speedway on July 6 for the $25,000 to-Win ‘Don Martin Memorial’ Silver Cup XXXI in which multi-purpose racing superstar and 2021 NASCAR Cup Series Champion, Kyle Larson cashed the monster check. Fab4 action picked up again on July 15 with Danny Kuriger picking up the win before Flick knocked out his sixth win on July 29.

Mother Nature plagued the month of August but not before Flick nabbed his seventh win on the season on August 12 while Dan Shetler picked up the win on the final night of action for the Peoples Sprints. Championship Night, which was originally scheduled for August 29, was postponed one week because of rain but with the All Star Sprints in competition less than two hours away and the 2022 Track Championship already wrapped up by Flick, the Peoples sprints were given the night off to compete with the All Stars. The Peoples Sprints closed out the regular season on September 17 when the Ti22 Performance FAST Sprints invaded the Sarver, PA oval for the $10,000 to-win ‘Commonwealth Clash’. Aaron Reutzel blistered the field for the win with Sye Lynch being the highest finishing Lernerville regular with a fourth-place finish.

Following Flick in the 2022 Point Standings was Darin Gallagher in second, 44-points behind Flick. Gallagher also claimed the 1-800-GetPhil Heat Race Bonus for the Peoples Sprints. Brandon Matus was third on the year just ahead of Jack Sodeman, Jr., and Cody Bova in fifth. Carl Bowser was sixth with Dan Shetler seventh, George Hobaugh, Jr., eighth, Danny Kuriger in ninth and Brent Matus rounding out the top-ten.

If you can’t join us in person at the track for the 14th Annual ‘Steel City Stampede LIVE on LernervilleTV’ you can still be a part of the action from the comfort of your own home and catch every single lap of action exclusively and only on LernervilleTV. Thursday night’s practice night can be purchased for $10.00; Friday night’s preliminary action is $20.00 while Saturday’s Stampede finale is $30.00. However, the best deal is for the complete three-day package that is listed as $45.00. And of course, if you have already purchased the monthly package, the 14th Annual ‘Steel City Stampede LIVE on LernervilleTV’ is included in your monthly subscription.