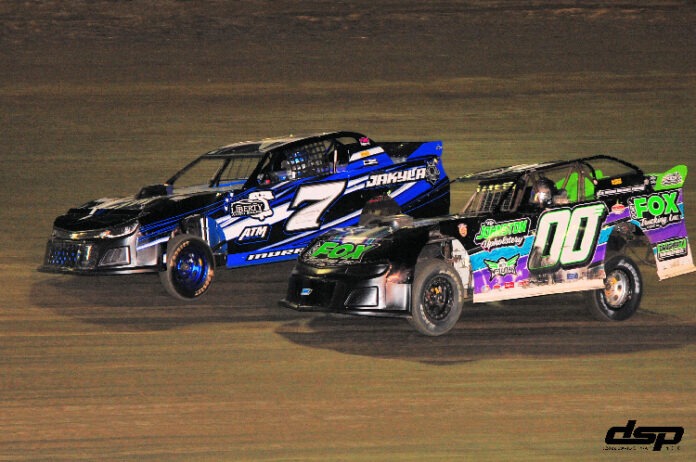 SARVER, PA- It was a special year for the 2022 Millerstown Pic-A-Part Pro Stocks Champion Tyler Dietz. Dietz captured a division leading five Fab4 Revved Up with Marburger Farm Dairy wins including one on the final night of Fab4 competition to claim his third championship in four years at Lernerville Speedway. Dietz followed up his stellar year in which he finished in the top-five in ten of eleven Fab4 races with a huge $10,000 win in the 100-lap, ‘Street Stock Nationals’ held at Bridgeport Motorsports Park in Swedesboro, NJ this past Friday, October 7.

Dietz kicked off the 2022 Fab4 season with a win on Opening Night and followed that up with another win on April 29 as the Millerstown Pro Stocks were on the card with the Tezos All Star Circuit of Champions Sprint Cars. Curtis Bish found Terry Bowser Excavating Victory Lane on May 13, one week before Dietz took his third checkered flag on May 20.

On June 3 it was Chris Schneider, who has surprisingly never won a championship at ‘The Action Track, claiming his first win of the season, cementing himself as a serious title contender. The following week saw Brandon Connor capturing his first ever Lernerville win on June 10 before Schneider picked up his second Fab4 win on June 17 before the Pro Stocks had a few weeks off for the summer break for the 16th Annual ‘Firecracker 100’ and the ‘Don Martin Memorial Silver Cup XXXI’.

After going about a month and a half without finding victory lane, Dietz got back to his winning ways on July 8 with his fourth win of the season but Schneider, hot on his heels in the championship race, won the next two nights out for the Millerstown Pro Stocks to bring his win total up to four as well.

With both Dietz and Schneider having four wins on the year, Dietz had a slim 11-point advantage over Schneider going into Championship Night on September 2. With both drivers in the same heat race and Schneider winning with Dietz finishing second, Dietz went into the final feature event of the 2022 Fab4 season with just a 10-point lead. Adding to the pressure for Dietz was the excitement from the Precise Racing Products Late Models feature held just before the Pro Stocks hit the track for their feature. Dietz had to regain his composure after he bagged his first ever Precise Late Model feature win and jump in his Pro Stock in an attempt to claim his third track title. Dietz did just that and went on to win his fifth Millerstown Pro Stock feature event and the 2022 Pro Stock Championship.

Dietz got emotional after claiming his third Millerstown Pro Stock Championship, ‘This Double-Zero (car number), it’s my Grandpap, before he died last year he said, I want to be on the racecar so I wanted to put his sticker on there and this is for him and my Grandma, she’s really sick and can’t come to the races anymore and she’s at home watching. I was so emotional after that Late Model win and I thought all I want to do is win both in the same night so, it’s awesome, I’m happy for my team, I’m happy for everyone who helps me, I’m going to say the same thing I said before…wow!’

On top of claiming the 2022 Championship, Dietz also claimed the 1-800-GetPhil Heat Race Bonus. It was previously announced that Schneider was the Heat Race Bonus champion, but upon further review, Dietz led the way in heat race points to earn the $800 bonus courtesy of 1-800-GetPhil. Following Dietz in the Championship standings was Schneider who, after his early exit during the feature on Championship Night, finished 30 points behind Dietz. Todd Weldon was third just seven points ahead of Joey Zambotti and 17 points ahead of Brett McDonald who was fifth. Cody Koteles was sixth with Mike Bordt in seventh, Jacob Dietz in eighth, Brian Daugherty was ninth with Jacob Weyer rounding out the top-ten.

If you can’t join us in person at the track for the 14th Annual ‘Steel City Stampede LIVE on LernervilleTV’ you can still be a part of the action from the comfort of your own home and catch every single lap of action exclusively and only on LernervilleTV. Thursday night’s practice night can be purchased for $10.00; Friday night’s preliminary action is $20.00 while Saturday’s Stampede finale is $30.00. However, the best deal is for the complete three-day package that is listed as $45.00. And of course, if you have already purchased the monthly package, the 14th Annual ‘Steel City Stampede LIVE on LernervilleTV’ is included in your monthly subscription. 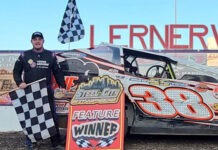 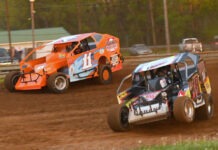