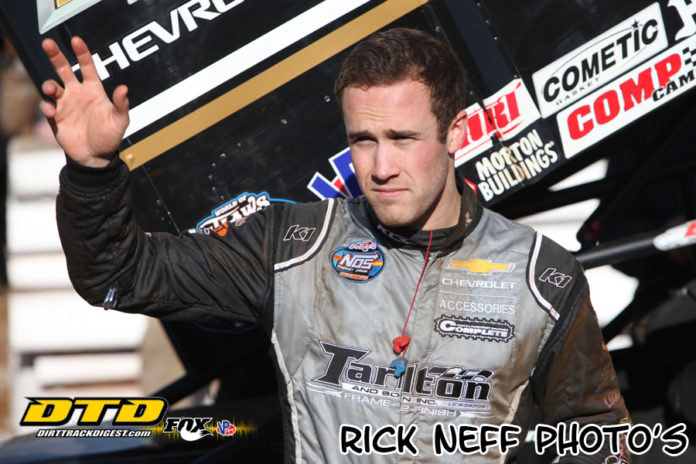 ABBOTTSTOWN, PA –  World of Outlaws regular, Carson Macedo, invaded the pigeon hills on Saturday night and led all 35-laps of the Outlaw tune-up to pocket $10,000. The World of Outlaws will be in action at Lincoln for the Gettysburg Clash this coming Thursday, July 23 and Macedo is poised to be a threat to score a win for the Outlaws as they take on the PA Posse.

Macedo inherited the pole for the start of the event after scheduled pole-sitter, Brandon Rahmer, scratched for the night after experiencing engine issues after winning the dash.

Macedo led the field into turn 1 running the bottom with Rahmer trying out the top side of the track. Schuchart moved up to third with Ryan Smith driving to fourth and Pittman settling into fifth.

Schuchart worked on reeling Rahmer in for second as both drivers used the high side to get around the 3/8th mile oval.

Rahmer and Schuchart caught Macedo in lapped traffic but just as they were making ground, Macedo started to pull away.

The yellow flag flew on lap 15 for Montieth and Tim Wagaman when the two got together in turn 4. Wagaman’s crew took advantage of the work period and got the car back out on the track.

Macedo paced the field for the single file restart with Rahmer, Schuchart, Smith and Pittman lined up behind him.

Rahmer tried the bottom on the restart with Macedo going to the top into turn 1. Smith and Schuchart raced side by side down the backstretch for third with Schuchart holding the advantage at the line.

Another caution came on lap 18. This time it was for Adam Wilt who came to a stop on the backstretch.

Once again Macedo led Rahmer, Schuchart, Smith and Pittman for the restart with Jacob Allen looking to make his way into the top five while restarting sixth.

Rahmer tried the bottom again this time trying a slide job on Macedo in turns 1 and 2 for the lead. It was to no avail as Macedo held onto the top spot.

Smith got under Schuchart for third going into turn 3 on lap 24 but Logan beat him back to the line by a nose to hold on to the position.

Smith got back by Schuchart on the next lap and this time he beat him back to the flag stand to take the spot. Schuchart didn’t go away quietly and briefly took third back down the backstretch but Smith held the position at the line.

Lapped traffic came back into play on lap 27 for Macedo and the leaders.

Schuchart made quick work of Smith to take second and started to hunt down Macedo.

Logan threw everything he had at Macedo on the last lap going into turn 1 but Macedo pulled away and never looked back.

Macedo beat Schuchart to the checkered flag by .442 seconds to take the $10,000 prize and score his second win at the track. Smith crossed the line third and Rahmer held on to fourth. Pittman completed the top five.

The winged Super Sportsman last raced at Lincoln in 2017. On Saturday night they were back in action as part of their Touring Series.

Russ Mitten lined up on the pole of the 20-lap feature with John Edkin sharing the front row.

Mitten took the lead when the green flag dropped with Luke Deatrick and Edkin battling side by side for second.

Kenny Edkin was up to third at the line on lap 1 after starting the feature sixth. Edkin was victorious in the first four stops of the touring series so far in 2020.

Kenny made quick work of John to take second on the next lap. Scott Dellinger was up to fourth from his seventh starting spot and had his eyes set on taking third from John.

Kenny Edkin was working on reeling in Mitten to challenge him for the race lead when the caution came out on lap 8 for Adam Wray. Wray had spun out in turns 3 and 4.

Kenny, John, Dellinger and Frankie Herr lined up behind Mitten for the single file restart.

Mitten and Kenny both went to the bottom in turn 1 as that was the preferred line around the track.

Kenny was on Mitten’s bumper at the half way point of the race trying to take the lead from the six-time Lincoln feature winner.

The yellow flag came out on lap 11 for Tyler Wolford and Jay Fannasy who got turned around in turns 1 and 2. Both drivers were able to rejoin the field.

The leaders dove to the bottom going into turn 1 again on the restart.

Dellinger was working on getting his nose under John for third and the two were side by side at the line on lap 14 for the spot with John holding on to the position.

Another caution came on lap 14. This time it was for Doug Holler who got spun around in turn 4.

Mitten was able to pull away from Kenny down the backstretch but Edkin would close the gap in the corners.

Herr got by Dellinger for fourth coming out of turn 1 with five laps to go.

Kenny had closed the gap and was in position to make a move for the lead on Mitten with two laps to go. Mitten worked hard to stay on the bottom to take the line away from Edkin.

Steve Drevicki added his name to the prestigious list of midget winners at Lincoln with his win on Saturday night. The list includes Parnelli Jones, Van May, Rico Abreu and Jimmy Maguire just to name a few.

Adam Pierson and Jamie Speers shared the front row of the 20-lap feature with Steve Craig and Tanner Allen in row two.

Pierson took the lead when the green flag dropped with Drevicki making his way to second from his fifth starting spot.

The red flag came out on lap 1 for a three car pile up in turn 1. The drivers involved were Speers, Craig and Allen.

Drevicki had the lead coming out of turn 2 on the restart and held the spot to lead lap 2. Pierson stayed with Drevicki and tried to get the top spot back while a battle ensued behind the leaders for third.

Johnson was doing his best to hold off Heydenreich as he tried to take third. Heydenreich took the spot on lap four.

Drevicki led Pierson, Heydenreich, Johnson and Curtis at the halfway point of the race.

Heydenreich was gaining on the leaders and got under Pierson in turn 2 on lap 11 for second. Eric then went to work on reeling in Drevicki for the lead.

As Drevicki and Heydenreich worked through lapped traffic the two split to get around a lapped car in turn 1 on lap 14 making for an exciting moment on the track.

On lap 17 Heydenreich was out of sorts as he battled Drevicki for the lead coming out of turn 2 and pulled off the track.

With Heydenreich out of the picture it was smooth sailing for Drevicki to the checkered flag.

Drevicki won the feature crossing the line 3.506 seconds ahead of Pierson. Johnson finished third and Curtis was fourth. Craig finished an impressive fifth after being involved in the red flag incident earlier in the race.

Heat winners were Alex Pierson and Steve Drevicki. The 14-car field of midgets included teams from Iowa, Connecticut and Delaware.

This Thursday, July 23, Lincoln Speedway is back in action with the World of Outlaws Gettysburg Clash. Time trials are at 7PM and opening ceremonies are scheduled for 7:30PM. Pit gates open at 3PM and grandstand gates opening at 4PM.