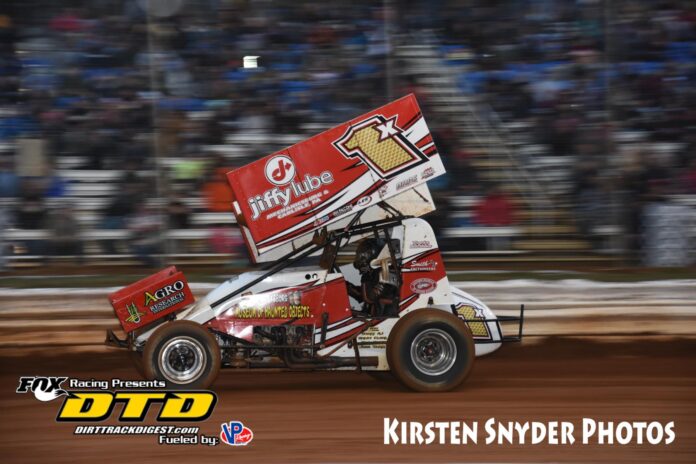 ABBOTSTOWN, PA – Chad Trout’s win at Lincoln Speedway on Saturday was an emotional one. Trout attended a memorial service on Saturday afternoon for Mike Yeaple, a veteran traffic official that lost his battle with cancer in February. Trout and Yeaple raced micros together and Trout shared a touching story in victory lane as a testament to the wonderful person that Yeaple was. Trout’s win was his fifth at Lincoln and his first of the season.

Scott Fisher and Cory Haas shared the front row for the 30-lap feature. Fisher led the field into turn 1 with Haas looking to the outside. Trout was running third with Aaron Bollinger in fourth and Bradley Howard in fifth.

Both Brandon Rahmer and Danny Dietrich passed Howard on lap 2 to move into sixth and seventh respectively.

Haas was using the top of the track to reel in Fisher. Jim Siegel got by Bollinger to move into fourth on lap 6, but Bollinger got him back on the following lap. Siegel made the pass again and held the spot on lap 8.

Dietrich followed on lap 10 getting by Bollinger for fifth.


Lap 11 saw Haas move into the lead at the line. Trout started to reel in Fisher, but the caution came out on lap 12. Tyler Ross, Chase Dietz and Glenndon Forsythe got together in turn 2. Dietz and Forsythe rejoined the field.

Haas led Fisher, Trout, Siegel and Dietrich on the restart. Trout looked to the outside of Fisher on the restart and took second. Siegel followed, moving into third.

Trout and Haas battle at the line for the lead on lap 14. Siegel closed in making it a three-car battle for the top spot.

While leading Haas slowed coming out of turn 2 on lap 16 bringing out the yellow. Haas was done for the night.

Trout inherited the lead and paced the field ahead of Siegel, Dietrich, Fisher and Bollinger for the restart.

Trout went low on the restart with Siegel opting for the high line. Trout held on to the lead and had a stronger car than Siegel in turns 1 and 2. Siegel was better in 3 and 4.

Freddie Rahmer moved into fourth on lap 18 from his 13th starting spot.

Siegel was using the top line to stay within striking distance of Trout with Trout working the bottom.

Trout claimed the $4,000 win getting to the checkered flag .963 seconds ahead of Siegel. Rahmer made a last lap pass to take third over Dietrich. Bollinger earned his first top five finish in 410 competition.

The 358 Sprint Car Summer Series Kicked-off on Saturday at Lincoln after the originally scheduled first race was rained out.

The 25-lap feature started with Jeff Rohrbaugh, who sits atop the all-time win list, on the pole. On his outside was Justin Foster, defending rookie of the year at the track, looking for his first win.

Rohrbaugh led the field into turn 1 with Foster showing his nose under the veteran racer.

The yellow flag waved on lap 3 for Tyler Esh and Jordan Strickler who got together in turn 3.

Rohrbaugh pulled away on the restart. Kody Hartlaub and Steve Owings battled for sixth behind Wanner.

Foster was reeling in Rohrbaugh as they pulled away from the rest of the field. Another caution came on lap 7 when Adrian Shaffer stopped on the track coming out of turn 2.

Hartlaub raced side by side with Wanner for fifth and took the spot on lap 8. Hartlaub got by Scott for fourth on the next lap.

As Rohrbaugh and Foster pulled away from the field, Hartlaub was reeling in Frank for third.

Lapped traffic came into play on lap 18 just as the caution came out for Zachary Cool who got turned around in turns 1 and 2.

The top five for the restart were Rohrbaugh, Foster, Frank, Hartlaub and Scott.

Hartlaub looked to the outside of Frank in turns 1 and 2 but couldn’t make the pass. Hartlaub made the pass for third coming out of turn 4.

Hartlaub caught Foster to challenge for second with five laps to go.

The top three pulled away and were racing well ahead of the field as the laps wound down.

Paulson took the lead when the green flag dropped with Rickrode in second and Dave Dissinger in third. The top three were pulling away from the field with Mark Rickrode running alone in fourth.

Dissinger was reeling in Scott for second as Paulson caught lapped traffic on lap five.

The yellow flag came out on lap 7 for Scott Rickrode who stopped in turn 4. Rickrode had been running second at the time.

Paulson and Dissinger pulled away and caught lapped traffic again with three laps to go.

Paulson got to the checkered flag ahead of Dissinger, Mark Rickrode, Grove and Thompson.