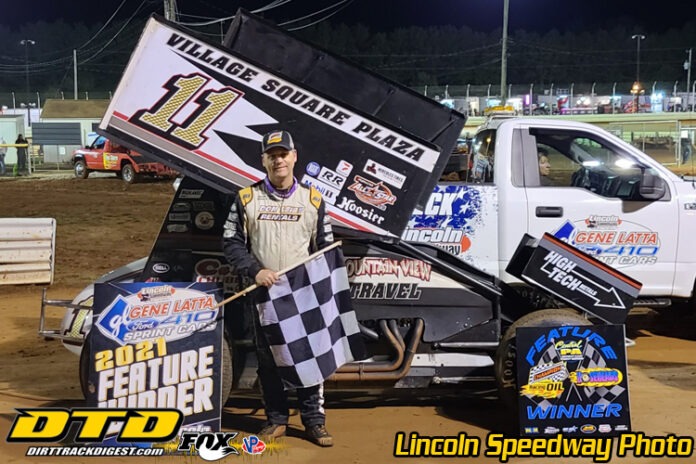 ABBOTTSTOWN, PA – In victory lane TJ Stutts was not shy about sharing that the World of Outlaws format is his favorite as a driver. The format worked in Stutts’ favor on Saturday night in Lincoln Speedway’s Outlaw Tune-up. Stutts timed third quick against a field of 37 cars, won his heat, the dash and the $4,000 to win feature. Stutts’ win was his first 410 victory at Lincoln, he has three wins in the 358 division at the track.

After winning the 6-lap dash, Stutts started on the pole. Current point leader, Alan Krimes, lined up second for the start of the 30-lap feature.

Stutts led the field into turn 1 with Krimes, Chase Dietz and Jim Siegel racing behind him.

Anthony Macri got by Dylan Cisney on the start to get into the top five. Macri got under Siegel in turns 1 and 2 on lap 4 for fourth. Freddie Rahmer went to work on Siegel for fifth.

Lapped traffic loomed ahead of Stutts on lap 6 as Krimes and Dietz battled for second. Dietz took the runner-up spot coming out of turn 4 on lap 7.

Dietz was using the high line leaving the bottom open for Krimes to stay close. Macri closed in on the top three as they worked their way through lapped traffic.

The first caution of the race came on lap 15 for Matt Campbell when he was sitting backwards in turns 1 and 2.

Stutts led Dietz, Krimes, Rahmer and Macri to the cone for the restart.

Dietz got a good run on Stutts and looked to the inside of the leader in turns 1 and 2. Dietz tried a slider in turns 3 and 4 and had the lead for a moment before Stutts took it back coming out of turn 4.

Macri got fourth back from Rahmer but Rahmer took the spot back at the line. Macri and Rahmer continued to battle as the two swapped positions multiple times each lap.

Stutts was pulling away from Dietz and the rest of the field as he caught lapped traffic again with seven laps to go.

The battle for fourth and fifth between Rahmer and Macri was still hot as the laps wound down.

Dietz closed in on Stutts with two laps to go. Dietz was all over Stutts on the last lap and gave it all he had as they raced to the checkered flag. Stutts crossed the line .064 ahead of Dietz. Krimes finished third. Rahmer got back by Macri one last time to take fourth by .001 seconds at the line.

Stutts’ win was his first in the 410 division since 2019 and he shared in victory lane, “If you would have asked me two week ago, I was ready to retire and put someone else in.” Next up at Lincoln is the first round of the PA Posse vs. World of Outlaws battle in the Gettysburg Clash on Wednesday.

The second race of the Super Sportsman Touring Series went to Mike Enders on Saturday night at Lincoln Speedway.

Enders lined up on the outside of pole-sitter Dave Hollar for the start of the 25-lap feature.

Enders led the field into turn 1 with Chase Gutshall and Jay Fannasy battling for third and fourth behind Hollar.

Gutshall took third and left Fannasy to hold off Scott Dellinger as he battled Fannasy for fourth.

As the top five raced for position behind him, Enders pulled away from the field.

Fannasy got by Hollar Gutshall to move into third. Dellinger followed moving up to fourth and sending Gutshall back to fifth.

Gutshall was faced with holding off Kenny Edkin, the winner of the first Touring event of 2021, as he challenged Gutshall to get into the top five.

Edkin got by Gutshall and started working on Dellinger for fourth. Dellinger had his eyes on third as he worked on Fannasy. Dellinger took the spot on lap 12 at the line and then brought out the caution on lap 12 as he spun out in turn 1. Matt Ondek was also collected in turn 1.

Enders led Hollar, Fannasy, Edkin and Gutshall to the cone for the single-file restart.

Russ Mitten got under Gutshall on the restart to enter the top five. Frankie Herr followed sending Gutshall back to seventh.

Edkin was working on Fannasy for third when the caution came out on lap 14. Rich Eichelberger and Luke Deatrick got together in turn 4.

The top five for the restart were Enders, Hollar, Fannasy, Edkin and Mitten.

A four car battle for second was under way between Hollar, Edkin, Fannasy and Mitten. Fannasy took the runner-up spot on lap 17.

The yellow flag waved again on lap 18 when Dellinger stopped on the front stretch.

Fannasy restarted second behind Enders and was closing in on the leader. Mitten got by Hollar for third.  Edkin got by Hollar on lap 21 to take fourth and Herr followed on the next lap.

McClane led the field into turn 1 with Palm in second and Donnie Broderick in third.

The yellow came out for Chase Rehbein before a lap was in the books when he got turned around in turn 4.

The field lined up for a complete restart. Once again McClane took the lead when the green flag dropped. Broderick used the outside to get by Palm for second.

Jeremy Stremmel, Michael Goodwin and Hunter Fulton raced in a three-car battle for fourth behind the leaders.

Lap 3 saw the second caution of the race when Palm fell off the pace and stopped in turn 4. Palm was running third.

Broderick restarted second and looked to the inside of McClane in turn 4 but McClane held on to the lead.

McClane and Broderick pulled away from the rest of the field as Fulton and Stremmel raced wheel to wheel at the line on lap 6. Stremmel took the spot on lap 7 as Bob Scott Jr joined the battle. Scott was up to fourth from his 15th starting spot on lap 8.

The yellow waved on lap 9 as Stremmel sat backwards in turn 4.

The top five for the restart were McClane, Broderick, Goodwin, Scott and Fulton.

Scott raced wheel to wheel with Goodwin at the line on lap 10 to take third.

Rehbein battled Fulton to get into the top five and got by him on lap 11. Fulton got back under Rehbein to try and take the spot back but Rehbein held on to fifth.

Rehbein was racing wheel to wheel with Goodwin for fourth when the caution came out on lap 15. Goodwin had spun out in turn 1 after shredding a right rear tire.

Scott looked under Broderick on the restart to try and take the runner up spot. Rehbein joined making it a three-car battle for second.

The final caution of the race came on lap 17 for Will Long and Hunter Fulton.

McClane held off Broderick, Scott, Rehbein and Jordan Fulton on the final restart to take the checkered flag.

This Wednesday, May 12, Lincoln Speedway is back in action with World of Outlaws in the Gettysburg Clash. Time trials are at 7PM, Opening Ceremonies are at 7:30PM with pit gates opening at 2PM and grandstand gates opening at 4PM. 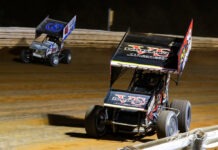 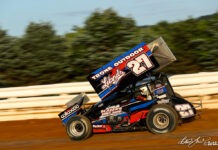 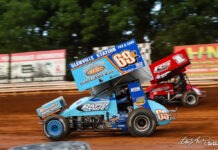