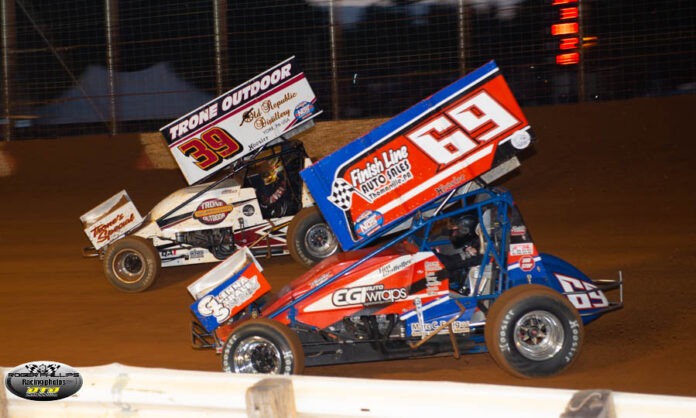 ABBOTSTOWN, PA – Chase Dietz had been knocking on victory lane’s door all season long. Going into Saturday night’s racing action Dietz had seven top 10 finishes, including two seconds, two thirds a fourth and a fifth. Dietz finally cashed in on the speed he and the Trone team have found this season with a late race pass for the win Saturday night.

Dietz spoke to the success the team has had in victory lane, “We’ve been good here about every race. We got a lot better tonight and were in the right spot at the right time.”

Billy Dietrich started on the front row and led the first 26 laps of the 30-lap feature. Dietz lined up ninth and ran down Dietrich in lapped traffic. “Billy was running a good race and I figured it was going to come down to the lapped cars,” said Dietz.

It was a close finish, with Dietz getting to the checkered flag .123 seconds ahead of Dietrich. Dietz knew it was going to be a close finish in the final turns, “Like the rest of them it came down to the end and we ended up on top.”

Dave Brown started on the pole. Dietrich and Tim Glatfelter raced three-wide with Brown at the start with Dietrich taking the lead and Glatfelter moving up to second. Landon Myers was running fourth and got under Brown for third in turns 1 and 2 on lap 2.

Dietz and Tyler Ross each took a side to get around Brown for fourth and fifth. Myers got by Glatfelter for second on lap 3. Glatfelter stayed close and was using the high line to try and take second back. Glatfelter took the runner-up spot back at the line on lap 6.

Dietz drove by Myers coming out of turn 2 for third on lap 9.

Dietrich had racked up a 2 second lead over Glatfelter and the rest of the field as he approached lapped traffic a third of the way through the race.

Dietz was reeling in Glatfelter to challenge for second when the caution came out on lap 12 for Aaron Bollinger who stopped on the front stretch.

Glatfelter, Dietz, Myers and Ross lined up behind Dietrich for the restart.

A four-car battle was on for second between Glatfelter, Dietz, Myers and Ross. Dietz won the battle and took second on lap 13. Glatfelter and Myers continued to battle for third. Ross fell back and was being challenged by Freddie Rahmer for fifth.

Dietrich entered lapped traffic on lap 18 with Dietz closing in. Dietrich made quick work of the first lapped car and started to pull away, taking his lead back up to over one second. As the leaders worked through lapped traffic Dietz had whittled Dietrich’s lead back down to under a second.

Dietz took the lead at the line with three laps to go. Dietrich took the lead back in turns 1 and 2 with Dietz taking over the top spot down the back stretch.

A lapped car loomed ahead of Dietz when the white flag waved. Dietz got hung up behind the lapped car in turns 3 and 4 allowing Dietrich to make one last attempt for the win. Dietz won a close one over Dietrich with Rahmer crossing the line third. Ross finished fourth and Myers held on to finish fifth. Rahmer was the hard charger advancing 12 positions, from 15th to 3rd.

Hayden Miller and Cody Fletcher, both having wins under their belts already this season, shared the front row for the 20-lap feature on Saturday night.

Fletcher and Miller made contact in turn 1 on the initial start with Miller spinning and Fletcher continuing on. Miller was not the only one with issues in turns 1 and 2 at the start. Jon Stewart and Justice Forbes got together in turn 1. Bruce Garner was turned around in turn 1 and Brett Strickler was stopped coming out of turn 2. Kody Hartlaub sustained damage and headed to the pits for repairs.

Miller, Stewart, Garner, Strickler and Hartlaub rejoined the field for the complete restart.

Fletcher shared the front row with Matt Findley as the field lined up side by side.

Fletcher took the lead with Steve Owings driving by Findley to take second. Findley and Cappetta raced side by side for third with Cappetta taking the spot. Before the lap was completed the caution waved again. Tony Hippensteel, Kyle Rohrbaugh and Zachary Cool were all stopped in turn 4.

The field lined up for their third attempt at starting the race. The third time was a charm as Fletcher once again took the lead.

Owings went to the top but could not get by Findley this time for second in turns 1 and 2. Owings took the spot in turns 3 and 4.

It didn’t take long for Owings to track down Fletcher and the two raced wheel to wheel for the lead on lap 2. Fletcher held on to the top spot as the caution flag flew again. Garner was stopped on the inside of turn 4.

Owings ran the top looking to take the lead from Fletcher. When the top did not prove fruitful, Owings moved to the bottom of turns 3 and 4 nearly taking the lead at the line. Owings took the top spot on lap 6. Fletcher stayed close and took the lead back on lap 7.

The caution flag waved on lap 7 when Justin Foster fell off the pace on the front stretch.

Fletcher led Owings, Findley, Rohrbaugh and Adrian Shaffer to the cone for the restart.

Once again Owings went to the top while Fletcher stuck to the bottom. Owings got a good run coming out of turn 2 on lap 12 to reel Fletcher in, but Hartlaub brought out the caution in turn 1 before the lap was completed.

Another caution on the restart came when Garner and Hippensteel got spun around in turn 2.

The field got one lap in on the restart before yet another caution on lap 13. Garner, Strickler, David Holbrook, Hippensteel, Zach Euculano and Shane Yost got together in turn 4.

Yet again Fletcher held off Owings on the restart and yet again the yellow flag flew on lap 14. Garner spun out in turn 4. The yellow turned into an open red for teams to refuel.

Fletcher held off Owings on the restart and the field completed the final six laps incident free. 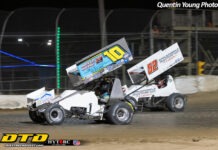 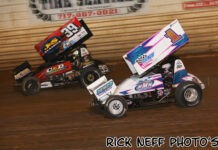