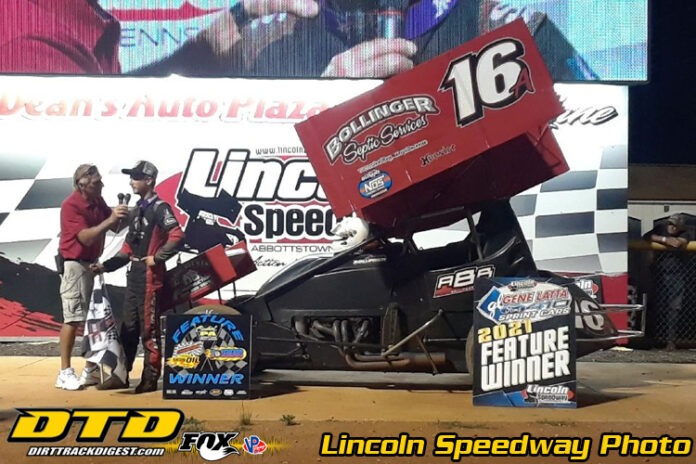 ABBOTSTOWN, PA – Aaron Bollinger has been turning heads since his debut in the 410 sprint division last year. The young driver put together a solid night to park his family owned #16A sprint car in victory lane for the first time on Saturday night. An emotional Bollinger was at a loss for words, “I don’t even know what to say. We just won a feature with the baddest race cars on the planet.”

Making his first victory even sweeter is that it came on his father’s birthday. Bolling shared, “It’s just me and Dad in the garage. It’s tough.” Bollinger held true to the promise he made to his dad, that he would win the race for his birthday.

Bollinger won the race without brakes, “About five to go we blew every single brake pad out of this thing. Yeah, they blew out, I was nervous. We got it done and that’s all that matters.”

Brie Hershey started on the pole of the 30-lap feature with Chris Arnold lined up second.

Hershey and Arnold were wheel to wheel coming out of turn 2 with Hershey taking the advantage down the back stretch to lead lap one.

Jordan Givler fell off the pace on lap 2 but pulled into the infield preventing the yellow flag from coming out.

Scott Fisher, Matt Campbell and Bollinger battled for third behind the leaders with Campbell taking the spot on lap 4.

Bollinger got by both Fisher and Campbell on lap 5 to take third.

On lap 10 Bollinger took second from Arnold at the line.

Bollinger made quick work of reeling in Hershey and used the bottom of turns 3 and 4 to take the lead on lap 12.

Lapped traffic loomed in front of Bollinger at the half-way point of the race.

Cory Haas was working his way to the front of the field from his eighth starting spot. Haas was running fifth on lap 14.

Haas made it a three-car battle for third with Campbell and Arnold.

Bollinger was checked out from the rest of the field as plenty of battles for position waged on behind him. Haas tracked down Hershey for second and made the pass in turns 3 and 4 to take it with 10 laps to go.

Campbell followed and took third from Hershey as they raced down the back stretch on lap 22.

Brandon Rahmer by Hershey for fourth and brother Freddie Rahmer followed entering the top five with four laps to go.

Bollinger won his first career 410 feature by 2.814 seconds over Haas. Campbell crossed the line third. Freddie got by Brandon late in the race for fourth, with Brandon holding on to finish fifth.

The USAC East Coast Sprint Cars made their first trip back to Lincoln since 2019 on Saturday night. The last time the series was at Lincoln, Steve Drevicki parked his car in victory lane.

Joey Amantea started on the pole of the 25-lap, $1,500 to win feature with Drevicki lined up to his outside.

Drevicki led the field into turn 1 on the initial start, but the yellow flag came out before a lap was completed. Colin White got spun around in turn 2.

The field lined up for a complete restart and this time Amantea and Drevicki raced wheel to wheel into turn 1 with Drevicki taking the lead coming out of turn 2.

Alex Bright got by Amantea for second and Chris Allen followed to take third.

The yellow flag waved again on lap 7 when Blaine Emery got turned around in turn 2.

Drevicki, Bright, Allen, Damon Pau and Kenny Miller were the top five for the restart.

Bright tried a slider in turns 3 and 4 for the lead but Drevicki held the top spot.

Paul got by Allen on the restart to take third.

Bright was searching for a way by Drevicki and dove under the leader again in turns 3 and 4 to try and take the lead. After the slider Drevicki and Bright were wheel-to-wheel at the line on lap 11 with Drevicki having the slight advantage.

As the top two continued to duke it out for the lead, Miller got by Allen for third.

Another slider by Bright on lap 14 in turns 3 and 4 did not stick. Four laps later the leader entered lapped traffic but that did not cool down the battle for the lead.

Bright was still searching for a way around Drevicki with five laps to go. The caution came out on lap 22 when Allen got turned around in turns 3 and 4.

Drevicki held off Bright on the restart in turns 1 and 2 but Bright threw a slider in 3 and 4 and the two raced side-by-side at the line with two laps to go.

Bright took the lead on the inside coming out of turn 2 leaving Drevicki to fend off Miller. Miller got by Drevicki for second on the final lap in turn 2 but Drevicki took the spot back on the back stretch.

Steve Buckwalter and Tommy Kunsman made up the front row of the ARDC Midget 20-lap feature.

Buckwalter took the lead when the green flag waved, but Joe Thomas and Mike Markey got spun around in turn 4 before a lap was in the books bringing out the caution flag.

The field lined up for a complete restart. Buckwalter took the lead again as Kunsman and Wanner battled for second behind him.

The yellow flag waved again on lap 1 when JR Booth got sideways on the inside of turn 4.

Buckwalter held off Kunsman on the restart as Wanner and Glenn battled wheel to wheel behind them. Glenn took third at the line.

Woody, Markey and Eric Heydenreich had a three-car battle going for fifth. Woody had the spot and went to challenge Wanner for fourth. Wanner and Woody were wheel to wheel at the line on lap 7 with Woody holding the slight advantage.

Lap 8 saw another caution lap 8 when Markey got turned around in turn 2. He had been running sixth.

The top five for the restart were going to be Buckwalter, Kunsman, Glenn, Woody and Wanner but Wanner went to the pits during the caution and Woody was penalized two spots for driving under the cone on the last restart.

After the adjustments the top five for the restart were Buckwalter, Kunsman, Glenn Heydenreich and Zach Curtis.

The top three were nose to tail going into turn 1. After the penalty, Woody got back up to fifth on the restart and then got by Heydenreich in turns 3 and 4 for fourth.

Kunsman was searching the track for a way by Buckwalter and was on his bumper in the turns.

Buckwalter pulled away as the laps wound down leaving Kunsman to hold off Glenn who was challenging for second.

The top three were pulling away from the field when the caution came out with one lap to go when Thomas spun out in turn 2 right in front of the leaders.

Kunsman, Glenn, Woody and Markey lined up behind Buckwalter for the restart with one lap to go.

Buckwalter beat Kunsman to the checkered flag by .248 seconds. Glenn crossed the line third and Woody was fourth. Despite being caught up in two incidents during the feature, Markey rebounded for a fifth place finish.

Next Saturday, June 12, Lincoln Speedway is back in action with the 10th and final Fallen Firefighters Night in Memory of Brandon Little featuring the 410 Sprint Cars and 358 Sprint Cars. Racing starts at 7:30PM with pit gates opening at 5PM and grandstand gates opening at 5:30PM. 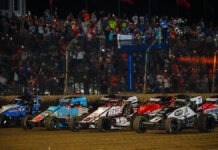