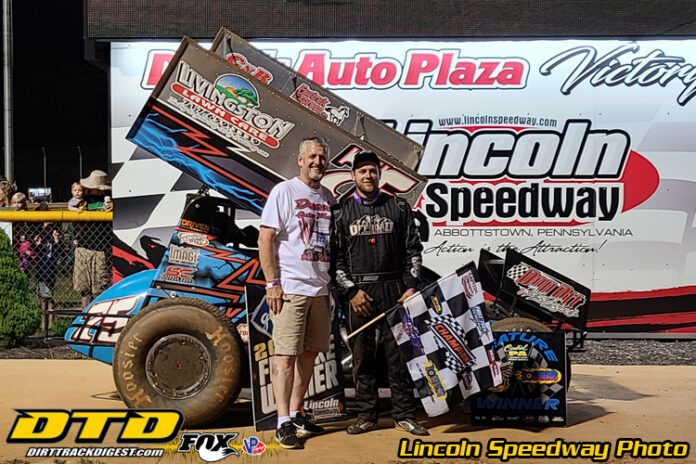 ABBOTSTOWN, PA – Going into Saturday night Tyler Ross had struggled the past few races, “We didn’t have a very good Speedweek.” But all that changed on Dean’s Auto Plaza Night, “This thing has been a rocket ship all night.” Ross continued, “She was driving like a Cadillac out there.” Ross and the Lefever Electric team turned things around in a big way, winning $5,000 in their second victory of the 2021 season. Ross wired the field in the 30-lap feature, “The car was that good. I could put it anywhere I wanted.”

Tyler Ross and Bradley Howard shared the front row for the start of the main event. Ross took the lead with Jim Siegel moving by Howard for second at the line. Howard battled back but settled for third.

Troy Wagaman used the bottom of turns 3 and 4 to take third at the line from Howard on lap 2. Howard battled back coming out of turn 2 to take third back by a nose on lap 3.

Troy took back the third spot on lap 4 and pulled away.


There was plenty of racing throughout the field including a four car battle for seventh between Alan Krimes, Freddie Rahmer, Tim Glatfelter and Matt Campbell.

Tim Wagaman was up to fourth after getting by Howard and Brandon Rahmer followed to get up to fifth.

The only caution of the race came on lap 13 when Kurt Conklin stopped on the back stretch.

Ross led Siegel, Troy, Tim and Brandon to the cone for the single file restart.

Siegel looked to the bottom, but Ross held the lead. Troy was on Siegel’s bumper challenging for second.

Ross encountered lapped traffic again on lap 21 and started pulling away from the rest of the field.

Campbell joined the battle for fifth. Krimes also wanted the spot, making it a four-car battle.

Ross got to the checkered flag 2.776 seconds ahead of Siegel. Troy crossed the line third with Tim in fourth. Brandon held on to fifth to complete the top five.

Jordan Strickler and Zachary Allman shared the front row to start the $2,000 to win 20-lap feature. Jordan took the lead when the green flag dropped with Allman in second.

Matt Findley was running third and looked to the inside of Allman. With Findley and Allman battling for second it allowed sixth starting Brett Strickler to get by for third on lap 1.

Brett used the top line around the track to get by Allman for second on lap 2. Findley held on to fourth with Zane Rudisill running fifth.

Jordan utilized the bottom groove with brother Brett ripping around the top.

The Strickler brothers raced wheel to wheel at the line on lap 4. Jordan had the lead by inches at the line, but Brett had the advantage coming out of turn 2.

Rudisill got by Allman at the line to take third on lap 6.

Brett and Jordan were pulling away from the rest of the field.

Lap 8 saw Kody Hartlaub get by two cars to move up from sixth to fourth.

As Brett approached lapped traffic at the halfway point, he was pulling away from Jordan.

A three car battle for third was brewing between Rudisill, Hartlaub and Findley. Hartlaub got under Rudisill in turn 2 to take third, but Rudisill got him back at the line.

Rudisill was closing in on Jordan as the laps wound down.

The non-stop feature went to Brett Strickler. He got to the checkered flag 2.284 seconds ahead of brother Jordan. Rudisill crossed the line third and Findley was fourth. Hartlaub rounded out the top five.

Jimmy Combs and Connor Cantwell shared the front row for the 20-lap Classic Car feature on Saturday night. Combs took the lead at the start with Connor Cantwell settling in second in turn 1. Steve Clemo ran in third as Joe Brown challenged him for the spot.

The yellow flag came out on lap 1 when Dylan Brown got into the wall in turn 2.

Combs let Connor, Clemo, Joe Brown and Roland Brown to the cone for the restart.

Joe got by Clemo for third and Roland followed sending Clemo back to fifth.

Joe and Roland Brown raced for third with Roland taking the spot in turn 2. Roland started reeling in Connor for second and took the spot at the line on lap 7. Contact was made between Roland and Connor allowing Joe to move into third. Connor fell back to fourth.

Another caution came on lap 8 when Jim Rost Jr stopped on the front stretch.

The top five for the restart were Combs, Roland, Joe, Connor and Clemo.

Combs held the lead on the restart with the top three pulling away from the rest of the field.

Roland looked to the inside of Combs coming out of turn 4 but did not make the pass.

Connor caught back up to Joe to challenge for third when the caution flag waved on lap 12. Steven Cantwell stopped on the bottom of turn 2.

Lap 13 saw another yellow flag when Sharon Unitas and Ron Grove got together in turn 2.

Jim got under Connor and Clemo followed sending Connor back to sixth.

The final caution of the race came with two laps to go. Connor did a 360 spin in turn 2 and kept going eventually coming to a stop on the back stretch.

Combs led Roland, Joe, Jim and Clemo on the two-lap shoot out to the checkered flag.

Next Saturday, July 17, Lincoln Speedway is back in action with Pepsi Night featuring the 410 Sprints, 358 Sprints and ARDC midgets. Racing starts at 7:30PM with pit gates opening at 5PM and grandstand gates opening at 5:30PM.