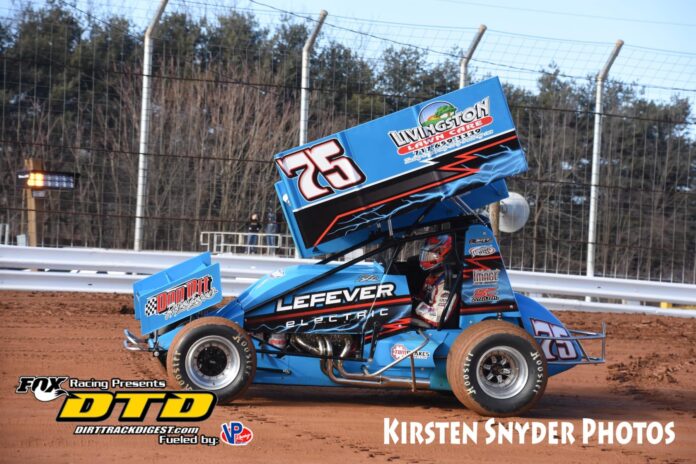 ABBOTSTOWN, PA – Tyler Ross came out on top after a non-stop 30-lap feature on Saturday night. The first thing he shared in victory lane was, “They need to shorten these races up.” It was a long night for Ross and the Lefever team, “Today we worked our butts off. We had this rear end out two times. We had all kinds of problems.” Despite the problems the team faced, Ross earned his third win of the year at Lincoln, “I can’t believe this is the third time this year.”

Kyle Moody took the lead at the start of the race and Ross hunted him down in lapped traffic, “I know I ran Moody down; he was good until we got into lapped traffic there.”

The pass for the lead was not the only excitement on the track as there was passing throughout the field. Ross said in victory lane, “This track was phenomenal tonight.”

Landon Myers drew the pole for the 30-lap Leffler Energy Night feature. Kyle Moody lined up to his outside with Tyler Ross and Chad Trout in row two.

Myers had the advantage when the green flag dropped and pulled a wheelie as he started down the front stretch. Moody took the lead from Myers as they drove out of turn 2 and led lap 1.

Gerard McIntyre got by Chad Trout for fourth as Tyler Ross caught Myers to battle for second.

Myers and Ross raced wheel to wheel on lap 6 at the line for second with Myers holding off the charge from Ross.

Moody entered lapped traffic on lap 7. As Myers caught the tail end of the field Ross had reeled him back in.

Ross got by Myers for second on lap 11. McIntyre was not far behind as he closed in on Myers for third.

As the halfway point of the race was approaching, Ross was closing in on Moody for the lead. The race for first was wheel to wheel at the line on lap 17 with Ross taking the top spot by inches.

Moody raced back to the lead at the line on lap 18. The battle continued as lapped cars loomed ahead. Ross took the lead back on lap 19.

Devon Borden drew the worst pill in the redraw and lined up ninth for the feature. Borden had been charging to the front of the field and made his way into the top five on lap 19.

Ross was pulling away from the rest of the field as a three-car battle for second between Moody, Myers and McIntyre was waging behind him.

With his win on Saturday night, Jeremy Ott is now only one win away from tying Jason Rochelle at the top of the All Time Legends Win List at Lincoln. Ott’s win was his ninth at the track.

Ott shared the front row of the 20-lap feature with pole-sitter Aaron Updegraff. Ott led the field into turn 1 with Updegraff in second holding off a charge from Owen Dimm. Dimm looked to the outside of Updegraff and made the pass for second with Travis McClelland and Logan Carbaugh following right behind.

Dimm looked under Ott for the lead down the back stretch with Ott holding the lead at the line. Dimm, a rookie in the division, continued to battle the veteran, Ott, for the top spot.

Logan Carbaugh was working on Dimm for third when the caution came out on lap 6 for debris.

Ott led the field for the restart with McClelland and Dimm continuing their fight for second. Carbaugh and Bob Stough joined making it a four-car battle. Carbaugh looked to the outside of Dimm and took third on lap 7. Stough followed sending Dimm back to fifth.

Stough was all over Carbaugh trying to take third. Stough tapped Carbaugh’s bumper and got out of shape, allowing Dimm to reclaim fourth.

Stough was holding off Dimm as he challenged for fourth.

The top five were running nose to tail when the yellow flag waved on lap 17 for Preston Alleman who stopped in turns 1 and 2.

Ott led McClelland, Carbaugh, Stough and Dimm to the cone for the restart with three laps to go. Stephen Wurtzer, who had charged through the field from his twelfth starting spot, challenged Dimm for fifth on the restart. Wurtzer made the pass to get into the top five with one lap to go.

McClelland made one last try for the win, but Ott beat him to the checkered flag by .168 seconds. Carbaugh crossed the line third and Stough was fourth. Wurtzer completed the top five.

The Mid Atlantic Modifieds made their second stop of the season at Lincoln on Saturday night. Ray Kable and Alyssa Rowe shared the front row of the 20-lap feature.

Rowe used the outside to take the lead coming off turn 2 with Kable running second. Justin Cullum and Rick Hulson raced side by side behind the leaders for third.

Kable took the lead at the line on lap 2 from Rowe. Cullum took over third and was holding off three cars challenging for the spot behind him.

The first caution came out on lap 3 when Tony Wuest got spun around in turns 1 and 2.

Cullum took second on the restart. The field saw another caution on lap 4 with Jared Spalding, Doug Ostwald and Wuest spun around in turn 3.

The field lined up for another Delaware style restart behind Kable. Cullum, Rowe and Altobelli raced three-wide at the line for second. Altobelli took second with Rowe in third and Cullum in fourth.

Cullum got by Rowe for third. Altobelli used the high line to take the lead coming out of turn 2 on lap 7.

Steve Axtell got by Rowe for fourth.

Altobelli was pulling away from the field at the halfway point of the race. Cullum was sticking his nose under Kable for second, but Kable held the spot.

The caution came out on lap 12 for Wuest and Cole Nagle in turn 2.

Altobelli led Kable, Cullum, Axtell and Hulson on the restart. Cullum got by Kable for second on the restart, but Kable got back under Cullum to reclaim second coming out of turn 2. Kable held the spot by a nose at the line.

Cullum was being challenged by Axtell for third and Axtell took the spot.

Altobelli swept the Mid Atlantic Modified features at Lincoln in 2021 with his win. Kable held on to finish second with Axtell crossing the line third. Cullum was fourth and Hulson completed the top five.

Next Saturday, August 21, Lincoln Speedway is back in action with the Inaugural Barry Skelly Memorial with the 410 and 358 Sprint Cars. It is also Night #1 of the 410 Sprint Lincoln/Trail-Way Shootout. Racing starts at 7:30PM with pit gates opening at 5PM and grandstand gates opening at 5:30PM.