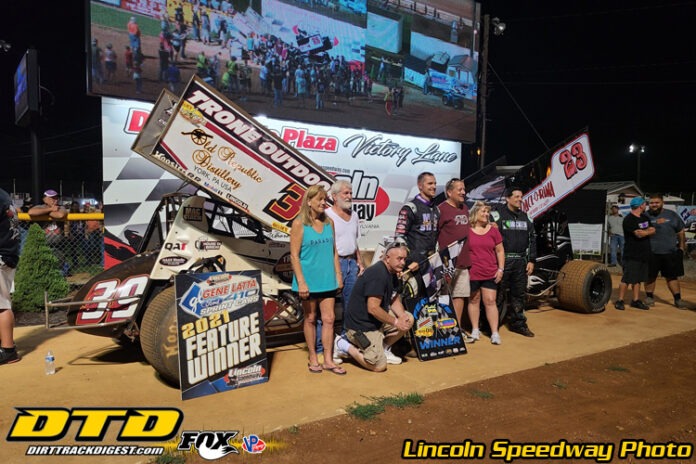 ABBOTSTOWN, PA – The Inaugural Barry Skelly Memorial honored the life of Lincoln’s long-time track photographer. Skelly was not only a photographer, he was a champion for dirt track racing, sharing his love for the sport with fans and drivers through his photos.

Chase Dietz celebrated his second win of the season at Lincoln with the fans surrounding victory lane by high fiving those along the fence as they cheered him on. After the celebration Dietz reflected on his most recent win, “The way the track was it was more of trying to stay a little patient which is what I’ve been struggling with.”

Going into Saturday night, Dietz had two DNFs and a twelfth place finish in his last three features, “The guys put in all the work. I was at the beach this week, so these guys did everything. They stuck around for all the rough nights we have had here lately.”

Starting next week, Central PA will kick off it’s month of money, “Hopefully we pick off a couple more here before the end of the year. Big weekend coming up next week with the All Stars coming in. We’re definitely ready to get them.”

Reflecting on the win in honor of Skelly Dietz shared, “We’re happy to be able to do this for Barry and be here in memory of him. He was a very big part of Lincoln Speedway and obviously the racing community in general.”

Brie Hershey and Trey Hivner shared the front row for the start of the 30-lap feature.

The red flag waved on the first lap for Tim Wagaman who flipped down the front stretch. Matt Campbell’s car also had damage. Campbell utilized time in the work area and rejoined the field for the complete restart.

Hivner went to the bottom of turn 1 to take the lead. Jim Siegel and Chase Dietz battled side by side for second with Dietz holding the spot.

Aaron Bollinger got by Jordan Givler for fourth coming out of turn 2 on lap 4.

Hivner made contact with the wall in turn 4 on lap 5. The misstep allowed Dietz to close in and take the lead on lap 7. Dietz entered lapped traffic after taking the lead.

Devon Borden got by Givler on lap 9 to work his way into the top five. In his first race back at Lincoln since Speedweek, Danny Dietrich was on the move from his twelfth starting spot.

Borden raced his way up to fourth on lap 13.

Dietz had a lead of 2.820 seconds at the halfway point over Siegel as Dietrich made his way into the top five.

Borden was closing in on Bollinger for third and Dietrich was reeling in Borden.

Borden got under Bollinger and Dietrich followed sending Bollinger to fifth.

Dietrich and Borden raced wheel to wheel at the line for third with Dietrich having the advantage on lap 21. Borden took the spot from Dietrich on lap 22.

Dietz was in heavy lapped traffic allowing Siegel to close in. With five laps to go Dietz’s advantage was down to 1.758 seconds.

The three car battle for second between Siegel, Borden and Dietrich was cut short when the caution came out on lap 26 for Glenndon Forsythe who fell off the pace on the front stretch.

Dietz led Siegel, Borden, Dietrich, and Bollinger to the cone for the late race restart.

Alan Krimes was looming right outside the top five on the restart after making his way to sixth from his fifteenth starting spot.

Krimes got by Bollinger on the back stretch to get into the top 5 with two laps to go.

Dietz crossed the line .779 seconds ahead of Siegel for the win. Borden finished third and Dietrich was fourth. Krimes earned the hard charger honors with this fifth place finish.

Saturday’s feature was the 400th for the 358 sprint car division at Lincoln Speedway. The first race for the 358 sprints was held on August 12, 1989, with the win going to Jimmy Sheaffer. Kody Hartlaub added his name to the impressive list of winners that includes Doug Esh, Chris Eash, Steve Siegel, and many more with his Inaugural Barry Skelly Memorial victory.

Kyle Rohrbaugh and Mason Chaney shared the front row for the 20-lap feature and the two raced side by side at the flag stand when the green flag dropped.

Rohrbaugh had the lead coming out of turn 2.

Kody Hartlaub was running third with Wyatt Hinkle in fourth.

Hartlaub caught Chaney and made the pass for second coming out of turn 4 on lap 2. CJ Tracy got by Hinkle for fourth and then the yellow flag flew when Dylan Orwig got turned around in turns 3 and 4.

Rohrbaugh led Hartlaub, Chaney, Tracy, and Hinkle for the restart.

Hartlaub went low into turn 1 to make a run for the lead but Rohrbaugh held onto the top spot. Hinkle got by Tracy on the restart to get back up to fourth.

Hartlaub was using the bottom line around the track a Rohrbaugh ran the top.

Zane Rudisill used the outside of turn 4 to get by Tracy and entered the top five on lap 9 before the caution came out. Travis Leh was off the pace and came to a stop in turn 4.

The top five for the restart were Rohrbaugh, Hartlaub, Hinkle, Chaney and Rudisill.

Once again Hartlaub opted for the bottom of turn 1 on the restart with Rohrbaugh holding the top spot using the high line. Rudisill got a run coming out of turn 2 to get by Chaney for fourth on lap 12.

Steve Owings caught Chaney and battled to work his way into the top five.

Lapped traffic loomed ahead of the leaders with five laps to go. Hartlaub was on Rohrbaugh’s bumper and pulled a slider in turns 1 and 2 for the lead. Rohrbaugh tried to return the favor in turns 3 and 4, but Hartlaub held the position.

Owings got by Chaney to get into the top five on lap 16 and Tracy followed sending Chaney back to seventh.

The checkered and red flags came out simultaneously as Rudisill stumbled coming out of turn 2. Hartlaub won the race ahead of Rohrbaugh, Hinkle, Owings, and Tracy. The hard charger honors went to Cody Fletcher who drove from twenty-second to ninth.

Next Saturday, August 28, Lincoln Speedway is back in action with All Star Circuit of Champions in the Kramer Klash plus the Central PA Legends. Racing starts at 7:30PM with pit gates opening at 5PM and grandstand gates opening at 5:30PM.

To get all the latest news, results, schedule changes and rule changes, visit Lincoln Speedway’s website at http://www.lincolnspeedway.coo stay up-to-date on all the action or pending weather conditions at Central Pennsylvania’s “Premier” Saturday night racetrack – The Fabulous Lincoln Speedway.