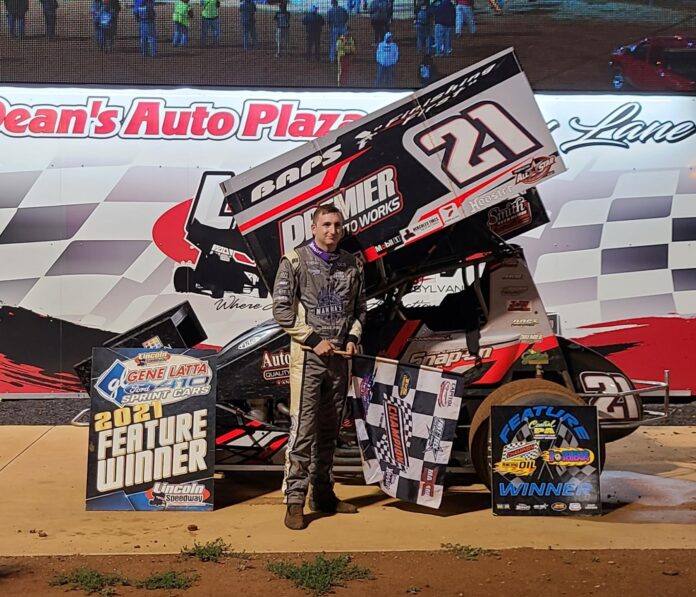 ABBOTTSTOWN, PA – Freddie Rahmer locked up the 2021 410 Sprint Car Championship prior to Saturday’s Night of Champions event. The final win of the season was still up for grabs though and four of the top five in the feature line-up were looking for their first Lincoln win of the season.

Matt Campbell lined up third and was up to second on the first lap, “The beginning that was pretty good racing. I was right there with Billy.”

Campbell stuck with Billy Dietrich early in the race, “I figured I had 30 laps just stay with him and wait until we get to the traffic and then be able to move around.”

Dietrich and Campbell caught the tail end of the field on lap 7 when a car spun ahead of them in turns 3 and 4, collecting Dietrich, “We got up to them cars and I went to go follow him in the top figuring we were going to start passing lapped traffic. I don’t what deal happened there but we barely made it through ourselves.”

Campbell inherited the lead and looked like he would be unchallenged for his first win of the season at Lincoln as the laps wound down. A late race caution changed that. Campbell had to hold off Devon Borden in a one lap shootout, “That was definitely exciting. I was kind of sitting there under yellow and looking at the board and trying to think where I want to run on the last lap. I may have done something a little different there if I could go back again but still it worked out the way we wanted it to. Yeah, that was fun.”

After a 2 hour 45 minute rain delay to start the night, the field lined up for the final 30-lap feature of the 2021 season.

Billy Dietrich took the lead when the green flag dropped with Matt Campbell getting by Austin Bishop to move up to second. Lucas Wolfe, Jordan Givler and Aaron Bollinger battled for fourth.

Campbell was using a good run off the bottom of turns 2 and 4 to close in on Dietrich.

The top two, Dietrich and Campbell, were battling for the lead when they caught the tail end of the field on lap 7. Just as lapped traffic was coming into play, Tim Glatfelter spun in turns 3 and 4. In an effort to avoid the spinning car Dietrich got into the back of a lapped car, causing his car to flip and catch on fire.

Campbell inherited the lead and led Bishop, Givler, Wolfe and Devon Borden on the restart.

Campbell pulled a wheelie on the restart but held the lead. Chad Trout go by both Borden and Wolfe coming out of turn 2. Borden got back by Trout at the line, but Trout held on to fifth.

Bishop and Givler battled for second with Givler using the bottom of the track and Bishop running the top. The two were wheel to wheel at the line on lap 10 with Bishop holding on to second.

Givler got by Bishop and took second on lap 11.

Bollinger was challenging Trout for fifth on the outside and got into the top five on lap 13.

Bollinger made quick work of reeling in Borden to challenge for fourth.

Campbell found himself in lapped traffic on lap 15. Anthony Macri was working on Bollinger to try and make his way into the top five.

Borden got by Bishop for third and Macri got under Bollinger for fifth with 10 laps to go.

Bollinger, Freddie Rahmer and Chase Dietz raced three wide for sixth behind Bishop. Dietz worked his way into the top five as he got by Bishop.

Borden was closing in on Campbell in lapped traffic when the yellow came out on lap 29 for Bishop, who had fallen off the pace and came to a stop on the back stretch.

Campbell, Borden, Macri, Dietz and Givler lined up for the one lap shootout.

Campbell had a good start and went to the top of turn 1. Borden went low and slid Campbell for the lead in turn 2. The two raced side by side down the back stretch and into turn 3. Campbell came out of turn 4 with the slight advantage and the two drag raced to the checkered flag.

Campbell got to the line .156 seconds ahead of Borden to claim his first win of the season at Lincoln. Macri finished third and Dietz was fourth. Givler completed the top five.

Steve Owings Goes Back to Back to Claim Title

Owings had to work his way to the front of the field from his ninth starting spot, “I was a little worried there starting 9th. We made a couple of laps and we were really good on the bottom which I’m normally not, the track’s got a lot of moisture and that played in our favor for sure. It takes a group effort to get where we are.”

Going into Saturday night’s race, there were three drivers vying for the track championship, Owings, Jeff Rohrbaugh and Cody Fletcher, “It would have been nice to see if Jeff ran all of the races, I didn’t know he didn’t run them all. If Cody didn’t have his mishap we probably wouldn’t be here. You got to be fast but you have to have some luck too.”

“We had a really good year,” Owings reflected on his year in victory lane, “We’re a couple short on what I thought we were going to win truthfully. We came out of the box a little slow.” Despite a slow start Owings and his team put together a solid year, “It turned on in the end.”

Dylan Orwig and Cody Fletcher shared the front row of the 20-lap feature.

Orwig, Rohrbaugh and Owings battled for third behind Scott and Rudisill.

The yellow flag waved on lap 5 when Zach Allman was sitting backwards in turn 4.

Scott led Rudisill, Orwig, Rohrbaugh and Owings to the cone for the single file restart. Fletcher got under Owings on the restart to move into fifth. Fletcher made quick work of Rohrbaugh and took fourth coming out of turn 2.

Despite front wing damage, Rudisill was hunting down Scott to challenge him for the lead.

Fletcher made his way into third on lap 10.

Rudisill got too high in turn 2 and rode the wall eventually coming to a stop bringing out the caution on lap 11.

The top five for the restart were Scott, Fletcher, Owings, Orwig and Rohrbaugh. Owings got under Fletcher for second as they drove into turn 3. Kody Hartlaub got by Rohrbaugh for fourth.

Owings took the lead coming out of turn 4 at the line on lap 15. Scott reclaimed the lead on the next lap.

One final lead change came when Owings reclaimed the lead coming out of turn 2 with two laps to go.

Owings crossed the line .716 seconds ahead of Scott. Fletcher finished third and Hartlaub was fourth. Rohrbaugh completed the top five.