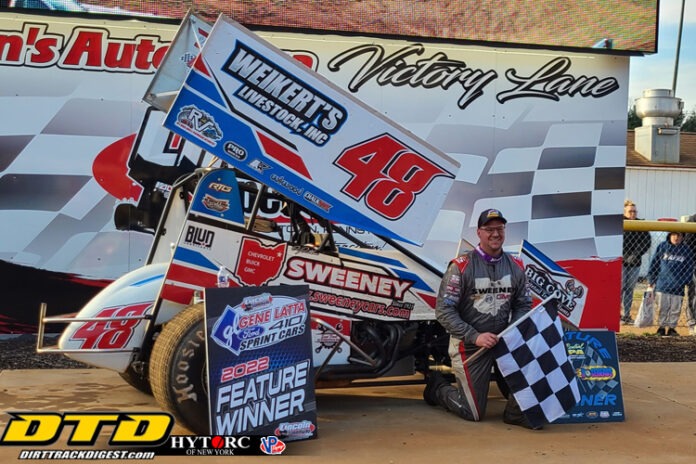 ABBOTTSTOWN, PA – Danny Dietrich became the first repeat winner of the 2022 season on Saturday after scoring his second win in a row. Dietrich lined up tenth for the start of the 30-lap feature, “They dropped the green and it was go time. I just ran where the moisture was.” Dietrich made his way to the front of the field in just five laps, “Its just so fun to drive this car.”

Once Dietrich took the lead there was no looking back, “Hopefully we made the feature exciting there at the beginning. After that I just felt like we were really good and we didn’t need any cautions.” Dietrich had to hold off the field on two restarts, both late in the race, but he did so in impressive fashion to score his 57th career win at the track.

Robbie Kendall and Niki Young were on the front row for the drop of the green flag. Kendall led the field into turn 1 with Tim Wagaman and Mark Smith getting by Young for second and third.

Danny Dietrich started the 30-lap feature 10th and was battling brother Billy Dietrich for fifth on lap 2. Danny took the spot and got by Smith and Young on lap 3 for third. Dietrich’s next conquest was Wagaman and he got by him for second coming out of turn 2 on lap 4. Dietrich made quick work of Kendall and took the lead on lap 5.

Billy and Wagaman were battling for third when the caution came out on lap 7 for Tyler Ross who was off the pace in turn 1.

Danny led Kendall, Wagaman, Billy and Young to the cone for the single file restart.

Billy got by Wagaman for third as they raced down the back stretch on the restart. Wagaman stayed close and was working the top line to try and take the spot back.

Two-time track champion, Freddie Rahmer, was on the move. Rahmer was working on Young to get into the top 5 from his ninth starting spot. Rahmer took the position on lap 11.

Out front Danny was running the high line around the 3/8-mile oval as he caught the tail end of the field. With most of the lapped cars running the bottom Danny made quick work of putting cars between him and Kendall.

Billy closed in on Kendall for second as they caught lapped traffic and took the spot on lap 18, putting the Dietrich brothers running first and second.

Wagaman caught Kendall for third and took the spot. That left Kendall to fend off Rahmer who was looking to take fourth.

Dylan Norris brought out the caution on lap 23 when he spun out in turn 4.

The top five for the restart were Danny, Billy, Wagaman, Kendall and Rahmer. Wagaman got under Billy in turns 1 and 2 for second on the restart. Kendall, Rahmer and Young ran three-wide for fourth with Young taking the spot.

After doing a 360 spin and initially continuing on, Kendall brought out the caution on lap 25 when he fell off the pace.

Danny, Wagaman, Billy, Young and Rahmer were the top five for the restart.

The leaders opted for the bottom in turns 1 and 2 on the restart. Freddie got by Young for fourth. Rahmer then reeled in Billy and took third coming out of turn 4 on lap 27.

Danny got to the checkered 1.482 seconds ahead of Wagaman. Rahmer crossed the line third and Billy finished fourth. Young completed the top five.

Rookie of the year contender, Cameron Smith, shared the front row with Brett Wanner for the start of the 20-lap feature on Saturday. Smith had the advantage going into turn 1 and pulled away from Wanner as they raced down the back stretch.

Steve Owings got by Wanner at the line for second on lap 1. Cody Fletcher who started tenth was up to fourth and had his eyes set on third.

Owings was closing in on Smith for the lead. Smith then went to work using the bottom line around the track to pull away from Owings.

Smith had lapped traffic to contend with at the half way point of the race but just as he caught the tail end of the field, the caution came out on lap 10 when Kyle Keen came to a stop on the back stretch.

Smith led Owings, Wanner, Fletcher and Matt Findley to the cone for the restart. Smith got through turns 1 and 2 using the bottom and maintained the lead. Owings tried a higher line, but couldn’t make the pass.

The yellow flag flew again on lap 11 when Justin Foster and Hayden Miller got together on the front stretch just past the flag stand.

The field saw another caution on the restart when Cody Fletcher, who was running fourth at the time, got into the wall in turn 1.

The top five for the restart were Smith, Owings, Wanner, Findley and Jeff Rohrbaugh. Owings had a slightly better restart but still could not close in to make the pass on Smith.

Rohrbaugh got by Findley for fourth and Kody Hartlaub followed to find himself inside the top five.

Owings worked the middle of turns 3 and 4 and made some ground on catching Smith. Smith had just half a car length lead at the line on lap 16. The following lap Smith was back in command and Owings fell back yet again.