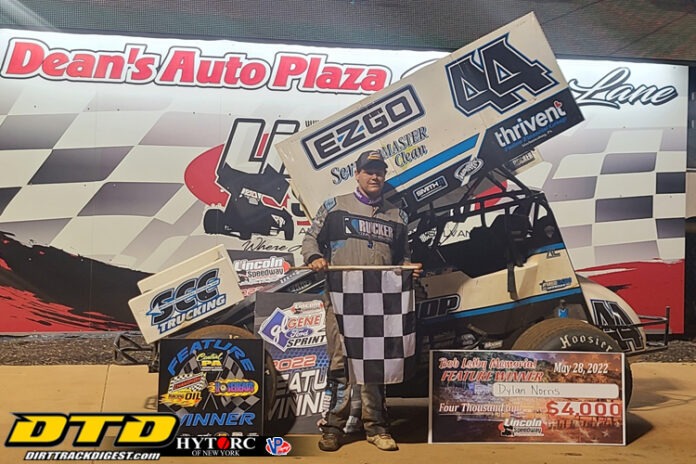 ABBOTTSTOWN, PA –  Brie Hershey and John Walp made up the front row for the start of the 30-lap feature. There was a lot of contact on the start throughout the field but everyone kept going. The caution did come out on lap 1 for Jordan Givler who fell off the pace and stopped in turn 4. Givler had visible front end damage from the melee at the start of the feature.

Hershey led Glenndon Forsythe, Walp, Riley Emig and Billy Dietrich to the cone for the restart. Hershey held the lead and Dylan Norris got by Dietrich for fifth before the caution came out on lap 2 for Mark Smith who stopped on the front stretch.

Norris went to the bottom on the restart and got by Emig for fourth. Dylan then went to work on Walp for third and took the spot coming out of turn 2 on lap 5.

Devon Borden got by Emig to work himself into the top five before the caution came out on lap 7. The yellow waved for Chase Dietz who spun around in turn 4.

The top five for the restart were Hershey, Forsythe, Norris, Walp and Borden.

Borden got by Walp on the outside for fourth on the restart and Norris was looking to the inside of Forsythe for second. Norris got by Forsythe leaving him for Borden to reel in.

Lapped traffic loomed ahead of the leaders allowing Norris to close in on Hershey. Norris took the lead by a nose at the line on lap 17. The caution came out on lap 18 when Jim Siegel was off the pace in turn 2.

Norris had a solid restart ahead of Hershey, Borden, Forsythe and Walp.

Borden looked to the topside for a way around Hershey but she held onto second.

Just as Borden got by Hershey for second, the caution came out on lap 23 for Hershey as she spun in turn 2.

The late race restart saw Norris lined up ahead of Borden, Tyler Ross. Forsythe and Dietrich. Ross looked to the inside of Borden for second but Borden held the spot.

Alan Krimes was on a late race charge getting by Dietrich for fifth with five to go and then also finding a way by Forsythe for fourth.

Norris scored his first Lincoln Speedway win by getting to the checkered flag .687 seconds ahead of Borden. Ross finished third and Krimes crossed the line fourth. Forsythe completed the top five.

The 410 heat race victories went to Tyler Ross, Riley Emig, Glenndon Forsythe, Brie Hershey and John Walp. In his first race of the 2022 Cory Haas was the hard charger, driving from 24th to a 10th place finish.

Steve Owings Goes Back to Back

After winning last week’s Summer Series feature, Steve Owings found himself back in victory lane on Saturday night for the second time in two weeks.

Cody Phillips and Justin Foster shared the front row for the drop of the green flag. Phillips shot to the lead with Hayden Miller getting by Foster at the start for second. Foster came back and was scored second on lap 1.

The caution came out on lap 2 when Foster got out of shape in turn 4 and stopped on the front stretch.

Hartlaub got by Herr for fourth on the restart with Owings looking to the outside of Miller taking second. Owings was closing in on Phillips when the caution flag flew again on lap 5 when Glenndon Forsythe was off the pace on the front stretch and David Holbrook came to a stop on the back stretch.

Owings used the outside to get by Phillips on the restart to take the lead.

Lap 6 saw another yellow flag. This time it was for Zach Euculano who stopped in turn 3.

The top five for the restart were Owings, Phillips, Hartlaub, Miller and Herr.

Hartlaub got by Phillips for second on the restart and Herr drove by Miller for fourth.

Chris Frank spun around in turn 2 bringing out the caution on lap 10.

There was no change in the top five when the yellow flag flew again on lap 16 when CJ Tracy spun out in turn 2. Lap 17 saw the caution come out for Brett Strickler when he stopped on the front stretch.

Cody Fletcher was looking to make his way into the top five on the final laps, but Miller kept him at bay.

Owings won his second feature in a row by 1.877 seconds over Hartlaub. Phillips crossed the line third and Herr finished fourth. Miller completed the top five.

Wes Alleman and Bob Stough raced wheel to wheel for the lead when the green flag dropped with Stough leading lap 1. Tyler Kaylor spun in turn 4 on the first lap bringing out the yellow flag.

Stough led Alleman, Stephen Wurtzer, Choya Young and Devon Friese to the cone for the restart. Travis Perry and Scott Spidle spun in turn 2 on the restart bringing out the caution again.

Alleman, Wurtzer and Young battled for second with Alleman and Wurtzer eventually pulling away from Young.

Young reeled Wurtzer back in to battle for third but Wurtzer held the spot. Wurtzer reeled Alleman back in and the two raced wheel to wheel for second.

Debris on the track brought out the caution flag on lap 7.

The top five for the restart were Stough, Alleman, Wurtzer, Young and Shaun Abney. Alleman looked to the inside of Stough on the restart with Wurtzer joining on the outside to make it a three-way battle for the lead.

Cody Atland and Preston Alleman stopped on the back stretch bringing out the yellow flag on lap 8.

Travis McClelland restarted fifth and challenged Young for fourth. McClelland would take the spot on lap 10.

Stough was pulling away from the field as battles for third and second were in full force behind him. Wurtzer got under Alleman for second in turn 2 before the caution came out on lap 13. The yellow was for Kaylor who spun out in turn 2.

McClelland was up next to Alleman racing for third with five laps to go. McClelland took the spot on lap 16.

Wurtzer was sticking with Stough and made a last lap effort at a pass for the lead.

Stough crossed the line .184 seconds ahead of Wurtzer for the ninth Lincoln victory of his career. McClelland finished third and Alleman was fourth. Young completed the top five.

Next Saturday, June 4, Lincoln Speedway is back in action with the Steve Smith Tribute Race presented by Conewago paying $19,000 to win for the 410 Sprints. The USAC East Coast Sprint Cars and ARDC Midgets are joining the 410 sprints. Racing starts at 7:30PM with pit gates opening at 4:00PM and grandstand gates opening at 5:30PM.