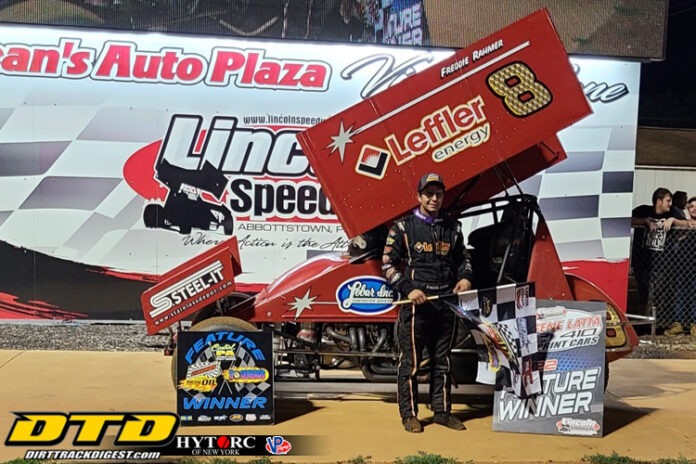 ABBOTTSTOWN, PA – Freddie Rahmer’s fifth win of the season came on Saturday night during DCS School of Driving Night. It was Rahmer’s second win in a row at the 3/8-mile oval. Rahmer lined up ninth for the start of the 30-lap feature and found his way to the front of the field on lap 14.

Cory Haas hunted down Rahmer in lapped traffic and made a late race charge for the lead. Rahmer knew he had to run high to black the challenge, “I was just trying to maintain. We had a bunch of yellows, I didn’t know how close they were. I knew once I got off the top I knew they’d be right there, I just tried to get back to it as soon as I could.”

When asked about his recent success in victory lane Rahmer shared, “We just got to take it one week at a time. It’s a wave it goes back and forth.”

Dalton Dietrich and Brie Hershey started on the front row for the drop of the green flag. Hershey led the field into turn 1 with Dietrich holding off both Michael Millard and Riley Emig as they challenged for second. Rahmer was up to fifth by lap 3 after getting by Robbie Kendall. Freddie then took fourth on lap 5 after getting by Tyler Esh coming out of turn 2. After the pass, Esh and Kendall made contact with Esh coming to a stop in the top of turn 2 bringing out the caution.

Hershey led Dietrich, Emig, Rahmer and Kendall to the cone for the restart. Brie got a good jump as Rahmer looked to the outside of Emig for third. Emig held off Rahmer at the line by inches on lap 6 but could not hold him off the following lap. Rahmer took third and went to work on Dietrich for second.

Kendall got by Emig for fourth. Haas took fifth from Emig on lap 9. Robbie tried a slider on Rahmer for third but could not make the pass. Rahmer pulled a slider on Dietrich for second, taking the spot on lap 13. Rahmer made quick work of Hershey making the pass for the lead on lap 14. Kendall was right behind him, but the caution came out on lap 14 for debris on the track. Despite making the pass for second, Kendall lined up for the restart behind Hershey since the lap had not been completed.

Rahmer got a good jump on the field with Haas looking to the outside of Kendall for second. Haas got under Kendall in turns 3 and 4 on lap 16 to move into third right before Kendall fell off the pace bringing out the caution.

The top five for the restart were Rahmer, Hershey, Haas, Matt Campbell and Dylan Norris. Once again Rahmer had a good start. Haas took second in turns 1 and 2 from Hershey and Campbell followed moving into third.

Chris Arnold did a 360 spin in turn 2 on lap 20 bringing out the caution. Rahmer paced the field ahead of Haas, Campbell, Chase Dietz and Norris for the restart. Haas stuck with Rahmer in turns 1 and 2. Dietz got by Campbell for third at the line.

Lapped traffic came into play with 4 laps to go. Haas got to the inside of Rahmer as they worked through lapped traffic but Rahmer held the lead. Freddie pulled a wheelie at the flagstand as the white flag waved allowing Haas to take one last stab at the win.

Rahmer crossed the line .528 seconds ahead of Haas. Dietz was third and Campbell finished fourth. Norris completed the top five.

John Sharpe and Tylar Rutherford shared the front row for the start of the 20-lap feature.

In only his second start in the division, Rutherford led the field through 1 and 2. The yellow flag waved before a lap was completed when Jeff Rohrbaugh and Steven Cox got together in turn 2.

The field lined up for a complete restart with Sharpe leading the field into turn 1 this time. Rutherford and Sharpe raced wheel to wheel down the back stretch for the lead. Rutherford got sideways in turn 3 and collected Doug Hammaker, bringing out the caution again before a lap was completed.

The third time was a charm with Travis Scott sharing the front row with Sharpe. Scott took the lead and Cameron Smith went to the outside of Sharpe to take second at the line.

Smith entered lapped traffic on lap 7. Jayden Wolf got by Owings on the back stretch to take third on lap 8. Smith was in heavy lapped traffic as Wolf closed in on Scott behind him. Wolf was searching for a way around Scott when the caution came out on lap 14 for Kane Eichenlaub who spun in turn 3.

The top five for the restart were Smith, Scott, Wolf, Owings and Fletcher. Wolf was off the pace on the restart and brought out the caution again on lap 15.

Smith had a good jump on the restart with Owings sticking with Scott to battle for second.

Smith won his second race of the season by 1.472 seconds over Scott. Owings crossed the line third and Fletcher was fourth. Chris Frank finished fifth.

Pole-sitter, Andy Ressler took the lead at the start but Austin Daniels drove by Ressler on the first lap to lead lap 1. Korey Inglin got by Ressler to move into second.

Richie Hitzler was up to third and dove under Inglin on lap 5 to take second. Hitzler then looked under Daniels for the lead in turns 1 and 2. The two raced wheel to wheel down the back stretch with Hitzler holding the advantage at the line to take the lead on lap 7.

After the pass for the lead, the yellow flag waved for Chris Smith who spun in turn 4.

The top five for the restart were Hitzler, Daniels, Inglin, Geoffrey Sutton and Ressler. Inglin was working on Daniels for second on lap 8 but Daniels held him off at the line. Inglin would take the spot on the next lap coming out of turn 4.

Lap 10 saw the yellow flag when Chris Frable and Keith Inglin spun in turns 1 and 2.

Hitzler led Inglin, Daniels, Sutton and Tyler Bartik for the restart. The caution came out on the restart for debris in turn 3.

Daniels, Sutton and Bartik raced three-wide for third with Daniels holding the spot. Bartik moved up to fourth and then took third on lap 14.

Scott Heisey brought out the caution on lap 14. Sutton was putting pressure on Daniels for fourth with two laps to go when the caution came out for Frable and Heisey.

Daniels and Sutton were wheel to wheel for fourth on lap 19 when Ingiln, who was running second, spun racing for the lead. Inglin spun again on the restart.

This Saturday, August 13, Lincoln Speedway is back in action with Motosports Night featuring 410 Sprints, Central PA Legends and Wingless Sportsman. Racing starts at 7:30PM with pit gates open at 5PM and grandstands open at 5:30PM.