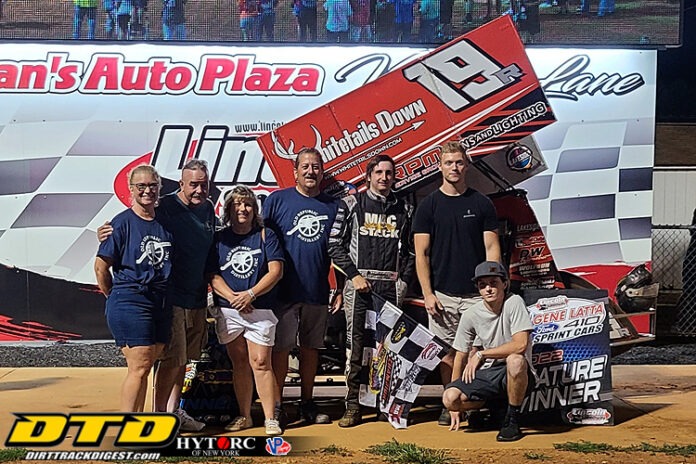 ABBOTTSTOWN, PA – Matt Campbell scored his second win of the season at Lincoln at Saturday night’s Barry Skelly Memorial. Campbell lined up eighth for the start of the 30-lap feature and moved into fifth on lap 8. Matt reeled in Brie Hershey to take the lead on lap 20, “I dodged a couple things there and we made it through. Kind of just picked away cars when I could I just tried to make the right moves. I felt I could have ran a little better race especially in lapped traffic.” Despite his sentiments in victory lane, Campbell worked his way through lapped traffic well, getting to the checkered flag nearly 2 seconds ahead of Moody who finished second.

Brie Hershey and Michael Millard started on the front row with Hershey leading the field into turn 1 with Millard in second.

Brett Strickler was working on Millard for second with Millard holding onto the spot.

Glenndon Forsythe hit the wall in turn 4 bringing out the caution on lap 3.

Hershey led Millard, Strickler, Jordan Givler and Kyle Moody for the restart. Strickler got by Millard coming out of turn 2 to take second.

Moody drove by Givler for fourth and two laps later got by Millard for third.

Matt Campbell was up from his eighth starting spot to challenge Givler for fifth. The two raced wheel to wheel for the spot with Campbell taking it on lap 8.

Campbell nearly took fourth on lap 9 at the line but got the spot on lap 10.

The top five for the restart were Hershey, Strickler, Moody, Campbell and Millard. Hershey paced the field slowly as they came to the restart line. Moody got by Strickler for second.

Zane Rudisill brought out the yellow on lap 12 when he stopped on the front stretch.

This time the top five for the restart were Hershey, Moody, Strickler, Campbell and Givler.

Hershey paced the field a bit quicker this time. Moody made an attempt at the lead but could not make the pass. Campbell was up to third on lap 13 and was closing in on

Campbell nearly got by Moody for second with a move in turn 4 on lap 16 but would have to wait two laps until he was able to make the pass.

Moody followed on the next lap moving into second. Strickler was looking for a way around Hershey for third and made the pass with five laps to go. Dylan Norris followed moving into fourth from his 13th starting spot.

Campbell got to the checkered flag 1.864 seconds ahead of Moody. Strickler finished third in his third appearance in the division after moving up from the 358 sprints. Norris crossed the line fourth. Freddie Rahmer finished fifth after starting 21st, earning him the hard charger honors.

Cameron Smith, still in his rookie season, won his third feature of the year at Lincoln at Saturday night’s Barry Skelly Memorial. The 25-lap feature was a part of the MacMor Construction Summer Series and paid $2,000 to win.

Matt Findley started on the pole alongside Hank Donovan Jr. Findley led the field into turn 1 with Smith and Donovan battling for second. Smith took the spot leaving Donovan to fend off David Holbrook.

Smith made quick work of reeling in Findley to challenge for the lead. Smith took the top spot on lap 4 and started to pull away from the field.

Travis Leh brought out the caution on lap 7 when he spun in turn 2.

The top five for the restart were Smith, Findley, Donovan, Holbrook and Steve Owings.

Smith got a good jump on the field and Holbrook looked to the inside of Donovan and took third. Owings went to Donovan’s outside to take fourth. Owings and Holbrook battled wheel to wheel at the line on lap 10 with Owings taking third on lap 11.

Wyatt Hinkle had just worked his way into the top five when he brought out the caution on lap 13 after hitting the wall in turn 4.

Smith led Findley, Owings, Holbrook and Jeff Rohrbaugh to the cone for the single-file restart. The yellow flag waved again on lap 14 when Kyle Keen stopped on the front stretch.

Cody Fletcher drove under Jeff Rohrbaugh for fifth and took the spot on lap 15. With five laps to go Owings was reeling in Findley.

Smith caught the tail end of the field with 4 laps to go. Donovan brought out a late race caution on lap 23 when he stopped in the bottom of turn 2.

Smith had another solid restart but the caution would come out on more time on lap 24 for Jordan Strickler, Nash Ely and Chad Criswell in turn 1. Hayden Miller also stopped in turn 2.

The field lined up for a green then checkered finish. Smith got to the checkered flag .881 second ahead of Owings, who had edged by Findley for the spot on the final lap. Findley crossed the line third and Holbrook was fourth. Fletcher completed the top five.

The top five were all battling for position with Shawn Jackson up to second. Jackson passed Mausteller for the lead coming out of turn 2 and Michael Markey followed taking second.

Jackson got sideways in turn 4 but held onto the lead. The yellow flag waved on lap 6 for Brian Carber and Scott Lawrence in turns 3 and 4.

Jackson led Markey, Mausteller, Booth and Zach Curtis for the restart. Booth made a pass before the cone to get to third but was penalized two spots at the end of the feature.

Jackson won the feature by 2.286 seconds over Markey. Mausteller was scored third and Curtis was fourth. With his two spot penalty, Booth was officially scored fifth.

This Saturday, August 27, Lincoln Speedway is back in action with the All-Star Circuit of Champions featuring the $7,300 to win Kramer Klash for the 410 Sprint Cars plus EMMR Exhibition. Racing starts at 7:30PM with pit gates open at 5PM and grandstands open at 5:30PM.