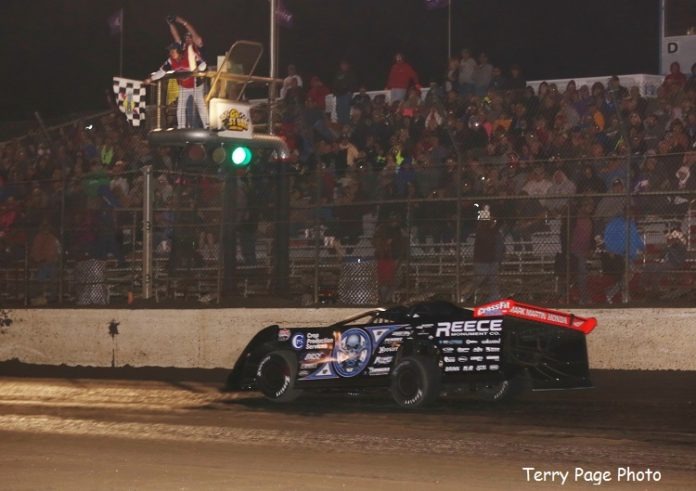 Bloomquist took the lead on lap 19 from Don O’Neal and then held off Richards and Jonathan Davenport, who had come from ninth to challenge Bloomquist late in the race. The previous night’s winner Tim McCreadie charged from 17th to finish fourth in the Sweeteners Plus, Longhorn Chassis – while O’Neal crossed the finish line fifth in the Peak Antifreeze and Coolant, Club 29 Race Car for Clint Bowyer Racing.

O’Neal led the first lap of the race before Doug Drown charged to the lead on lap two. O’Neal then regained the top spot and held off Bloomquist until lap 16, when Bloomquist got around him just before the caution flag waved.

Bloomquist attributed his win to a multitude of people, including Randy Sweet who helped design the Sweet-Bloomquist Chassis that he drove to the victory. “We have a bunch of help this weekend that Randy brought down for us. It takes a more people to get this done than it used to.”

“If the cautions didn’t come out we may have gotten him [Bloomquist]. Once the cautions came out there at the end I just had to protect the bottom. I ventured up the track in three and four that one lap and I figured I had better get back down. We just wanted to salvage second for a good night. We got behind in the heat race, we had a shock issue that messed us up some and I was riding wheelies out there,” said the 28-year-old Richards.

Davenport’s new Barry Wright Icon Chassis was impressive in its second run at East Bay Raceway Park this week. “When we went to the top, the car was really good. Dor the first part of the race we were just trying to save our stuff – I should have stayed up top for another lap. I thought my right rear was getting too hot. When I dropped down low that’s when he [Richards] got by me.” 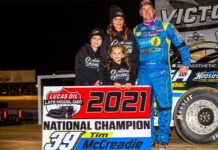 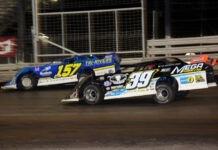