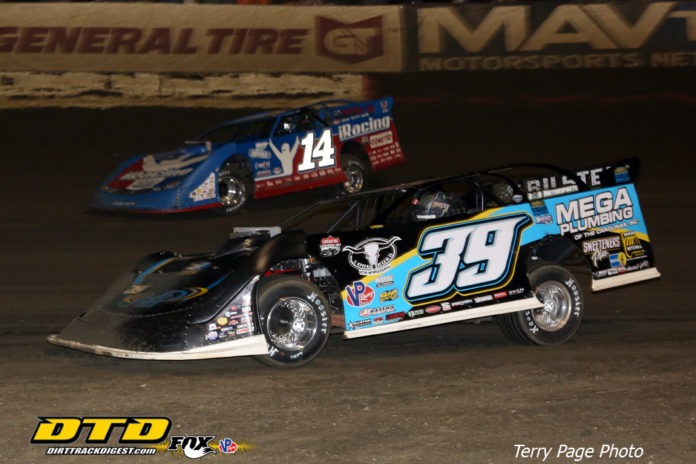 BATAVIA, OH – The Lucas Oil Reopening Tour for the Lucas Oil Late Model Dirt Series kicks off this week with the Optima Batteries Golden Isles Nationals – Presented by Bilstein. Three single day shows – paying $7,000 each to-win will be contested at Golden Isles Speedway in Waynesville, GA on Tuesday, Wednesday, and Thursday May 19th, 20th, and 21st. All three events will be full series points races, including Time Trials, Heat Races, B-Mains and a 40-Lap A-Main Feature Event each night. Due to the COVID-19 pandemic restrictions, these events will be fan-less.

Following the three nights of racing in Georgia, the Lucas Oil Reopening Tour will travel to East Bay Raceway Park in Tampa, FL for the GEICO East Bay Nationals – Presented by Brandon Ford on Monday, Tuesday, and Wednesday May 25th through the 27th. Three single day shows – each paying $7,000 to-win will be contested at East Bay Raceway Park, including Time Trials, Heat Races, B-Mains, and a 40-Lap A-Main Feature Event. All three events will be full-point paying races for the Lucas Oil Late Model Dirt Series. Due to the COVID-19 pandemic restrictions, these events will be fan-less.

Thanks to Lucas Oil Products, Lucas Oil Production Studios, LucasOilRacing.TV, and the Lucas Oil Late Model Dirt Series, fans will still have the opportunity to watch all three events LIVE from Golden Isles Speedway and East Bay Raceway Park from wherever they are located around the world. The adrenaline-pumping Lucas Oil Late Model Dirt Series will be broadcast LIVE on LucasOilRacing.TV for monthly and yearly subscribers and LIVE on the Series Facebook page (www.facebook.com/lucasdirt/) for FREE at 7:30PM ET/6:30PM CT each night. All six nights of racing on the Lucas Oil Reopening Tour will be taped for broadcast on the MAVTV Motorsports Network – airing later this year.

“We want to thank all of our partners who are making it possible to reopen the Lucas Oil Late Model Dirt Series during the COVID-19 Pandemic. We especially would like to thank Optima Batteries, GEICO, Brandon Ford, and Bilstein for their sponsorship of the TV broadcasts, making it possible to show all the action live to the fans – from all six events of the Lucas Oil Reopening Tour. Lucas Oil’s love for the sport, race teams, fans, and all our partners, couldn’t be more evident at this moment. We encourage everyone to tune in to the LIVE broadcasts and get ready for some thrilling racing action,” stated Wayne Castleberry, Corporate Motorsports Sales and Marketing for Lucas Oil Motorsports.

The Lucas Oil Reopening Tour will also have additional bonus money up for grabs, courtesy of Riggs Drilling Solutions and Sunoco Race Fuels. The driver that earns the most points in these six events will receive a $5,000 cash award after the final event at East Bay Raceway Park, compliments of Riggs Drilling Solutions. The Sunoco Road to East Bay program will award racers with perfect attendance in 2020 through the May 27th event at East Bay Raceway Park, an additional $1,500 cash bonus, compliments of Sunoco Race Fuels.

Any companies or individuals that would like to contribute to this bonus/point fund program for the Lucas Oil Reopening Tour can contact Wayne Castleberry directly at his email at: wcastleberry@lucasoil.com or by phone at: 951-741-8679. The more contributions we receive, the more spots the point fund will pay back to the drivers that compete in the Lucas Oil Reopening Tour.