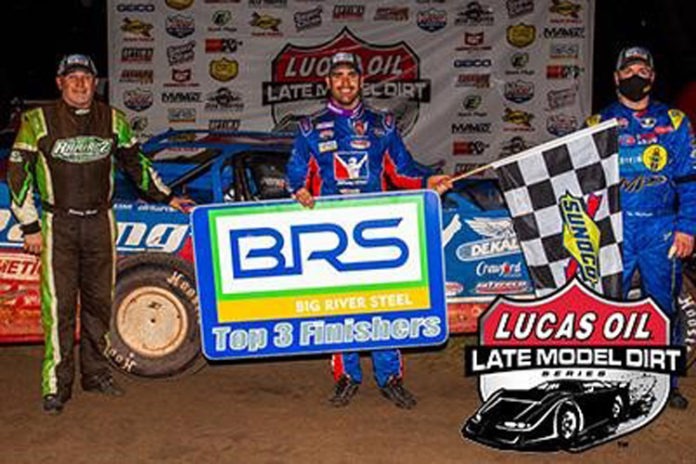 WAYNESVILLE, GA – Josh Richards picked up his first Lucas Oil Late Model Dirt Series win of 2020 on Thursday Night at Golden Isles Speedway. He led most of the race, until Mason Zeigler took over the top spot, but ultimately luck was on Richards’ side when race leader Mason Zeigler got into the turn two wall with two laps remaining leaving the second-place running Richards a clear path to victory lane.

Zeigler and Richards battled for the lead for nearly 28 laps, but Zeigler slipped in turn two on lap 38. He got into the wall and ended his night after he led since lap 29. Richards then pulled away from Tim McCreadie in the final circuits to pick up his 29th career Lucas Oil Late Model Dirt Series victory and his seventh at Golden Isles.

With McCreadie’s second place finish, he takes over the Lucas Oil Late Model Dirt Series point lead.  Jimmy Owens completed the Big River Steel podium with his third place finish. Mark Whitener grabbed the fourth spot with Devin Moran coming from the tail to finish in fifth. Moran missed the ten-minute call and had to start 24th on the grid.

Brandon Overton started from the pole after winning the PFC Brakes Pole Award and he led the first seven laps of the race until ignition problems caused him to bring out the first caution of the race. His night ended when his car slowed coming off turn number four as Richards went by him to lead lap eight.

As Overton exited the race under the caution, the restart went one-two Richards on the point and McCreadie in second, followed by home state driver Steven Roberts. The car on the move after the restart was Mason Zeigler. He shot to the second spot around McCreadie on lap 11 and then set his sights on Richards.

Richards and Zeigler duked it out in a two-car battle for the lead with McCreadie and Owens hot on their heels. Zeigler stalked Richards until he slid under him in turn four to take over the lead on lap 29.  Richards then stayed close to Zeigler as the two blazed a furious pace around the speedy 3/8th mile oval. With just two laps to go Zeigler got into turn one too hot and banged the turn two wall putting him out of a shot at his second win of the season.

With the win, Richards became the eighth different winner in eleven Lucas Oil Late Model Dirt Series events this season. “He [Zeigler] has come a long way. I don’t know if I could have gotten back around him. I was kind of a sitting duck; I couldn’t roll the corners good as I wanted to. I was kind of using the right rear a little bit. I was trying to find a good rhythm and once he got by me I was trying to turn the wick back up.  He made a mistake tonight and Mason slipped up a little bit and I was able to hold off McCreadie at the end.”