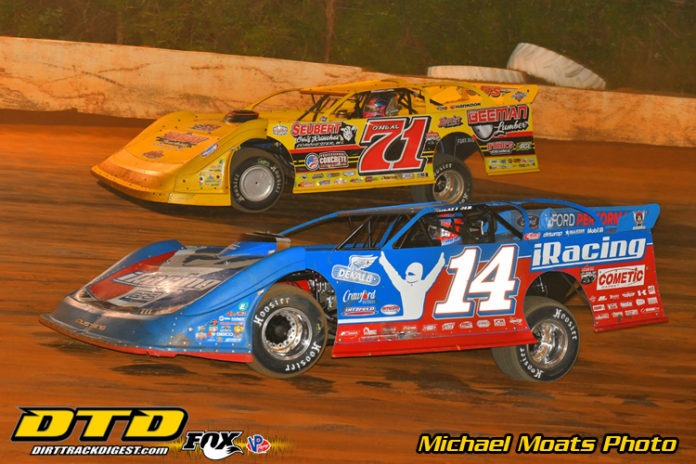 FARLEY, IA – Josh Richards made a daring three-wide pass for the lead on lap 17 and went on to win the Lucas Oil Late Model Dirt Series Truck Country 50 on Monday Night at 300 Raceway. Richards, Jimmy Owens, and Kyle Bronson went 3-wide down the main straightaway as Richards split both Owens and Bronson to take the lead heading into turn one on lap 16. From there Richards maintained a steady pace to the checkers as he bested Owens by .872 seconds to become the sixth different winner in six appearances by the LOLMDS.
Tim McCreadie charged from the back after pitting for a flat tire to finish in third place. Kyle Bronson led the first part of the race but finished in fourth followed by Tyler Erb, who rounded out the top five finishers.
Richards was thankful his right rear tire held up as flat tires derailed some of his top competition. “Man, I was hoping the tires would hold up tonight. I can’t thank everyone enough with this race car: Brad, Cody, and Big Dog; they do a phenomenal job. Thanks to my dad and Steve Baker at Rocket Chassis. We have had a lot of speed, and we just tweaked some things. We were a lot better tonight. I knew last year the track dried up pretty quick. They tilled it up quite a bit tonight, so we kind of left the car alone. The car was snug tonight. The last couple of laps the right front wouldn’t steer at all. I was fortunate enough to have a scoreboard in turn three to help with how many laps I had left.”
Owens notched yet another top five finish this year. “Josh drove an awesome race. He made a heck of a move to get the lead. It was great to come out with another podium finish. They did a great job on prepping the track before the feature. It was good racing all-night long.”
McCreadie passed several cars in the closing laps to round out the podium. “This is two years in a row we have had flats here. Hats off to everybody in the pit to get both back tires changed. When I got to third, I thought I was getting another flat. We had a nice rebound and are looking forward to the next race.
The winner’s Clint Bowyer Racing Rocket Chassis is powered by a Cornett Racing Engine and sponsored by iRacing, Big River Steel, DEKALB Seed, Crawford Outdoor, FORD Performance, Cometic Gasket, and Integra Shocks.
Completing the top ten were Jonathan Davenport, Tanner English, Shane Clanton, Tyler Bruening, and Devin Moran.
Lucas Oil Late Model Dirt Series
Race Summary
Truck Country 50
Monday, July 13th, 2020
300 Raceway – Farley, IA