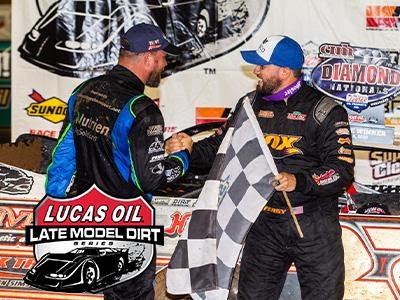 WHEATLAND, MO – Chris Ferguson’s first weekend racing at Lucas Oil Speedway will be memorable as the North Carolina native captured an exciting 14th Annual CMH Diamond Nationals on Sunday Night at Lucas Oil Speedway. Ferguson edged 3-time and reigning Lucas Oil Late Model Dirt Series National Champion Jonathan Davenport by just .086 seconds at the finish line to record his second career LOLMDS win. Shane Clanton finished in third followed by Rick Eckert and Shanon Buckingham.
The race which was delayed for nearly two hours because of light rain. Ferguson, who started from the pole led the first eight laps until Hall-of-Famer Billy Moyer Sr. grabbed the top spot for one lap. That would not last long as Ferguson came right back to regain the lead a lap later. Ferguson fought off some strong challenges from the field and he had to dive under Davenport to maintain the lead that he held all the way to the checkered flag to become the series’ 15th different winner this season.
Ferguson; in Lucas Oil Victory Lane for the first time outside of his home state; was elated with his win. “Man, I can’t believe it. I am telling you God is great. I have so many people to thank. You know if it wasn’t for my sponsors, I wouldn’t even be here right now. This is something I’ve dreamed of for a long time, to come out here and win at a racetrack like this and do it like this. It’s just awesome. When Jonathan got by me, he slid way up in four and I was able to turn under him and beat him into turn one. We rubbed a little going down the backstretch, but it was just good hard racing. I wasn’t going to give up and fortunately we were able to beat him to the line.”
Davenport was pleased with a podium finish for the night, “I was just biding my time early on and letting things sort themselves out. Once I got a handle on things, I found a line I liked. I slid under Ferguson in four, but I went too far up the track and got in the berm and I couldn’t get off of it fast enough to keep Chris behind me. What happened to Jimmy [Owens] was tough break for him, he had a good car.  Congrats to Chris and his guys on the win.”
Clanton was in the thick of things in the race for the lead over the last 20 laps of the race as he took third in his first visit to the track as well. “I like this place; it was slick last night and hammer down tonight. We were right in there tonight for the lead. I think I showed Jonathan the way around when I got to Ferguson with about 20 laps to go. He [Davenport] got by me and used my line to catch Ferguson. It was my kind of track tonight and the track crew did a good job getting the track ready after the rain. Thanks to Forrest Lucas for giving us such a great facility to be able to race at.”
The winner’s Bryan Conard Racing/Team Zero Bloomquist Race Car is powered by a Clements Racing Engine and sponsored by Diff-Tran Machining Inc., Live Oak Aesthetic and Family Dentistry, K&K Trucking, The Racing Warehouse, Carver and Sons Roofing, Butlerbuilt, and Beaux Tie Limousine Service.
Completing the top ten were Kyle Bronson, Kyle Strickler, Tyler Bruening, Josh Richards, and Tim McCreadie.
Lucas Oil Late Model Dirt Series
Race Summary
CMH Diamond Nationals – Presented by Super Clean
Sunday, July 19th, 2020
Lucas Oil Speedway – Wheatland, MO