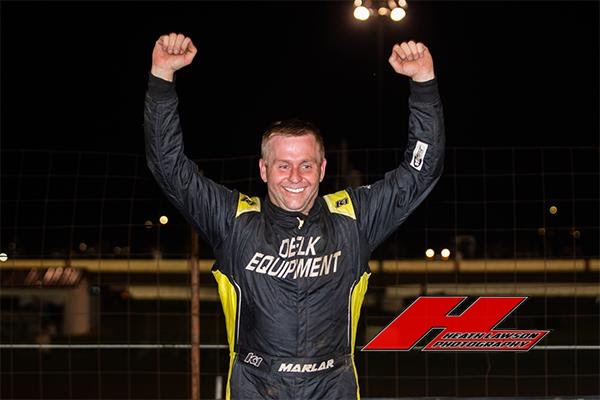 FARLEY, IA – Mike Marlar remained consistently near the front throughout the event, and with three laps to go, took over the top spot on his way to the win at 300 Raceway. Kyle Bronson led the main event until he suffered a flat right rear tire under a lap 47 caution. Marlar led the rest of the way for his first Lucas Oil Late Model Dirt Series win of 2021 in the Truck Country 50.

Bronson controlled the race from the onset and held off brief challenges from Josh Richards and Marlar throughout the race. He looked to be on his way to his first series win of the year, but during a caution flag with 47 laps scored Bronson had to head to the hot pit for a tire change.

“That was a hard-earned win. I don’t know how that worked out, but we got it. I hate what happened to Kyle with that flat tire near the end. Kyle called me coming up the road last night and those guys have been working really hard to get better. He was hauling the mail tonight for sure. It was good to see him run so well like he did. Sometimes you run out of laps. I have had a flat with just a couple of laps to go before,” said the 43-year-old racer in his full season with the series.

“We needed this win tonight,” Marlar added. “We have been struggling this year. One night we run second and the next night we run twenty fifth. To have a good finish was nice tonight. My team and car owner deserve this, they put so much into this. We have a lot of great friends in Iowa and Missouri so its good to run in front of them.”


Erb fought off an exciting battle with Pierce to pick up the runner-up position. “We survived with a lot of patience tonight. I was just trying to keep the nose on it. We have been running really good here the last few weeks. It was exciting for me out there for sure. Bobby ran a really good race. I can’t thank him enough for racing me clean.”

The winner’s Ronnie Delk-owned Capital Race Car is powered by a Cornett Racing Engine and is sponsored by Tri-Rivers Enterprise, Penske Shocks, Rockets Convenience Plus, Delk Equipment, and Can Am Auto Sales.