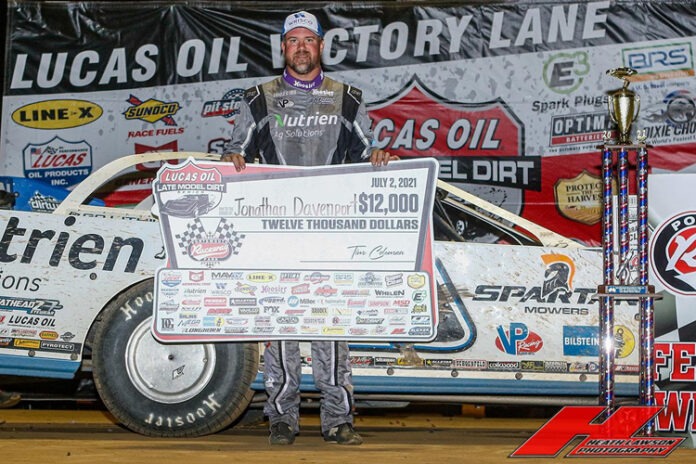 With 36 laps in the books, Kyle Bronson moved past Tim McCreadie to hold on to the second position for the remainder of the race. McCreadie led the first eight laps, but came home in third followed by a first-time visitor to Portsmouth Raceway Park, Spencer Hughes. Tyler Erb rounded out the top five.

The current series Championship point leader, McCreadie, was looking to complete a perfect night with his first-ever win at Portsmouth. McCreadie led until Davenport, who started fourth, charged around him on the ninth lap to take over the lead. Davenport won over Bronson by 2.5 seconds to record his third Lucas Oil Late Model Dirt Series win at Portsmouth Raceway Park.

“This old car has been really good this year, we have beat it to death. With these racetracks coming up on the schedule they each have a character of their own so that is why we saved the new one we had been running. This car ran as good as the new one.”

“This place wasn’t too bad from my view. I had my doubts when we first got here. But from where I was, it was perfect. I got up beside McCreadie there and I knew I had to get by him. He is such a smart racer that he would move down in that line, and it was going to be hard to get by him. I hope I left him enough room over there when I got by him.”

Bronson kept himself in the hunt for his first win of the season. “We were off a little tonight but to run second, we’ll take it. Our car has been really good the last couple of months. We are finally getting a good balance on it. Davenport and them Longhorn guys have been really good the last few months. We are close, we just have to do a little more and hopefully we can be outrunning them here soon.”

McCreadie will maintain the series point lead heading to Muskingum County Speedway on Saturday Night. “It’s consistent, it’s just not where we want to be. We just will try to work harder. Hats off to JD and Kyle and everybody that was out there. Hats off to the track.”