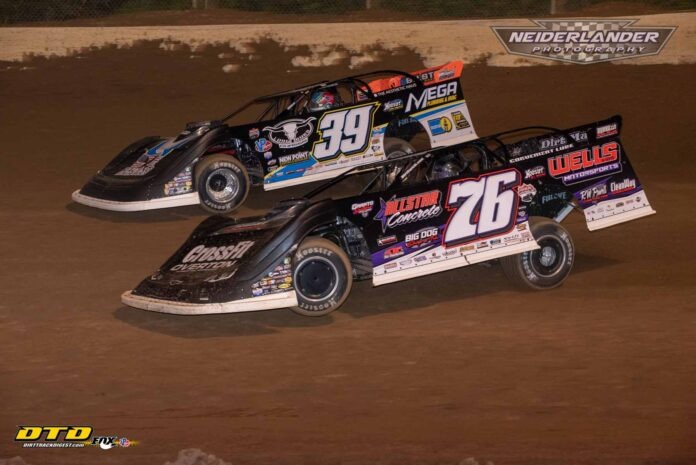 McCreadie, the current championship point leader and Jonathan Davenport battled side-by-side for several laps towards the end of the race, but McCreadie edged out Davenport at the finish for second. Davenport finished just a tenth of a second behind the defending race winner.

Jimmy Owens charged from 12th to cross the line in fourth. Josh Rice, the 2021 Ralph Latham Memorial winner, came home in fifth after running as high as second in the race.

Looking to become just the third driver in event history to win the race three times, McCreadie got off to a good start by grabbing the lead at the outset from the pole position. Overton started third but quickly moved into second on the opening lap and stayed glued to the back of McCreadie’s bumper for the first 21 laps of the race.

Overton made the move for the top spot over McCreadie on the 22nd circuit. McCreadie lost ground to Overton as Rice was making his way into the top three, and into second on lap 61. Rice would try to chase Overton down, as he held the second position until lap 95.


With five laps to go Rice started to fade from contention as Davenport moved around him lap 96. Davenport brought along McCreadie as their battle went down to the final lap. McCreadie edged out Davenport for the runner-up spot at the finish.

In Lucas Oil Victory Lane for the second time this weekend at Florence Speedway and for the 11th time in his career, Overton added another crown jewel victory to his sparkling 2021 season. “The car was awesome. I think anybody could have drove it tonight, we’ve been working really hard on it, and it definitely paid off. Man, this is cool with al of these people here and you all pumping us up before the race this is awesome. I love coming here, I appreciate every one of you.”

Overton’s 21st overall win of the year was special for his car owner David Wells, a native of Hazard, Kentucky. “This is for my car owners, David and Eric Wells, I know this place means a lot to them. I have been a nervous wreck all day because I really wanted this win one really bad, I know it’s special to them. It makes me happy to see them happy. It is a dream to drive this thing. I just don’t want to stop.”

With his second-place finish, McCreadie extended his championship point lead over Davenport. “I did the best I could. Brandon wasn’t waiting around tonight, he figured he needed to get control of the race. That Rice kid is such a battler. I maintained but I wasn’t good enough. Really, I just got lucky at the end. To be sandwiched between these two guys tonight, they are the two winningest and hottest cars this year.”

Davenport will maintain second in the championship points chase as the series heads to Batesville, Arkansas next weekend. “Me and Timmy had a pretty good race going there. It would have been awesome if it would have been for the lead. Congratulations to Brandon, he’s been rolling pretty good this year. We just tightened up the car a little too much. The guys gave me another good race car, we just missed a little bit.”