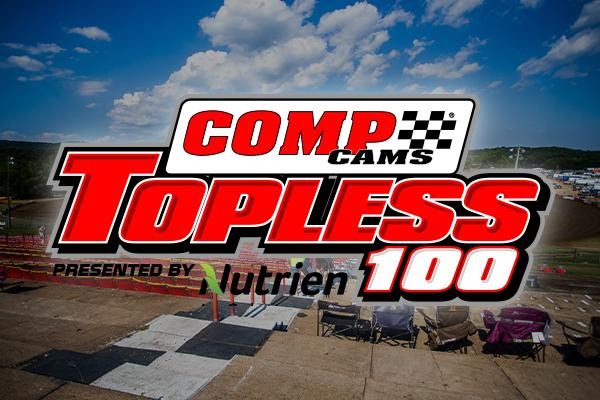 BATAVIA, OH – The Lucas Oil Late Model Dirt Series is up next with the COMP Cams Topless 100 – Presented by Nutrien Ag Solutions. The Crown Jewel event takes place this weekend with a $40,000 top prize on the line Saturday in Batesville, Arkansas.

One of the most highly anticipated events of the season, the 29th Annual COMP Cams Topless 100 – Presented by Nutrien Ag Solutions is slated for Thursday – Saturday, August 19th – 21st, at Batesville Motor Speedway. The crown jewel event is co-sanctioned by the Lucas Oil Late Model Dirt Series and the COMP Cams Super Dirt Series.

The Topless 100 prelim nights will feature a complete program of Time Trials, Heat Races, B-Mains and a 30 lap, $5,000-to-win main event on Thursday and Friday nights. Drivers will earn points in each of the two preliminary nights that combined, will determine the lineups for Saturday night’s finale. The top 16 in combined points will be locked into the A-Main, while everyone else will go to a B-Main. Modifieds will also compete in a full program on Thursday and Friday nights. Both days, the pit gate will open at 3:00 PM CT, main gate at 4:00 PM CT, with a driver’s meeting slated for 7:00 PM CT and hot laps to begin 30 minutes later.

Saturday’s festivities will kick off with hot laps at 8:00 PM CT, followed by consolation events for the Lucas Oil Late Model Dirt Series. The 100-lap, $40,000-to-win Topless 100 will cap off the weekend action. The Modifieds will once again compete in a full program on Saturday night. The pit gate will open at 3:00 PM CT, main gate at 4:00 PM CT. There will be a driver’s meeting at 7:30 PM CT.

In 2020, Jimmy Owens held off a furious charge from Hall-of-Famer Billy Moyer on the final lap for the $40,000 victory. Moyer charged from 18th to briefly edge in front of Owens as the two exited turn number two on the final lap, but Moyer drifted out too high and hit the outside retaining wall. Owens pulled away for his third win in the event’s history. Moyer fell from second to fourth at the finish as both Earl Pearson Jr. and Tim McCreadie slipped by him.

This event is unique in the fact that the dirt late models are without a roof. The topless aspect gives spectators an up-close look, as drivers wrestle their 800+ horsepower machines around the lightning-fast, 3/8-mile oval. For more information on the COMP Cams Topless 100 – Presented by Nutrien Ag Solutions, visit: www.batesvillemotorspeedway.com or call the Speedway Office at (870) 251-0011.


About COMP Cams:
For more than 35 years, the COMP Cams mission has never changed: to produce the highest-performing products possible, provide customers with superior service, and to lead the industry in technological development. While the COMP Performance Group has grown to multiple companies and hundreds of employees, we still retain the competitive spirit and desire to be the very best that has positioned COMP Cams as the absolute leader in valve train components. To learn more about COMP Cams, visit: www.compcams.com.

About Nutrien Ag Solutions:
As the largest producer of potash by capacity and one of the world’s largest producers of nitrogen and phosphate, Nutrien provides the three key nutrients growers need to produce healthier, more abundant crops. Their Ag-Retail operations supply key products and services directly to growers – including crop nutrients, crop protection, and seed, as well as agronomic and application services – to help meet the world’s ever growing-demand for food and fiber. To learn more about Nutrien Ag Solutions, visit: www.nutrien.com or www.nutrienagsolutions.com.
About Lucas Oil Late Model Dirt Series
Founded in 2005, the Lucas Oil Late Model Dirt Series showcases the talents of the top dirt late model drivers from across the country. In 2021, the Lucas Oil Late Model Dirt Series will sanction 59 events across 18 states, including some of the biggest marquee events in the industry, providing dirt slinging, sideways, door-to-door racing action lap after lap.