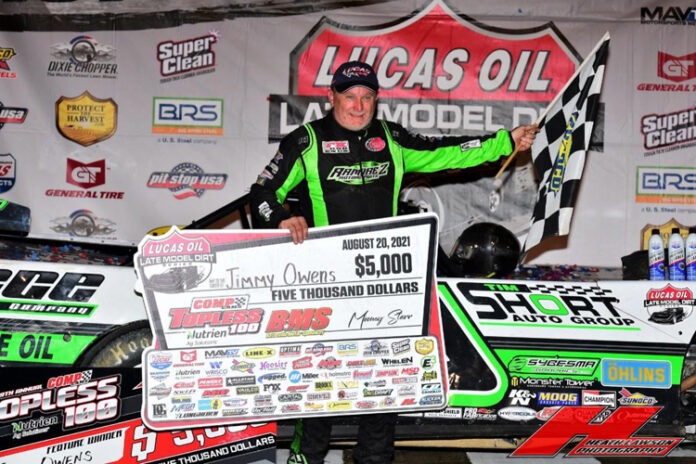 Owens took the lead at the drop of the green flag and led the entire distance for his 76th career series victory. The event was co-sanctioned with the COMP Cams Super Dirt Series – presented by Lucas Oil.

In a race slowed by only one caution flag, the 49-year-old Tennessee native raced through traffic at a consistent rate to keep McCreadie at bay. McCreadie and Overton closed slightly on Owens in traffic, but neither could get close enough to challenge for the top spot.

Overton, the Sunoco North-South 100 winner a week ago at Florence Speedway, ran as high as second before crossing the finish line in fourth with left front suspension damage. Nick Hoffman started fourth but faded several positions in the early part of the race before recovering to claim the final podium spot.

Owens has climbed to sixth in the championship points standings, after leaving Florida Speedweeks in 15th, looks forward to defending his COMP Cams Topless 100 title tomorrow night. “This was 30 laps tonight, there wasn’t any sense in taking it easy until the end of the race. The car was good. It’s been good all night long. I want to thank the guys for busting their tails. It’s been a long road to get back up here. The car was flawless tonight, maybe we can carry it into tomorrow.”

“This definitely is a boost of morale for the guys,” Owens added. “It makes it a lot better when you go from one race to the next. It was Becky Ramirez’s birthday a few days ago. This one’s for her.”

McCreadie will enter tomorrow night’s $40,000-to-win event with a good starting spot as well after coming in second Friday Night. “The car wasn’t the greatest at the beginning, but that’s what you’re hoping for at the end to get a little better as the race goes on. We will see if we can make it better for tomorrow night. We had a little luck on our side to run second tonight. We have run second this year in a lot of big races. This is a tough series to be in. We have been the most consistent here lately.”

Hoffman’s comeback during the race netted him a third-place finish. “The race car has been really good. Talking to Scott about this weekend I just felt like this place would fit my driving style. We drive a lot alike. He has won a lot of races here. At the beginning I kind of faded a little bit. A lot of it was me just not being aggressive enough at the beginning and then I got rolling at the end. We were really good.”