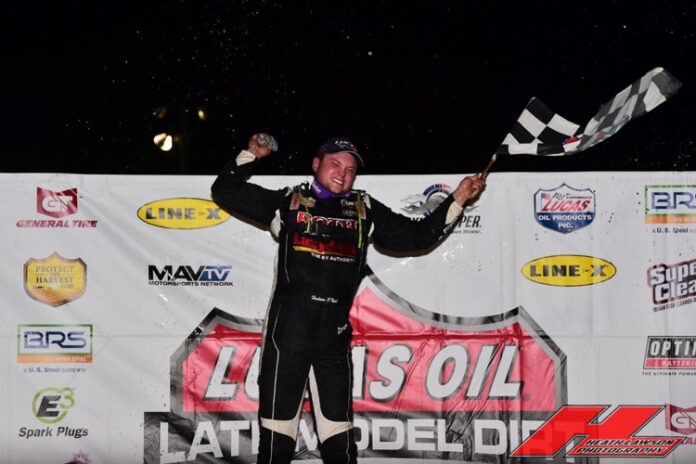 LOCUST GROVE, AR – In a close and dramatic finish Hudson O’Neal barely edged out Jonathan Davenport at the finish line to win the 29th Annual COMP Cams Topless 100 Presented by Nutrien Ag Solutions. The win Saturday night at Batesville Motor Speedway was O’Neal’s fourth this season with the Lucas Oil Late Model Dirt Series. The event was co-sanctioned with the COMP Cams Super Dirt Series Presented by Lucas Oil.
For the 20-year-old Indiana native it would be O’Neal’s second crown jewel victory of 2021 to go along with his Show-Me 100 win at Lucas Oil Speedway in May.
O’Neal started sixth and took the lead on lap 39 from Jimmy Owens as he raced unchallenged until Davenport, with five laps to go started to make a run on him. After taking the white flag Davenport went low in turn one for the lead briefly as O’Neal crossed over to regain the top spot heading down the back stretch. Davenport made one last-ditch effort sliding in front of O’Neal as the two headed to the checkers. O’Neal would cross over Davenport as he beat the 3-time Series Champion to the finish line by just 0.116 seconds.
Brandon Overton, last week’s Sunoco Race Fuels North-South 100 winner at Florence Speedway came home in third followed by Tim McCreadie and Jimmy Owens.
McCreadie, the current LOLMDS point leader jumped to the lead at the start of the event with Owens following in second. The two longtime series regulars ran 1-2 until the tenth circuit when Owens took the lead. Owens was trying to make Topless 100 history by becoming the first driver to win the event in back-to-back years by leading the next 29 laps, before he yielded the top spot to O’Neal.
In Lucas Oil Victory Lane for the 11th time in his career, the third-generation racer won a career-high $40,000. “I was thinking don’t make any mistakes. The top was really thin. I knew when I passed for the lead that some other guys were going to move up there and it was just going to keep dying. We had a lap 75 caution there and my guys were pointing me to the bottom. I heard Jimmy picked the top and I thought I was only going to run this top one lap again because I knew I had some decent speed up there. Whenever I came back around after the restart, they were pointing me back to the top, so I thought I better get back up there.”
“This is just awesome. I knew he [Davenport] was close. They told me was kind of running a little bit of a diamond line in turn one. I knew the line I was running; it was going to be subject to a slider down here.  I knew coming to the white flag, I was actually expecting him to slide me with two to go. I knew I had to be ready the next lap. He was going to slide me, and I was just kind of prepared and turned down the racetrack to get a good run down the backstretch, and then he slid me again. I knew I had to grab that traction early in three to able to get a run to beat him back to the line.”
Davenport, like O’Neal, was looking for his first career win in the annual event but came up just short at the finish line by one car length. “That was just kind of a Hail-Mary there. I got just a little bit of a run on him off of four. He went in just low enough in three that I couldn’t really get a momentum run on him. I was a little bit better running crooked than he was around the top there, but I just couldn’t quite get up there early enough. I probably slid too far and then he got back by me earlier than what I anticipated. He raced me clean. I was just trying to catch a little of grip up there at the checkered flag. He done an awesome job; he never made a mistake.”
Overton entered the event with 21 overall wins this year, looking for his second-straight crown jewel. Finishing in third, Overton said, “We just fell too far back early on. We got it rolling there at the end, we could have run them down there. Hudson and JD, they run a good race. Like I said week after week, we’ve been running a bunch of big races and running up front. I am just proud of my whole team.”
The winner’s Roger Sellers Double Down Motorsports Rocket Chassis is powered by a Cornett Racing Engine and sponsored by Lazydays RV, O’Neal’s Salvage and Recycling, Lucas Oil products, 2150 Enterprises, WR1 Sim Chassis, and Midwest Sheet Metal.
Completing the top ten were Josh Richards, Ricky Thornton Jr., Shane Clanton, Mike Marlar, and Kyle Bronson.
Lucas Oil Late Model Dirt Series
Race Summary
COMP Cams Topless 100 – Presented by Nutrien Ag Solutions
Saturday, August 21, 2021
Batesville Motor Speedway – Locust Grove, AR
LINE-X B-Main #1 Finish (12 Laps, Top 3 Transfer): 1. 21M-Billy Moyer Sr[2]; 2. 1-Earl Pearson Jr[7]; 3. 14M-Morgan Bagley[4]; 4. 11H-Spencer Hughes[6]; 5. 48-Wendell Wallace[1]; 6. R5-Hunter Rasdon[8]; 7. 21XXX-Neil Baggett[10]; 8. 45-Kylan Garner[3]; 9. 27-Rayce McCord[15]; 10. 6R-Robbie Stuart[14]; 11. 92M-Chad Mallett[11]; 12. 503-Jason Miles[12]; 13. 86R-Rick Rickman[5]; 14. 4A-Michael Arnold[9]; 15. (DNS) 78S-Steve Stultz; 16. (DNS) 26R-Cole Farmer
UNOH B-Main #2 Finish (12 Laps, Top 3 Transfer): 1. 40B-Kyle Bronson[1]; 2. 86-Kyle Beard[2]; 3. 75-Terry Phillips[3]; 4. 25-Shane Clanton[4]; 5. 18-Shannon Babb[5]; 6. 1ST-Johnny Scott[6]; 7. 36-Logan Martin[8]; 8. 1R-BJ Robinson[11]; 9. 18P-Brayden Proctor[9]; 10. 13N-Derrick Nichols[13]; 11. 5A-Austin Vincent[10]; 12. 26H-Dustin Holmes[14]; 13. 997-Travis Ashley[15]; 14. (DNS) 91-Chris Jones; 15. (DNS) J8-Jadon Frame