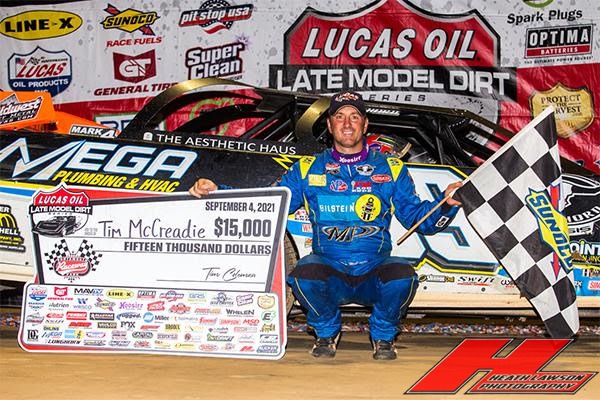 Kyle Bronson led the first four laps of the race until Bronson, Moran, and McCreadie went three-wide for the lead on lap five, with McCreadie emerging as the new first place car. Moran was able to challenge McCreadie after several of the restarts. Despite ten caution flags that slowed the action, McCreadie held the lead to the checkers by 2.8 seconds, for his 27th career series victory.

In Lucas Oil Victory Lane McCreadie was already thinking about the next race in the quest for his first Lucas Oil title. “It’s great to win here that’s for sure, but I am just going one race at a time. The car was pretty much flawless tonight, we are always working to make it better. This group of drivers are so tough. There are still a lot of races left to go in the season. I want to thank my car owners Donald and Gena Bradsher, they have given me everything I need. They are supportive whether we win or not; we could run second, fifth, or whatever and they are always positive. That is a great feeling to know that.”

“With that many cautions you just have to be patient. It’s tough to start and get going and then the caution would come out. Taking the lead there early on was important. I just went for it, and it worked out. I figured maybe Devin or Kyle would go back to the outside and get by me, but no one ever did. It’s great to win in front of this crowd. Sometimes during the other races, I will come up there and sit with some of you. I remember sitting in the grandstands and rooting for my dad for several years.”

Moran, looking for his third career Lucas Oil win and his first of the season, came home in second. “Our car was good for most of the race, we kind of faded there at the end, but we held on for second. I was able to stay with Timmy there for a long time, but those cautions kind of hurt my momentum. That one restart we went to the top and was running him down. I would go into one a little lower than him and we would make up even more ground. To finish second here hopefully gives us some good notes for when we come back here in October.”

Thornton Jr., the top Eibach Springs rookie this season in the series pitted during one of the caution flags to change a flat tire but came back to round out the podium. Yes, it was a nice comeback for us to come back to get third. The car was really good the last part of the race. We could get up there and run with Devin and I thought we had a shot to get second for a moment. To come from the back, I have to thank my crew for getting me back on the track after the flat.”

The winner’s Donald and Gena Bradsher Paylor Motorsports Longhorn Chassis is powered by a Cornett Racing Engine and sponsored by Mega Plumbing of the Carolinas, Bilstein Shocks, D&E Marine, Racing for Heroes, and The Aesthetic Haus.