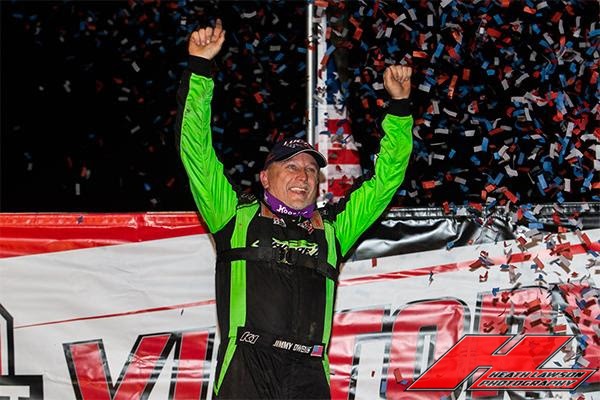 BROWNSTOWN, IN – Jimmy Owens and Devin Moran swapped the lead several times in the final 14 laps in the 42nd Annual Jackson 100 on Saturday Night at the Brownstown Speedway. In the end, it was the veteran Owens edging out Moran by just .079 seconds at the finish.

Owens jumped to the lead at the start of race as he and first-time Jackson 100 starter Spencer Hughes ran first and second for the first 40 laps. Pearson, who had been hounding Hughes for several laps moved into the runner-up spot on lap 41. Pearson then held the second position until lap 58 when Moran moved ahead.

The first 86 laps of the race went caution-free until Ricky Thornton Jr. brought out the only yellow flag after climbing to sixth in the running order with 14 laps to go.

The final 14 circuits between Owens and Moran saw the duo go back-and-forth in the battle for the lead. Moran was able to forge ahead on lap 88, but the two remained side-by-side before Owens regained the top spot-on lap 93. Moran was not done yet, staying right with the defending series champion to the very end but falling just short of victory.

In Lucas Oil Victory Lane for the 77th time in his career the 49-year-old Tennessee superstar was elated with the $20,000 victory. “That was a blast. I didn’t know which way he (Moran) was going to be coming on me whether it was going to be high or low. Because he really, really had a good car. We had a good hot rod too you know. It’s great being in victory lane here at Brownstown.”

“Tonight, was the best track we have had by far here in a while. They did their best with the weather; you can’t do anything about the rain. It was fun racing with Devin, he was respectful and gave me plenty of room and it put on a heck of a show for the fans.”

Moran still awaits his first Jackson 100 triumph after finishing in the runner-up spot for the second time in his career. “Jimmy is the one of the cleanest guys in the country him and a couple of other drivers. I just want to win here so bad. This has now happened twice here at this place. I really don’t think I wanted that caution there at the end because I could see him, and I was running him down. The tires had heat in them and when I got the lead I could here Jimmy just gassing on it. I was just missing the bottom of three and four, so I just blame myself.”

English climbed to third at the finish after starting 11th to round out the podium. “I knew there at the end I just needed a couple of laps to get going. I am so easy on stuff I need to go 150 laps you know instead of a 100. My right rear tire was just coming in when the checkered fell. We just needed a few more laps and I think we could have had something for them. We feel back almost to 18th it seemed like, but we finally came back and started digging.”