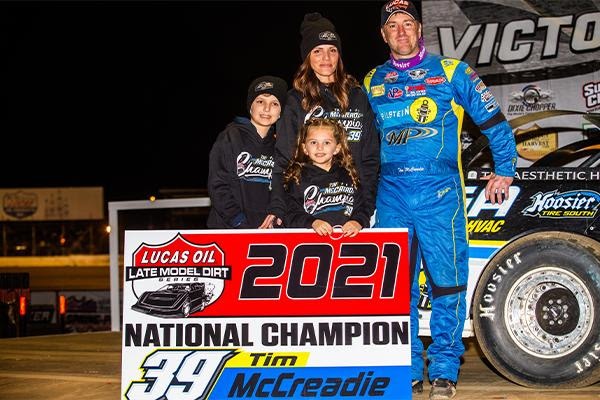 BATAVIA, OH – Consistency was key for the 2021 Lucas Oil Late Model Dirt Series National Champion; five wins, 27 top-five appearances, and 32 top-ten finishes landed Tim McCreadie on top when all was said and done. This consistency allowed Tim McCreadie and Paylor Motorsports to pocket an extra $94,000 in cash plus a multitude of hardware; bringing his year-end winning total to $385,305.

The 47-year-old took the stage as a past Champion in the sport, but a first-time Lucas Oil Late Model Dirt Series National Champion. McCreadie reminisced, “I am not the youngest guy in the world anymore, but I hope I can keep digging away and ascending. I feel like the whole late model sport is going up, who would have thought that 15 years ago when I said ‘man, look at these late model cars’ and I thought it would be pretty neat to try that stuff (driving super late models). I have been very fortunate that I have been able to do a lot of things in my career.”

Like many other dirt late model drivers, McCreadie began his racing career in go-karts; unlike others, his resume is quite extensive on both dirt and asphalt. McCreadie is not only competitive but has his name etched in the history books for Championships and Crown Jewel event wins across a wide array of classes and different series’.

“I truly appreciate everything you guys (Lucas Oil Late Model Dirt Series staff) do; I don’t always show it, I don’t know how to show it sometimes. When you look around this room, you truly understand that this is a special event. I have sat at every table but this one and you don’t realize how awesome and truly rewarding it is until you get lucky enough to sit over there. Thank you and your whole staff for everything you guys do for us and thank you to Forrest (Lucas).”


“Donald and Gena, I love you guys to death. I talked to you guys and you’re a North Carolina team, didn’t know if you wanted to mess with a New York driver. It hasn’t always been perfect, but it has been a positive vibe that you guys have given to all of us. I know I have tried to be better myself personally, because of how you feed onto us. I am truly fortunate to drive for you all and I hope I represent you well. This championship is the cherry on top but hopefully not the end of the dessert.”