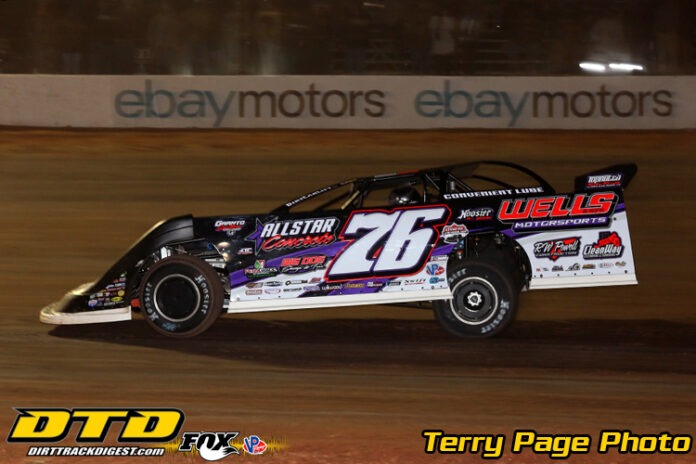 One night after failing to crack the starting line-up in the season opener, Overton chased down race leader and opening night winner, Devin Moran to pass him on lap 27. Overton held off Moran and a hard-charging Hudson O’Neal at the finish. The top three finishers were separated by only .7 tenths of a second at the line.

With several passes in the last few laps of the 50-lap event, Earl Pearson Jr. and Tyler Bruening rounded out the top five drivers.

Pole starter Moran continued his strong start at Golden Isles this weekend taking the lead at the start of the race. Moran held a steady and healthy lead for the first 12 laps of the race until the first of two cautions slowed the action.

On the restart Moran kept his lead as Pearson and Overton battled for second. Overton gained the second spot from Pearson on lap 22, quickly catching Moran in traffic and overhauling him for the race lead on lap 27. Moran tracked down Overton closing the gap with a few laps remaining as O’Neal was peddling hard on the outside.

O’Neal had a run on Moran coming off of turn four as the duo headed to the checkers but Moran was able to hold him off at the finish line. Overton’s 12th career Lucas Oil Late Model Dirt Series win was by just .622 seconds.

Overton failed the series droop-rule after qualifying on Thursday night but came back strong to score the victory 24-hours later. “I told my car owner last night I am sorry I probably cost us that one. I told him I will make it up tomorrow. Our car’s been really good especially last year. That was a heck of race, I just wished we could have gotten to race last night. I know it’s cold and they are trying the best they can. Kyle (Bronson) has done a job with this place. Devin (Moran) is one of my buddies, he’s a heck of a race car driver.”

Sporting the Midwest Sheet Metal orange spoiler indicating him as the current points leader, Moran led the first 26 laps of the race before coming home in second. “I just could not maneuver through lapped traffic. It was hard to maneuver tonight. Brandon (Overton) does what he always does. I am glad he wasn’t in the race last night. Our tires were pretty much bald at the end.”

O’Neal charged back from the back end of the top-10 to take the final podium spot, shaking things up in the last few laps of the race. “We were just a lap or two too late. We had a great car. We just got behind there a little bit early and didn’t fire as good as we needed too. We kind of slowly had to work our way back up, the lapped cars didn’t help any. We proved we a had a good race car and we made improvements from the first night.”