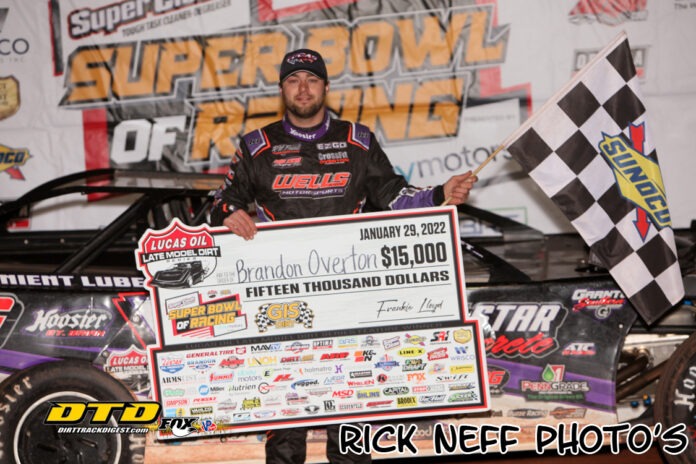 Overall fast qualifier, Kyle Larson, took the lead at the start of the 50-lap main event with Moran and Overton behind him. Moran yielded the second spot to Overton on lap 19. At the halfway mark it was still Larson showing the way with Overton hot on his heels and Moran close behind.

Overton moved by Larson for the lead on the 28th lap. Moran moved past Larson on lap 33 to retake the second slot that he held earlier in the race. Moran picked up the pace even more as Overton was having to deal with heavy traffic in front of him. McCreadie made his presence known in the battle for the lead as he also got by Larson for third.

Moran quickly gained ground on Overton using the top line of the track. Moran had a run on Overton on lap 43. Just as the opening night winner pulled alongside Overton the caution came out. The caution cleared lapped traffic for Overton, but it hurt Moran and McCreadie’s chances for victory.

As the final five laps of the race were winding down Overton pulled away from everybody to pick up the victory over Moran by over 3 seconds. Moran held off Larson, who charged back to third at the finish.

In Lucas Oil Victory Lane Overton talked about his pass on Larson that eventually lead to his win. “I caught him (Larson) there and was just being patient. It’s been a fun weekend. I just hated that I didn’t get to run the first night we were here; it is what it is. When you are in lapped traffic, and you do the wrong move they will get you. The caution came out at the right time. I saw him (Moran) up top. I blasted through the middle on the restart, and it didn’t feel good. So, I got right back down on the bottom. I don’t know how much I beat them by, there were two good race car drivers behind me, just proud to be standing up here with them.”

Moran, who had a win and two-second place finishes during the Super Bowl of Racing thought he had a shot before the last caution of the race came out. “I didn’t need that caution, but that is just how it rolls. He ultimately had the better race car and could maneuver way better than we could. To get two seconds and a win we will take it. The adjustments we made tonight just weren’t quite the right way so we will go back and think about it and do something different next time.”

Leading two of the three races this weekend at Golden Isles, Larson completed the podium with a third-place run. “I don’t think I had enough to hold him (Overton) off, he was really fast. I got into the lead, and I knew my pace was way slow. I felt like if I moved up in traffic, he was going to go right by me so I tried to hold him off the longest I could. They went by me, but after that caution I felt a lot better and to get another spot and get on the podium we will take it.”