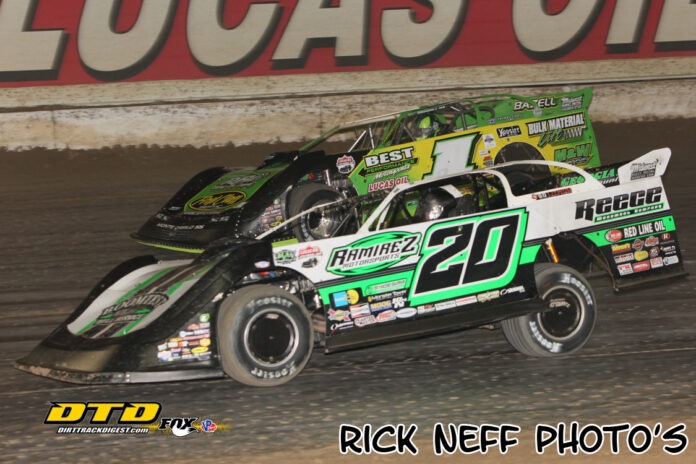 Owens becomes the fifth different winner in the first seven races of the season. Owens grabbed the lead on lap 43 and pulled away for his 78th career Lucas Oil Late Model Dirt Series triumph.

The 50-lap event started off with Tyler Erb grabbing the early lead until Moran took over the lead on lap eight. However, the race could not build momentum as there were five cautions in the first 11 laps of the race; but from then on, the race stayed green until the end.

In the first 15 laps there were three different leaders with Erb, Moran, and McCreadie. McCreadie and Moran would battle through heavy traffic as the last 39 laps of the race went caution-free. It looked as though McCreadie and Moran were going to settle it amongst themselves until Owens made the high-side work in traffic. The veteran racer would first get by Moran for second and then McCreadie for the lead on lap 43 to pull away for a 2.841 second advantage at the finish. McCreadie held off Davenport at the end of the race to finish second to Owens.

Owens, who was the fourth different leader of the race, dedicated his win to his car owner Leon Ramirez. “It was just a tricky track tonight, there were a lot of grooves in different areas. You just had to slide in the right spot. The car was working good, I was able to keep up with the guys especially when we got to lapped traffic. With a track like this you are just a sitting duck out there, all the guys can move around. It was fun racing up front for a change. The work’s been hard. This win is for Leon Ramirez and his family. They are doing good, and we hope to see them soon. It’s always awesome to come down here and get a win. This is one of our better tracks in Florida.”

McCreadie, who finished 11th on Thursday Night at All-Tech, was able to bring his car home in second two nights later. “The other night we were really bad. We ran a different set-up today and found one thing that seemed to help. After hot laps I didn’t know what to tell the crew. I don’t get around here like I want to. They put their heads together and every decision they made is why I ran up front.”

Davenport, who ran third on Thursday Night despite a battery issue towards the end of the race, ended up on the podium for the second straight race. “We were just lucky to be there at the end. We had that scare when Bruening and Erb got together. I think I hit Bruening and that tire at the same time when I slid by there. Our car was pretty good, we fell back early. I just got in the wrong line. I picked up a huge push on one of those restarts and I almost got into the wall. We battled back and ran down Jimmy and Timmy there at one time, but they got through lapped traffic a little better than we did.”