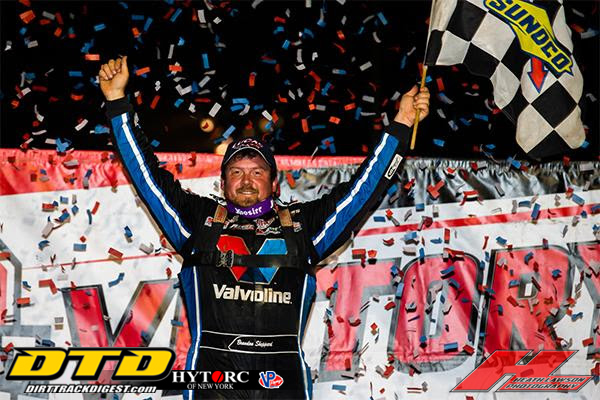 ZANESVILLE, OH – Brandon Sheppard took the lead after two laps and never trailed from there as the current Lucas Oil Late Model Dirt Series points leader went on to win the Elite Munitions Freedom 60 on Sunday night at Muskingum County Speedway. The race was the biggest in the track’s history, paying $30,000 to win and was ran before a packed grandstand at the Moran-family promoted facility.

Hudson O’Neal tried valiantly after the final caution of the race as he tried the extreme topside of the track but could not muster enough momentum to track down Sheppard. Sheppard flashed across the line 2.064 seconds ahead of O’Neal. Tyler Erb finished in third followed by Tim McCreadie and Daulton Wilson.

Ricky Thornton Jr. led the first lap from the pole starting position. Sheppard, who started alongside Thornton on the front row lead on the third scored lap. Thornton then ran in the second spot until lap 29 when he slowed with a flat right front tire bringing out a caution flag.

On the restart Erb inherited the second spot from Thornton as he now had to contend with O’Neal who was up to third. Erb and O’Neal had a hard-fought battle for second behind Sheppard as O’Neal moved into the runnerup slot with 10 laps to go.

Sheppard will carry the orange Midwest Sheet Metal spoiler to Davenport, Iowa on Wednesday night as the current series points leader. “Man, the Moran’s did a heck of job with this race track. There was a great crowd here tonight, thanks to all of the fans for coming out it means a lot to have all of your guys’ support. The racetrack was awesome. I hadn’t been here in a long time. It was really good to have a really good feel underneath me again all weekend long here. We have been all over the board trying to find some speed. Mark (Richards) and the guys have been working their tails off. We kind of got back to what we know. So, I am looking forward to these next couple of months coming up.”

“We had a really maneuverable race car I felt like. The first few laps with Ricky I didn’t know where I needed to be all the way tucked on the bottom or if I needed to sweep out a little bit. So, I was kind of feeling it out. I knew from the last few races that getting the lead early was going to be key. We wanted to be in the lead the first few laps and let it play out there,” said the 29-year-old Illinois racer.

With O’Neal’s runner-up finish he is hoping the momentum from Muskingum County will carry over to Davenport on Wednesday where he went to victory lane last year. “I knew I had a shot of second. Shepp was pretty good. We will take it we had a pretty strong weekend here. We gave it a good effort on that last restart. I sent it to the top in turn one as hard as I could. I was just trying to get a shot at him. We got a little free getting into turn three there at the end. We are putting together some decent runs; we are a lot better than we have been.”

Erb, who won one of the 20-lap preliminary features on Saturday night rounded out the podium in third. “It was a good race. Shepp did a great job there; he never let me get a good run on them restarts. I felt like we gave away second to Hud on that last restart. I tried every line I could out there. We weren’t quite good enough to get by Shepp unless he would have hit traffic or something. It’s good to be back up here on the podium. We won here last night and ran good tonight in the big race. I am super happy. We are going to race it hard over the next month and try to win some good money.”
With the win Sheppard becomes the fifth different winner in five Lucas Oil Late Model Dirt Series races this year that have paid at least $30,000-to-win joining Chris Ferguson (Show-Me 100), Jonathan Davenport (Historic 100), Chris Madden (Mountain Moonshine Classic), and Tim McCreadie (Firecracker 100). 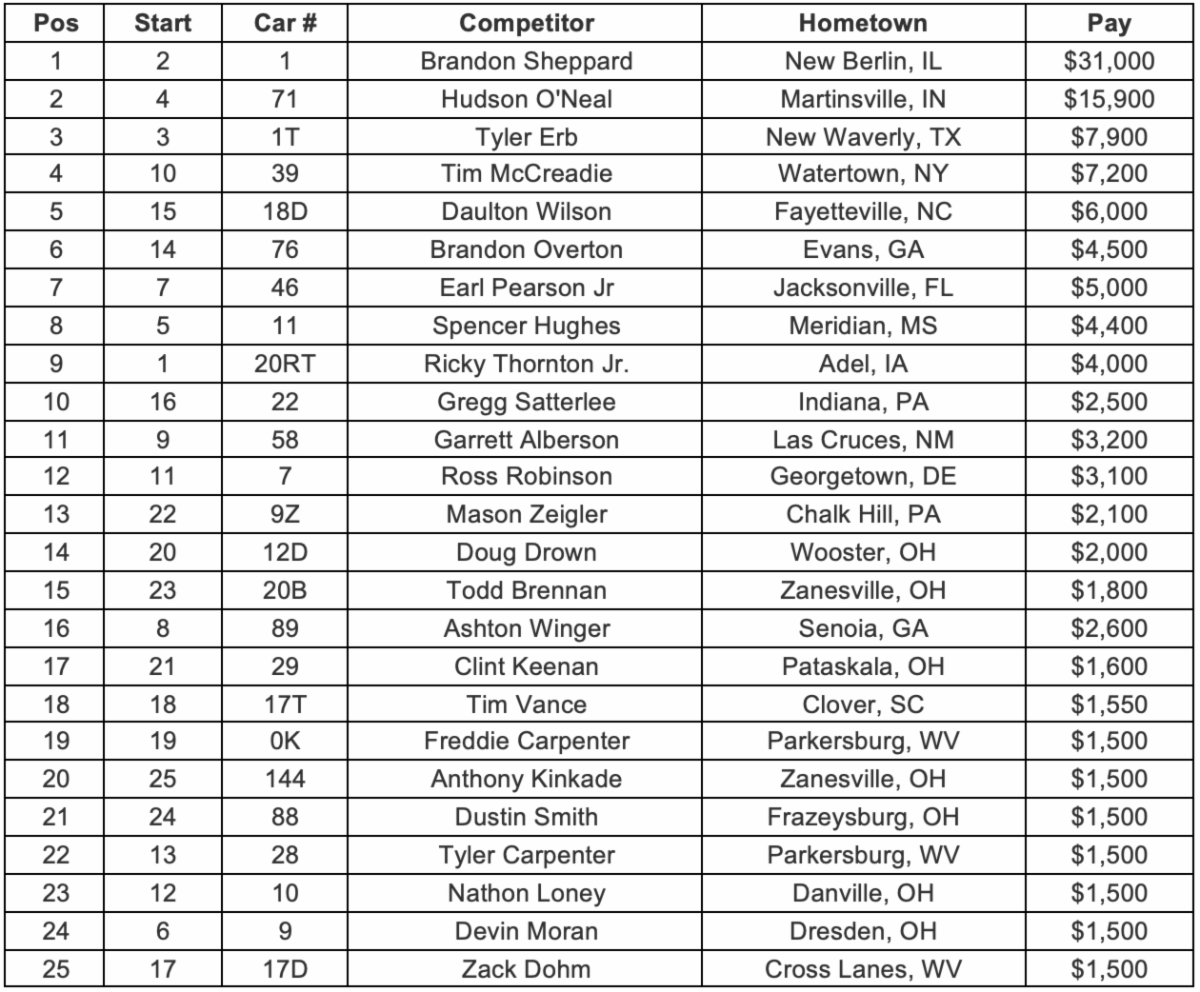