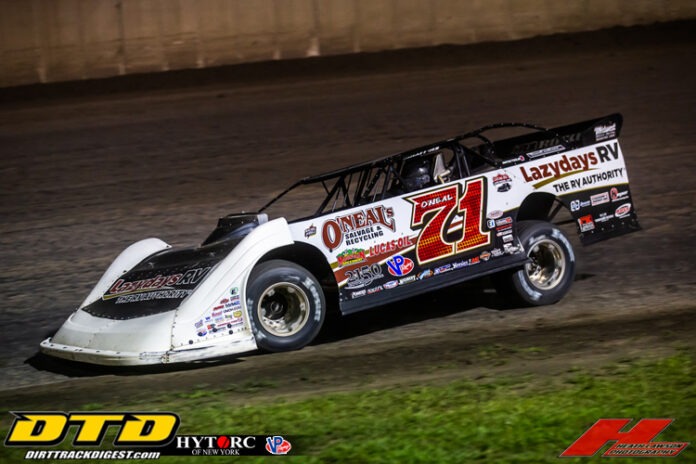 GRANITE CITY, IL – Hudson O’Neal continued his successful run in the month of July in the Lucas Oil Late Model Dirt Series by winning the NAPA Know How 50 on Friday night at Tri-City Speedway.

O’Neal has now won three series events in the last eight days to go along with his victories at Davenport, IA on July 6 and Thursday night at I-70 Speedway in Odessa, MO.

O’Neal went toe-to-toe with Spencer Hughes early in the race until taking the lead for good on the 11th lap after an exciting lead swapping battle with Hughes. O’Neal, who started third led the rest of the way for the victory.

O’Neal took the lead on the opening lap from his inside row two starting spot. O’Neal led the first three circuits until Hughes, who started on the outside of the front row took over the lead, but it was short lived as O’Neal retook the point on lap six and led the rest of the way.

Erb got by Hughes to run in second for several laps until McCreadie got by him on lap 37. McCreadie closed the gap on O’Neal in lapped traffic, but O’Neal held off the reigning series champion for the 16th career series victory for the 21-year-old Indiana native.

O’Neal was joined in victory lane by his team and family as he celebrated his win in the first Lucas Oil Late Model Dirt Series race at Tri-City since 2020. “This is awesome to go back-to-back with the year we have had. It’s pretty cool. I just told myself before it went green, I was going to give this bottom a good shot. I then rolled to the lead on the bottom and then Spencer gave me a good run up there. I was just trying to stay calm and make sure I hit my marks down there. I was hoping that the bottom was going to prevail. Thank you to the Gundaker family and everybody for an awesome facility here at Tri-City. This place races cool every time we come here.”

McCreadie with his second-place finish will maintain the series point lead heading into the series’ next event on Saturday night at Lucas Oil Speedway in Wheatland, MO. “I tried once on the outside to pass him (O’Neal) and lost some spots. I wanted to get to the bottom quicker, but I just got stuck up there and couldn’t. We have a second-place car tonight. Give Tyler (Erb) credit he was giving it his all on the top and that’s all you can ask of us drivers is to do our best. My hats off to Hudson and those guys I know they work hard, and I appreciate my guys as hard as they work as well.”

Owens, who ran second to O’Neal on Thursday night at I-70 rounded out the podium. “I have just got to thank Becky and Dereck Ramirez and the guys. We keep getting the car a little better maybe we will get it into victory lane a little more consistently. I just wanted it to stay green tonight. We were throwing crumbs up there. It was cleaner on the bottom, and it made it hard to run the high side.” 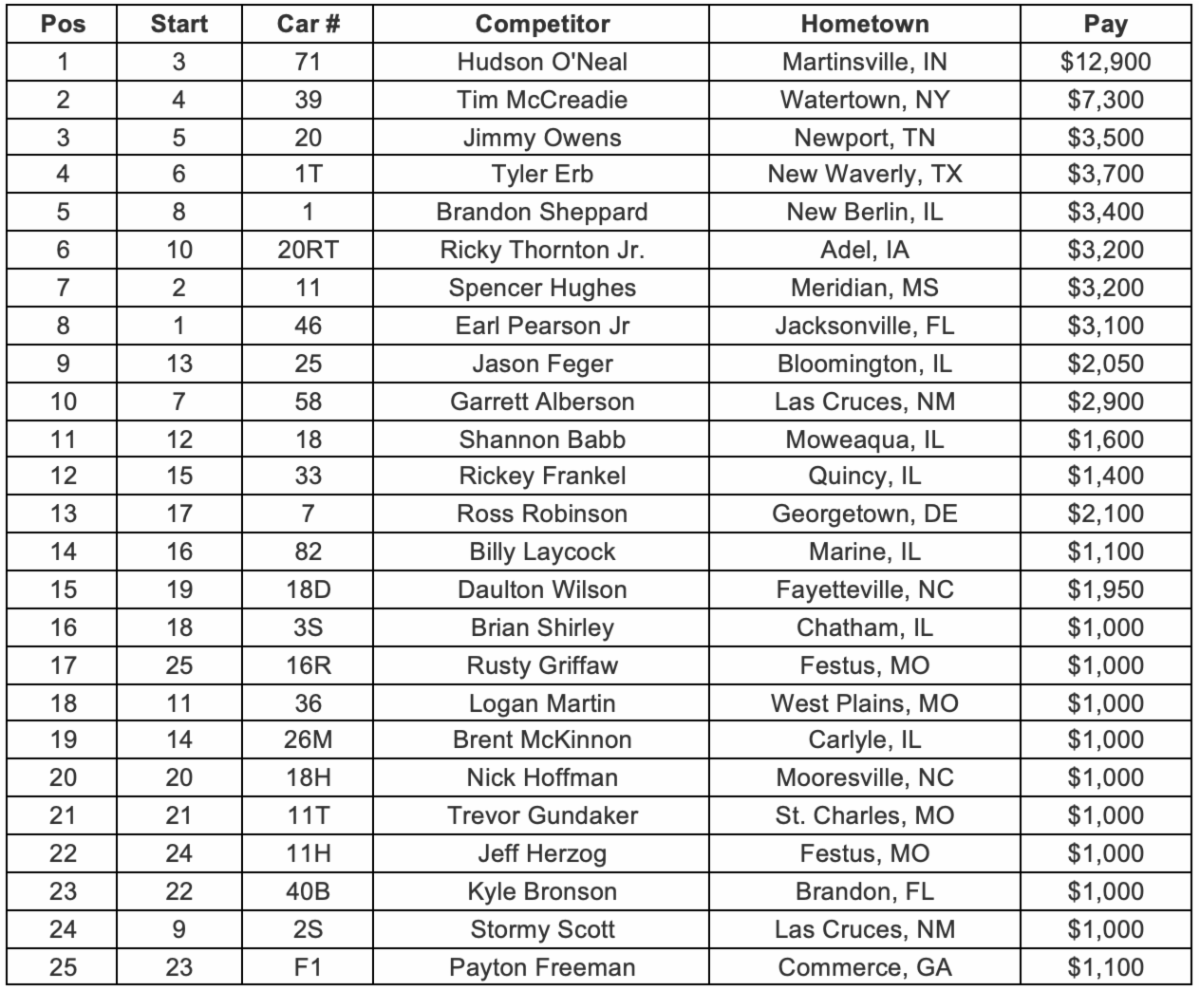