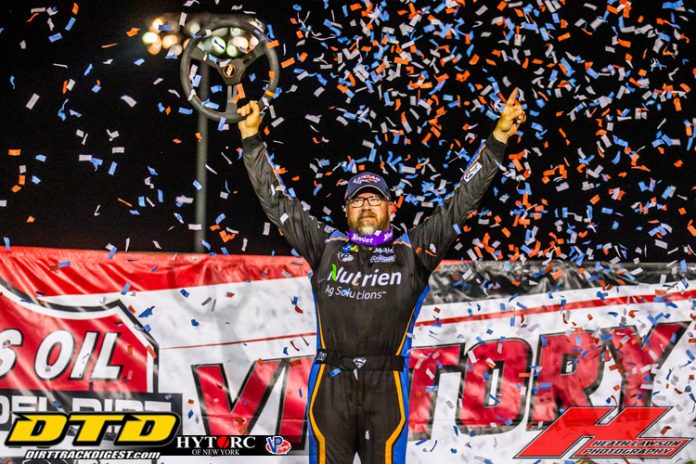 GREENWOOD, NE – Jonathan Davenport became the first three-time winner of the Imperial Tile Silver Dollar Nationals on Sunday night as he captured the 80-lap $53,000 to win event. The 38-year-old Georgia native also won the race in 2016 and 2018.

Davenport, who started seventh in the field charged to the lead on lap 74 around Tim McCreadie, who led the race for the first 73 circuits. Davenport pulled away to a 1.472 second advantage over the current series point leader as the checkers fell.

Devin Moran finished in third after rallying from his 13th starting spot. Mike Marlar finished in fourth keeping his streak alive at 16 consecutive top five finishes since mid-June. Earl Pearson Jr. ran as high as third in the race but finished in fifth.

McCreadie jumped to the lead from his outside front row starting spot as he led Ricky Thornton Jr. for the first 17 laps of the race until Bobby Pierce, the 2019 SDN winner moved into the runner-up slot. Pierce stayed in second until Marlar was able to overtake him on lap 46. The first of three caution flags during the race came on lap 48.

After the restart Pierce fell to sixth as Pearson moved into third. The top three of McCreadie, Marlar and Pearson stayed that way until two caution flags within a three-lap span enabled Davenport to become a factor.

After the last caution of the race with 20 laps remaining Davenport was third and by lap-62 he had moved by Marlar for second after battling with Moran for several laps. Davenport slowly reeled in McCreadie as McCreadie was having to deal with heavy lapped traffic, closing the gap. With six laps to go Davenport was able to take over the race lead which he held to the finish.

In Lucas Oil Victory Lane for the 61st time in his career Davenport picked up his second $50,000-plus victory of the year with the series to go along with his win in the Historic 100 in June at West Virginia Motor Speedway caught McCreadie and said traffic played a major role in him getting the lead.

“Just him (McCreadie) getting into traffic that was it. I didn’t think we was that good really until we got some clean air on the nose, and I could start moving around a little bit. Once we got to third or fourth and I think Devin was on the inside of me and I could never arc the corner to come all the way down to catch the traction. Once I cleared him then I could start running about the same line McCreadie was and we started to track him down a little bit,” said the three-time Lucas Oil Late Model Dirt Serie Champion after scoring his third series win of the season.

“Then there was lapped traffic that’s the only way we got by him. I would rather pass anybody in the pit area but him. He is one of my best buddies on the road and we share a lot of information. It’s good to see him running good and hopefully he can get this championship. Thanks to Joe and Steve (Kosiski) for sure. I hate to see them go. I don’t know what the future holds for this place, but it’s an awesome racetrack. It’s one of the last big places that races really good.”

McCreadie, who was looking for his second career Silver Dollar Nationals win to go with his victory in 2017 fell just short of leading wire-to-wire. “On the long green run I was good. Then on that one yellow where we were riding around and riding around, I think it just greased my stuff up a little. I just didn’t fire as good as I had been on the other restarts. It was just one of those deals,” said the driver of the Paylor Motorsports entry who brought home a $20,000 payday for second.

Moran, who took home $15,000 for third ran door-to-door with the eventual winner for a handful of laps during the race. “I was kind of married to that bottom but as the race went on the grease kind of went away. At the end it felt like the best grip it had. Once I could clear cars and arc down the track it was really good. I got up beside JD a few times and I was right there on him I just couldn’t get by him. This place never ceases to amaze me. I thought for sure they didn’t do enough track prep; I thought it would be one-lane and it wasn’t. It races awesome each and every time we come here.”