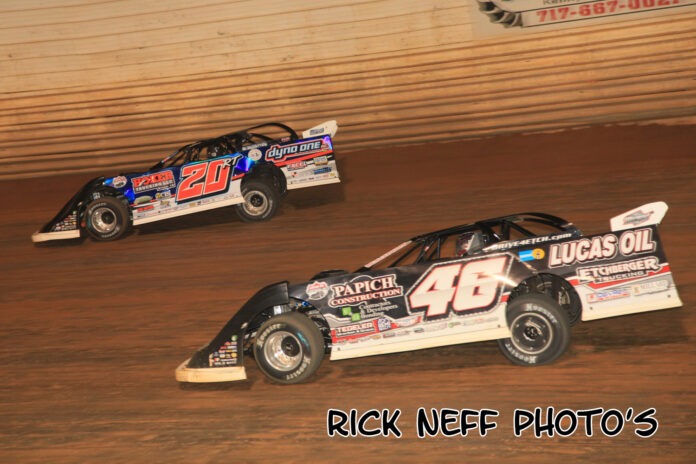 PORT ROYAL, PA – Earl Pearson Jr. raced to the top position on lap 10 and held on for his first Lucas Oil Late Model Dirt Series win since July of 2020. Pearson held off Ricky Thornton Jr. to take the richest dirt late model race in the history of Port Royal Speedway, earning a $50,000 payday in the Rumble by the River main event.

Thornton took the lead at the start of the race as Pearson, who started fourth, started making his move early and had climbed to second by lap five. Pearson then outdueled Thornton in the race for the lead to grab the top position on lap 10.

Pearson looked to be in control until Thornton started to close the gap with less than 10 laps to go. The green flag stretch of racing reached 44 consecutive laps before a caution with six to go would set-up a shootout between the two Lucas Oil regulars.

When the race restarted, Thornton made every effort to get by Pearson, but the 50-year-old Florida native was able to hold off the defending Lucas Oil Late Model Dirt Series Rookie of the Year to take the victory.

Pearson, in Lucas Oil Victory Lane for the 40th time in his career, dedicated his win to his father who passed away last year. “It’s awful emotional for me, I lost my dad last year and this is for him and my mom and everybody up in Heaven looking down on me today. There’s no doubt they have been a huge part of everything I have done. This is for all of my family and friends back home and everybody that’s pulling for us. What a heck of a show that was. Thornton ran me awful clean, he got into me a little bit down there in four, but hey that was a heck of a race and I done all I could.”

“I didn’t know if I needed a caution or not,” Pearson added. “I have run good here several times. I like the big tracks and it paid off tonight. I absolutely had to change my line. I knew I had to go in low and let it drift up because he [Thornton] is a master of the slide jobs so if I didn’t block the line, I knew what he was going to do. He done a heck of a job. We were fast here in the spring and had speed last night. I love this place, it’s a beautiful place to come to. You can race all over it. They done a heck of a job with the racetrack last night after the rain. They do a heck of a job here.”

Thornton, who sits third in the championship points standings, had tracked down Pearson before the only caution of the race. “I really didn’t want that yellow. I felt like I could move around pretty good before that. I tried a Hail-Mary kind of slider, and I knew I wasn’t going to clear him. I wasn’t going to run him over. Earl raced all of us clean, so I made sure I left him a lane. We just didn’t have enough. I felt good in one and two and I could move around. He was kind of committed to the bottom. Overall, I mean it was a brand-new car for this weekend and we had a couple of good runs; we are excited for the rest of the year.”

Satterlee, who captured the Lucas Oil Late Model Dirt Series event at Port Royal in April and came into the race with nine overall wins at eight different tracks, charged from the outside of row number six to round out the podium. “We did nothing different there in the last part of the race. There were less cars in front of us and that allowed us to maneuver a little a bit more and we could race better. We had a good car tonight. We are happy to come up through there to get third. I was disappointed with myself in that heat race. I just needed to get a better starting spot.”