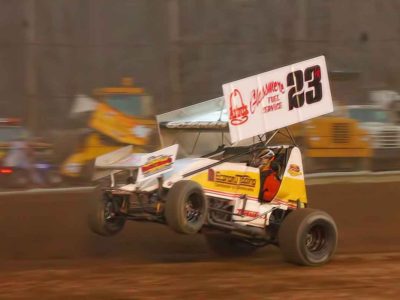 MERCER, PA – Over 230 members of the racing family from Mercer Raceway Park gathered Saturday night at the Normandy Banquet Hall of the Hickory V.F.W. to celebrate the 2015 season and to honor the track’s biggest achievers. Taking the top honors were seven divisional champions. In addition, two special awards were conferred on second generation racers.

Jack Sodeman, Jr., from North Jackson, OH celebrated his third track championship in the 410 Sprint Car division that was presented by 4 Your Car Connection. Sodeman now occupies second place all by himself in that category, trailing only the legendary Ralph Quarterson. Brandon Matus, Michael Bauer, and A.J. Flick were second, third, and fourth, respectively. Finishing fifth in the final tally was The Martha Dionise car driven by Scott Priester, with some assistance from Arnie Kent after Priester sustained season-ending injuries at another area speedway.

Martha Dionise received a stranding ovation from the crowd in tribute to her ownership of a 410 Sprint for 45 seasons. Dionise announced her retirement from the sport just before the final point contest of the year.

In the Precise Racing Products Stock Cars, William Hurrelbrink was a model of consistency in 2016, earning his first title. Ryan Moyer was gracious in passing the top spot to his rival. Curt Bish, Pat Fielding, and Russ Byler made for a competitive season. Shawn Smith, Andy Thompson, Steve Allison, Terry Wheeler, and Dan Fedorchak were other top runners in the class.

Vivian Jones was heralded as the most improved driver, and William Haylett was touted as the rookie of the year. These teens vowed to be back in action at the Park throughout the 2017 season.

Management presented the tentative 2017 schedule, which promises to be chock full of excitement and variety. The season will kick off on March 18, with a practice session, followed by the Snowflake 25 for the Mini Stocks and the Jack Frost Enduro 100. The Chiller Thriller will be up next on March 25, featuring the BRP Modified Tour in the first of two grudge matches with the track’s 358 Modifieds. The return match will be the August 12 Smackdown! Other special events will be the ULMS Late Models on April 15; The All Star Circuit of Champions Sprints on May 6; the B.O.S.S. Sprints without wings on May 27; the Patriot Sprint Tour for 360 Sprints on July 1; the Putzy Kekich Memorial on August 5; and the FAST Summer Shootout for 410s and 305s on August 19. The Little Guy Nationals will have a Preview in July, and the finale in Late September or early October. Please note that these dates are tentative and subject to change.

Marketing partners for the 2017 season at Mercer Raceway Park are still being signed up. Interested parties can contact the track office at 724-662-1310 for details.