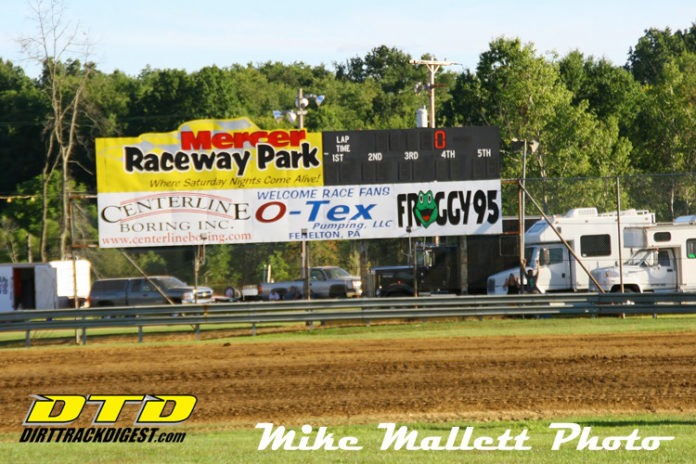 MERCER, PA – Saturday night, April 22, Mercer Raceway Park will hold the first full points event for all five of its racing divisions. “We got a sneak preview of the championship battles last week, when the Turn 4 Toilets 358 Modifieds and the Bonnell’s Rod Shop 305 Sprints got their first points races in as support for the ULMS Late Models,” said track owner Bill Altman. “Jimmy Holden and Darin Gallagher staked themselves out to an early advantage, with their respective victories, and I can’t wait to see who will jump out ahead in the Precise Racing Products 410 Sprints, Rock Concrete Supply Modified Lites, and Ray’s Racing Collectibles and Eperthener’s Auto Wrecking Mini Stocks,” he added.

A.J. Flick got his first career victory in the 410 Sprints, but that was a non-point event held on a Sunday due to inclement weather. The Kittanning Comet, Rod George, was second that night, and he showed no signs of any rust. George returned to the racing wars after a brief sabbatical. Flick and George will have to contend with multi-time champion Jack Sodeman, who is expected to make his first appearance of the season. Michael Bauer, a former 305 Sprint kingpin, was very quick before getting caught up in a late race wreck, so he will be looking for some vindication. George Hobaugh, Jr., and many more stars will be on hand.

Holden is two for two so far in the early going, and the question on everybody’s mind is whether he can extend his winning streak against those 358 Modifieds. Lonny Riggs and Frankie Guidace were very competitive, too. Sid Unverzagt, Jr., Rich Whitney, and Kevin Green will also be in the field. Expected back are a number of drivers who opted to race against the BRP Modified Tour, so watch for Kyle Fink, J.R. McGinley, and Kevin Hoffman to rejoin the ranks. It should be exciting with all of those talented competitors back at Mercer Raceway Park.

Darin Gallagher dominated the 305 Sprint race, but watch for Andy Priest to challenge again. Priest finished second last week despite a broken rocker arm in his mount. Ace mechanic Ted Hull will have that repaired for this week’s show. Will Flemming, a newcomer to Mercer Raceway Park had a strong showing, leading the feature before slipping back to fourth spot.

The Modfifed Lites will be back, too, and fans will wonder whether favorite Alan Dellinger will be on hand. If so, he will have to fend off Doug Jones, Mark Marcucci, Vivian Jones, and many others.


Tyler Fulton, Shane Shook, Tim Callahan, and a flock of Mini Stock pilots will go to the post for their first points contest of 2017. A banner field is expected, as Mercer Raceway Park will be one of the few venues where this class can compete on a weekly basis.

The fun and excitement will start at 6:30, with hot laps and qualifications. Heat races will follow immediately thereafter. Gates will open at 4 p.m., of course.

The regular event ticket pricing will apply for this program. So adults can enjoy all of the fun for just $13. Seniors (60+) will be admitted for $11, and students (ages 9-15) for $5. Children (8 and under) will be free of charge, as always. The Family Pass will be offered for $28, and that will apply to two adults and up to four minors of any age. The Pit Passes will be $30.

If you cannot make it to the track this weekend, the same program will be offered on April 298, with one exception. The Junior Sprints will make their first appearance of the season! Coming soon, on May 6, the Arctic Cat All Star Circuit of Champions will make their lone appearance at the Park.