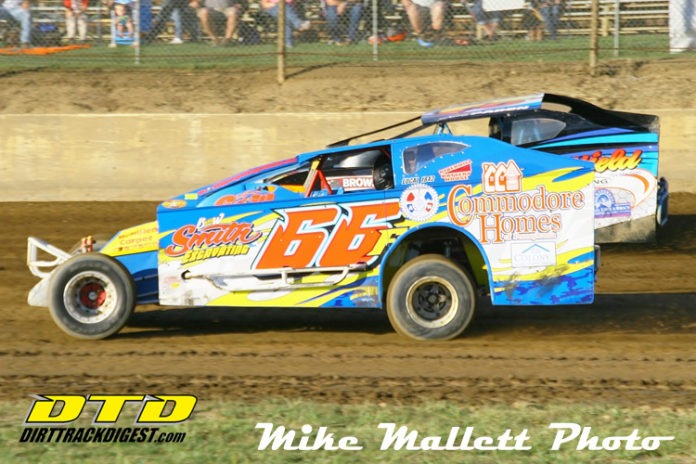 MERCER, PA – Cory Good, of Butler, was best at Mercer Raceway Park in the Precise Racing Products 410 Sprint Cars, topping his teammate, Rod Geaorge by nearly 1.6 seconds. For Good, it was his first 410 career victory ever, and it came at a track that he rarely frequents. Indeed, it was only his second win ever, the first one coming many years ago in a Limited Sprint contest in Ohio.

“We haven’t raced in a couple of weeks and my wife said that I was allowed to go twice this week, so here I am!” exclaimed the happy winner. Good acknowledged that he hasn’t been to Mercer Raceway Park in years, and he “took advantage of a good position on the track.” Good, who was absent from the racing scene for a couple of seasons, got the itch to race again after his father, Larry, passed away. “He had some stuff and we were able to get a car together.”

Good was greeted in victory lane by his teammate, Rod George, who had a big smile as he hugged the younger drive. “That was great stuff,” George said as he congratulated Good on a job well done.

Good and George occupied row one for the 25 lapper, with George Hobaugh and A.J. Flick in row two, and Danny Holtgraver and last week’s winner, Michael Bauer in row three. Good was masterful on the starts and restarts, and he was able to get a quick advantage over the Kittanning Comet. Meanwhile, Hobaugh and Flick were battling for the third position, and Bauer was fending off divisional champion Jack Sodeman, Jr.


Four laps into the fray, Good was pulling away from George, who now had Fflick in his shadow. A caution slowed the pace when Jimmy Seger stopped midway down the back stretch. This time, Good brought the field down for a single file start, and he had no difficulty setting the pace. However, George was starting to close in as the leader was approaching some lapped traffic. Another stoppage occurred on lap seven when Lee Jacobs brought his mount to a stop in nearly the same position as Seger did three laps earlier. Francis Sesco also stopped. Both refired, but Jacobs took his car to the pits while the field was forming up under the yellow.

The racers clicked off nine more laps, with Good out front, ahead of George, Flick, Hobaugh, and Holtgraver. On lap 16 the racing was stopped twice. The most significant was the second incident, which occurred in turn four when MIchael Bauer got crossed up while running in the top ten. While Bauer kept moving, four other cars tangled, with Gale Ruth, Sr. getting upside down. Also involved were Sesco, Codt Bova, and David Just. Ruth was unhurt, but unable to continue.

Good brought the field down for the final restart at a very slow pace. He charged off four with a lead that grew as the final laps were completed without incident. George maintained second to the finish. Flick outpaced Hobaugh and Sodeman.

Late arrival Lee Jacobs was the fastest qualifier for the Precise Racing Products 410 Sprints, setting the mark of 13.722. Jacobs was relegated to fourth for the start of his heat as a penalty for missing his spot in the time trial order. He displaced Jack Sodeman, Jr. at the top of the qualifications list. Heat winners wee Michael Bauer, Danny Holtgraver, and A.J. Flick. There was no B Main.

Landon LaLonde went wire to wire in the Bonnell’s Rod Shop 305 Sprints to earn the victory over Darin Gallagher. Gallagher got close on one occasion, but he could not get his nose under the speedy LaLonde. The race was halted for a lap 15 flip by Adam Anderson, who was unhurt. Following LaLonde and Gallagher were Gregg McCandless, Mike Marano, II, and points leader Andy Priest. The remaining finishers were George Englert, Joe Sylvester, Anderson, and Cody Bova, who was doing double duty. Jeremy Hill was unable to start the race.

Cody Bova set the fastest time in the Bonnell’s Rod Shops 305 Sprints. His time was 14.927. Andy Priest won the lone heat race. There was no B Main.

Strattanville’s Kyle Fink jumped out front at the drop of the green and maintained a comfortable margin over Jimmy Holden in the Turn 4 Toilets 358 Modifieds, Fink’s win was his eleventh in his career and second of the season. Holden has the other three victories this year. Lonnie Riggs ran third, with Jeff Schaffer, Jr. topping veteran Tommy Kristyak, who was making his 2017 debut. Richard Whitney, Jerry

Schaffer, Jason Hufnagel, Sid Unverzagt, Jr., and Ryan Riffe rounded out the top ten.
Fink also paced the Turn 4 Toilets 358 Modifieds in qualifications with a lap of 16.817 seconds. Jimmy Holden and Lonny Riggs prevailed in the preliminaries. There was no B Main.

Hubbard, OH native Bill Fuchs scored his second victory of the season in the Mini Stocks presented by Ray’s Racing Collectibles and Eperthener’s Auto Wrecking. Tim Callahan chased him in vain. Tyler Fulton was a close third. Pat Hanlon and Harold Winner completed the top five. Positions six through ten were occupied by Jamie Tasker, Nick Steiger, Tyler Young, Justin Bailey, and Mike Porterfield. Alan “the Admiral” Perry brought out a red for a flip in turn one. He was not hurt, but his car sustained major damage.

The pair of heats belonged to Fulton by an eyelash over Isaac Paden, and Perry. There was no B Main.

Mark Marcucci timed best at 18.594 seconds. He backed that up with a heat win. Doug Jones was tops in heat two. There was no B Main.

Next weekend Mercer Raceway Park will present a pair of motorsports specials. Saturday evening, May 27, the Buckeye Outlaw Sprint Series will invade. These fellows check their wings at the border, so come in for traditional Sprint racing at its finest. Then, Sunday evening, May 28, Full Pull Productions will present the All American Spring Nationals. It will be the first outing for the powerful Trucks and Tractor, so all of the big names in that sport will be on hand to get a great start in the 2017 title chase. There will be a Monday raindate for that event presented by Ritenour Sales & Service.