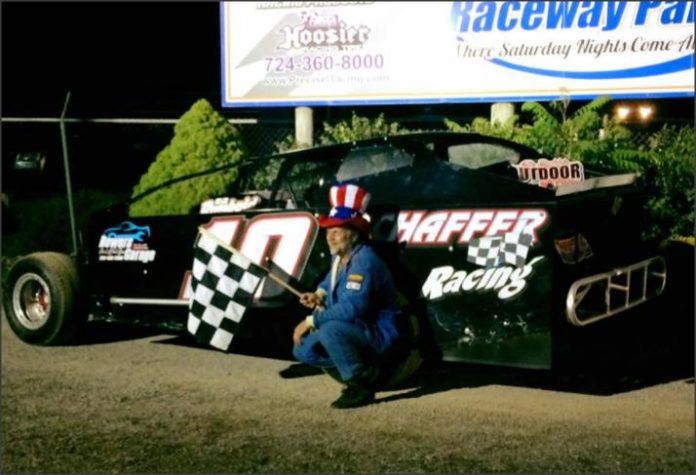 MERCER, PA – Michael Bauer’s third win of the season in the Precise Racing Products 410 Sprint Cars propelled him into a one-point lead over the defending Mercer Raceway Park Champion, Jack Sodeman, Jr. “We race to win, we don’t race for the points, but it is defintely great to have a points battle with Jack (Sodeman, Jr.), I have the utmost respect for Jack, he was one of my heroes when I was in the 305 division, and he still is.”

After celebrating a family reunion this afternoon, Jeff Schaffer, Sr., captured the feature win in the Turn 4 Toilets 358 Modifieds. Gregg McCandless scored his first of the season in the Bonnell’s Rod Shop 305 Sprints. Mark Marcucci registered a dominating victory in the Rock Concrete Supply Modified Lites. Tim Callahan had the nightcap well in hand for the Ray’s Racing Collectibles and Eperthener’s Auto Wrecking Mini Stocks.

Bauer, of Clarion, had the front row, along with All Stars competitor Brandon Matus, of Wampum. Bauer got to turn one first, but it did not take long thereafter for Matus to snare the lead. Matus would go on to lead for the next five laps, before Bauer was able to make a move in lapped traffic to regain the lead.

“Brandon got by me there on the start, but in clean air we were about even,” Bauer explained.
“The track started to slicken off up top, and the bottom started to come in, and we got to lapped traffic and I got a lucky break to get around him.” Bauer added, “when you start up front you don’t want to let it get away from you.”

Bauer had nearly a two second margin over Matus when Matus’ machine suddenly stopped in turn four. Matus was able to pit and make repairs, rejoining the rear of the field for the final four laps.

Bauer led Hobaugh back to turn one on the restart, and they were followed by George, Kruiger, and Sodeman. In the final rounds, Sodeman got past Kuriger. At the checkers, it was Bauer, over Hobaugh, George, Sodeman, and Kuriger.

Gary Kreiss, Jr. and Jimmy Morris were sixth and seventh. Brandon Matus came back through the pack to get eighth. His father, fellow All Stars regular, Brent Matus was next. Eric L. Williams completed the top ten.

Twenty Precise Racing Products Sprints were on hand. The evening’s fastest qualifier was Jack Sodeman, Jr., who toured the speedway in 13.962 seconds. The heat winners were Gary Kreiss, Jr., Rod George, and Jimmy Morris. There was no B Main.

Richard Whitney and Lonnie Riggs paced the field for the start of teh urn 4 Toilets 358 Modified go. Riggs jumped out to the early lead, with Jeff Schaffer, Sr., Whitney, J.R. McGinley, and Sid Unverzagt in tow.

Riggs set a strong pace for the first half of the contest. But, as happens all too often, Riggs slowed coming down the back stretch and he entered the pits on lap ten. That gave the lead over to Schaffer, Sr., who was pressed by McGinley and Unverzagt.

Schaffer and McGinley did have a scary moment on lap 11. While fighting for the lead, they came up on the slower car of Jerry Bowser in turn four. They both made contact with Bowser as the three raced off the corner. Al were able to keep their cars straight and moving forward, which was fortunate as the other racers were bearing down on them.

As the field was coming through turn four on lap 19, Jeff Schaffer, Jr. spun, delaying his father’s trip to victory lane. McGinley was on the senior Schaffer’s flank not once, but twice, for green-checkers racing. The second restart was brought about by a four-car tangle that sent the points leader, Jimmy Holden, to the pits on a hook.

Schaffer was able to hold the lead on each occasion, and he did get to the checkers on the third try. Following him across the line were McGinley and Fink, who ran the last lap side-by-side. Unverzagt was fourth, and Tommy Kristyak fifth.

Sixteen Turn 4 Toilets 358 Modifieds registered for the evening. Top qualifier was J.R. McGinley, at 16.916 seconds. Preliminaries belonged to Jimmy Holden and Kyle Fink. There was no B Main.

Gregg McCandless had the pole for the start of the Bonnell’s Rod Shop 305 Sprint feature, with his former pilot, Andy Priest, on his side. McCandless got the lead and was pulling away from the rest of the racers when the action was stopped for the violent crash of Joe Sylvester in turn tree. Sylvester apparently rode up over the wheel of Joe Lockhart. Fortunately, neither driver was hurt in the melee.

Thirteen Bonnell’s Rod Shop 305 Sprints competed, with Cody Bova the fastes in time trials. The heat victories were scored by Mike Marano, II, and Darin Gallagher. There was no B Main.

Mark Marcucci benefited from a head’s up start for the Rock Concrete Supply Modified Lite main event, which went non-stop. Marcucci had early competition from Curt Eckstrom, but that did not last for long. Instead, Eckstrom had to fend off the challenges of Shane Webb and Chris Logan as the race went on.

At the finish, it was Marcucci over Eckstrom, Webb, Logan, and Shayne Meadows. Joe Zambotti, Doug Jones, Bobby Springer, Jason Johnston, and Cody Dye had the next five positions.

Mark Marcucci also doubled up in the early action for the Rock Concrete Modified Lites, setting the fast time at 18.696 and winning his heat. The other heat winner was Kurt Eckstrom. There was no B Main for the fifteen car field.

Racing was halted during the Mini Stock heats for a fire in the Pit Concession Stand. The flames were knocked down, and nobody was injured.

Next week will be the Little Guys Nationals Preview. The Precise Racing Products 410 Sprints will have the night off, but there will be action aplenty for the Turn 4 Toilets 358 Modifieds, Bonnell’s Rod Shop 305 Sprints, Rock COncrete Supply Modified Lites, Ray’s Racing Collectibles/Eperthener’s Auto Wrecking Mini Stocks, Micro Sprints, and Young Gun Junior Sprints. Then, on July 29, the track will have its full slate of Saturday Night Live! racing, plus bicycle racing for the children. The bike races will be presented by Turn 4 Toilet Rentals and Ray’s Racing Collectibles.