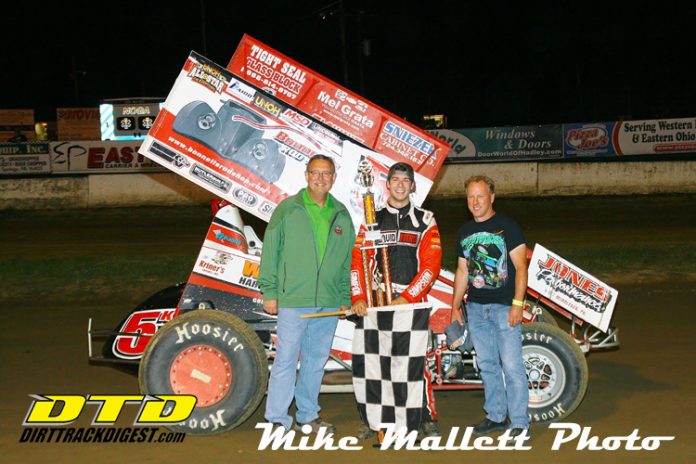 MERCER, PA – The Fourth Annual Paul “Putsy” Kekich Memorial will kick off a memorable month of August at Mercer Raceway Park. The event will be presented by Sunburst Environmental and Bonnell’s Rod Shop to honor one of the track’s most colorful characters. “Putsy” was one of the most beloved competitors at the track. His successes in the Sprint Car and Modified ranks inspired two generations of racers, sons Mike and Doug, and grandson, Adam, all of whom have had their own proud moments at the speedway.

The first rendition of the Kekich Memorial was won by the third generation racer, Brandon Matus, who is one of Adam Kekich’s dearest friends. Round two belonged to Danny Holtgraver, who enjoyed a night off from the All Stars Circuit of Champions. Jack Sodeman, Jr. won the most recent edition.

Sodeman will certainly be back for the 2017 contest, as he is gunning for yet another track title in the Precise Racing Products 410 Sprint Cars. He inched closer to points leader Michael Bauer last week, although both had their own difficulties. Bauer began the night with a blown motor in his car, but he made arrangements to borrow the 305 Sprint of Nevan O’Donnell to keep himself afloat in the points race. Nonetheless, it appeared that Sodeman would surely overtake him in the standings. But fate intervened during the feature race when Sodeman exploded a right rear tire. The resulting damage to the rear suspension of his car could not be repaired, and the race went on without him. Meanwhile, Bauer soldiered on to a tenth place finish with the underpowered car, while Sodeman was scored in eleventh, based on his laps completed. They will enter the August 5 Kekich Memorial separated by just six points!

Of course, there will be plenty of other talent on hand for the Kekich Memorial. Dan Kuriger held off Rod George for the win last week. Ironically, they finished one-two when Kuriger got his last victory at the tricky oval several years ago. Kuriger does not want to wait so long to get the next one! George Hobaugh, Davey Jones, Jimmy Morris, Mike Miller, Eric L. Williams, and Vinnie Daugherty are a a few who could put Kuriger back on the waiting list, however.

Can anybody stop Jimmy Holden? The multi-time champion is closing in on yet another title in the Turn 4 Toilets 358 Modifieds. Lonny Riggs has been his main threat each week. Kyle Fink is second on the winners’ list, but he missed a couple of races, so he trails in the points chase. Likewise, J.R. McGinley has been in the mix whenever he drops in. Sid Unverzagt, Jeff Schaffer Sr. and Jr., and Kevin Green are among a talented group of racers who will make things interesting.


Darin Gallagher now has a 117 point advantage in the quest for his first Bonnell’s Rod Shop 305 Sprint Car crown. His cushion swelled when the second place runner, Gregg McCandless took a week off after getting his first taste of victory in the 2017 season. He is expected back, of course, along with last week’s winner, Mike Marano, II, and Andy Priest.

Shane Webb now sits atop the rankings in the Rock Concrete Supply Modified Lites. But, it is Mark Marcucci who is on a roll of late. He scored yet another victory as he tries to climb back into the race for the title. You see, Marcucci missed some races, and that put him into a hole that he is desperately trying to dig out from. With four races left in the season and momentum on his side, don’t be surprised if he overcomes the 66 point deficit.

Another close contest is in the Mini Stocks presented by Ray’s Racing Collectibles and Eperthener’s Auto Wrecking. Bill Fuchs is at the head of the class again, by eight markers. Tim Callahan is expected back behind the wheel of his car. Caleb Hickok filled in capably in his absence, and kept Callahan in the championship hunt. Tyler Fulton, the defending champ, hangs in in the third spot, and last week’s winner, young Isaac Paden, is in fourth. Twenty or more Minis have been giving the fans great racing week in and week out, and this Saturday should be no different.

The gates will swing open at 4 p.m. Hot laps and qualifications are slated for about 5:30, with heat racing to follow.

This will be a special event, so the ticket pricing will be a bit different this week. Adult admission will be $17. Seniors (60+) will be welcomed in for $15, and students (9-15) for $7. The little ones (ages 8 and under) will be admitted for free, as always. Folks wanting a Family Pass can bring two adults and up to four minors of any age for just $35. The Pit Passes will also be $35.

The BRP Modified Tour will come in for the second appearance of the season next week, August 12. It will be a Smackdown!, which pits the powerful Big Block Mods against the track’s nimble Turn 4 Toilets 358 Modifieds. Looking back over the annals, Dave Murdick has been the most prolific winner of this annual summer event. He will be joined by Erick Rudolph, the fleet New Yorker who has dominated the racing with the series this season. But, Rex King, Sr. and his son, Cooter, will be on hand to challenge, for sure. Jimmy Holden, Lonny Riggs, and others will carry the colors for the Mercer faithful. Will this be the year for the Small Blocks to shine?

The Summer Shootout, featuring the FAST 410 and 305 Sprints from the Attica-Fremont circuit, will be next up, on August 19. And, the Patriot Sprint Tour will close out the regular season as point championships will be settled in the regular divisions on August 26.