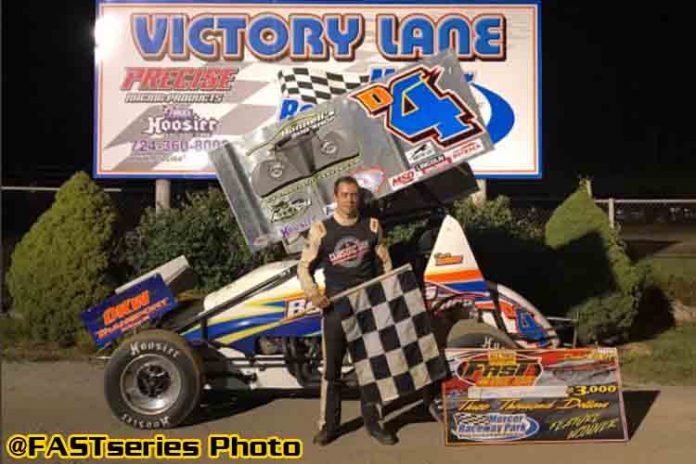 MERCER, PA – Danny Holtgraver returned to familiar territory, the victory lane at Mercer Raceway Park, when he captured the Summer Shootout presented by J.S. Bova Excavating. It was his second Mercer victory of the season despite racing just a part-time schedule. The race was a battle for bragging rights between the Precise Racing Products 410 Sprints and the potent FAST Sprints from the Fremont Attica Sprint Tour. While Holtgraver has considerable experience racing in Western Ohio with the All Stars, he cut his teeth on the tricky Mercer oval.

Also getting wins on this special night were Cody Bova in the FAST and Bonnell’s Rod Shop 305 Sprint challenge, Kyle Fink in the Turn 4 Toilets 358 Modifieds, Shane Shook in the Ray’s Racing Collectibles and Eperthener’s Auto Wrecking Mini Stocks, and Mark Marcucci in the Rock Concrete Supply Modified Lites.

Regarding his limited appearances this season, Holtgraver has a remarkable winning percentage. “This is working out pretty good,” he said. “Sometimes it is better to be lucky than good, and that was the situation right there, you know, a couple of guys dropped out.” But Holtgraver was being humble, for he was also good, quite good, when it counted. “Once I got the wing back a little bit and found the cushion, it was on the edge, and once I found it, I just ran the he!! out of it.”

Adam Kekich and George Hobaugh, Jr. had the front row for the start of the thirty lapper. Holtgraver and the defending Mercer track champion, Jack Sodeman, Jr. had the second row, with Broc Martin and Chris Andrew in the third. At the drop of the green, Kekich led Hobaugh into the first corner, and Holtgraver maneuvered past Sodeman for third. Sodeman slipped past Holtgraver by the time the first lap was completed, however.

Kekich led through the first caution, which occurred on lap four when Jimmy Morris stopped on the back chute. Kekich was able to lead only one more lap, though. His car slowed in turn one with five complete, and he drove into the infield coming off the second corner. That gave the lead over to Hobaugh, who was gunning for his first ever 410 victory at Mercer Raceway Park.


Hobaugh control of the race, but Sodeman was beginning to reel him in as they approached lapped traffic. With thirteen laps completed, the race took a dramatic turn. Hobaugh bobbled between turns one and two, losing some of his momentum. Sodeman saw an opportunity and he dove inside Hobaugh as they both tried to sort through the slower cars. They were side by side coming off turn two, and touched wheels. Both cars spun, but Hobaugh was able to keep moving. Miraculously, he also kept the lead. Sodeman was not so fortunate, as he spun to a halt midway down the back stretch.

Hobaugh kept the point for the restart, but now he had Holtgraver on his tail. Andrews tried to sneak past Holtgraver coming off turn four when the race resumed, but Holtgraver had the better line through one and two to keep the second position. Meanwhile, Martin and Dan Kuriger were fighting for fourth.

Vincent Doughtery slowed the pace four laps later when he stopped in turn two. Hobaugh still had the when things went green again, but Holtgraver was busy searching for a faster line. He found something on the outside of turns three and four and he began to mount a serious challenge for the lead. With 22 complete, he and Hobaugh were wheel to wheel coming off turn four, but Hobaugh was not ready to give up the lead. The next time around, he had no choice, as Holtgraver made a powerful move coming through three and four to take the lead.

Holgraver’s journey to the checkers was interrupted once more for another stopped car in the second corner. This time, it was D.J. Foos, who had charged from deep in the field to make a bid for a top five finish.

Holtgraver showed Hobaugh his heels over the final six laps. During that time, the battle on the track was for the fourth spot, involving Andrews and Kuriger. Kuriger did get a nose under Andrews once, between three and four, but Andrews rallied to keep the position.

At the checkers, it was Holtgraver by over 2.7 seconds. Hobaugh maintained second, his best finish at the Park. Martin, Andrews, and Kuriger were next across the finish line. Brian Lay was sixth, ahead of Michael Bauer, Duane Zablocki, Tyler Gunn, and Shawn Valenti.

The evening’s fastest qualifier in the FAST and Precise Racing Products 410 Sprints was Danny Holtgraver. He turned in a time of 14.089 seconds. The heat wins were scored by Michael Bauer, Dan Kuriger, and Jimmy Morris. There was no B Main.

Cody Bova fought off a persistent Paul Weaver to earn his tenth victory in 305 Sprint
Car racing at the Park. For the former Modified Lite champion, it was his fist victory on the tough FAST 305 circuit.

Bova was especially pleased with the outcome, as his family’s business was the sponsor for the night. “This one is huge, I don’t know if it’s soaked in yet,” he said. “To come out here and win at my home track, and win my first FAST race, man, this is awesome.” It wasn’t easy, though. “There were a lot of close calls there, especially once Paul (Weaver) passed me, I wasn’t giving it up that easy, so to pass him in lapped traffic and have some close calls like that, it’s pretty special.”

Bova led from the start, but Weaver and Nate Dussel were battling for second in the early going. Once Weaver took control of the position, he began to chase down the leader. Weaver tried the high side, and then the low side, but he was unable to get past Bova. Finally, he swept around Bova coming through turn four. Bova immediately began to plan his counterattack.

Bova stayed close as the leaders approached lapped traffic. He dipped low in the first corner and regained the lead on lap 14. Bova would continue to lead the rest of the 25 lap distance, but he knew that Weaver was constantly close.

The FAST and Bonnell’s Rod Shop 305 Sprints did not take time this evening. Their heat winners were Seth Schneider, Nate Dussel, and Bobby Clark. There was no B Main.

Kyle Fink was aboard Jimmy Holden’s car for this night of racing. He brought the car to victory lane for the eighth time of the season in the Turn 4 Toilets 358 Modified division. For Fink it was win number four, with the three previous triumphs being in his own
machine. “I knew I had to win in that car. If I didn’t win in that car, people were going to talk.”

When asked to compare the Holden car to his own, Fink said “I like this. That motor is better than what I got.” He added, “I can’t thank Dean Holden enough for letting me run his car tonight. I’ve chased those guys for a looong time and for them to say ‘hey, drive our car, that’s great, really good.'”

Lonny Riggs chased Fink the entire way, but could not get close enough to make a move for the win. Kyle Holden scored his best finish at the track, a third, followed by J.R. McGinley and Tommy Kristyak. Sid Unverzagt, Jr., Jason Sines, Richard Whitney, Kevin Green, and Jerry Bowser were the remaining finishers.

Isaac Paden bolted out front at the start of the Mini Stock feature presented by Ray’s
Racing Collectibles and Eperthener’s Auto Wrecking. Paden held off Tyler Fulton in the early going, and later Bill Fuchs and Shane Shook. But, lady luck was not on Paden’s side, as a mechanical problem knocked him from the lead. Shook was in position to pick up the slack and led the final five laps. Fuchs was second, with Fulton third. Tim Callahan and Mike Porterfield were fourth and fifth. Ed Haylett, Summer Pitts, Pat Hanlon, Karlee Longwell, and WIlliam Haylett completed the top ten.

Anthony Shetter was unhurt when he flipped his car in a turn four crash during the feature.

The Ray’s Racing Collectibles and Eperthener’s Auto Wrecking Mini Stocks had a pair of heats, won by Tyler Fulton and Isaac Paden. There was no B Main.

Mark Marcucci captured his eighth feature win in the Rock Concrete Supply Modified Lites. Marcucci had a $200 bounty on his head, but nobody could collect the extra cash. Marcucci methodically worked his way to the front and took the lead on lap nine. Alan Dellinger and Doug Stanley, both of whom have graced victory lane at the track this season, were no match for Marcucci this night. They were second and third. Fourth went to Cole Petrelle. Joey Zambotti was fifth. Jacob Bova, Brandon Shaw, Vivian Jones, Chris Logan, and Bob Boano were the next five across the line.

Mark Marcucci qualified the best in the Rock Concrete Supply Modified Lites, at 18.852 seconds. Preliminaries belonged to Kenny Meadows, Rod Jones, and Joey Zambotti. There was no B Main.

Next week, August 26, will be the regular season finale. There will be racing for all five Saturday Night Live! divisions, and it will be the final night of points. Season championships will be determined. Before the feature events, all fans will get the opportunity to mix and mingle with their favorite drivers, as it will be a Herr’s Meet Your Heroes Night as well. But, there is more! The Patriot Sprint Tour will be in, courtesy of Bonnell’s Rod Shop, to make up for the rainout earlier in the season. Watch the website for details of some other fun activities to be added to the card.

Remember that the only action set for the speedway during the month of September will be the Final Fall Nationals for the USA East Region. The sound and the fury of the trucks and tractors will be presented by Watson’s Inc.

Mercer Raceway Park will host the final racing on the oval on October 6 and 7, when the 17th Annual Little Guys Nationals will be presented by American Racer Tires.