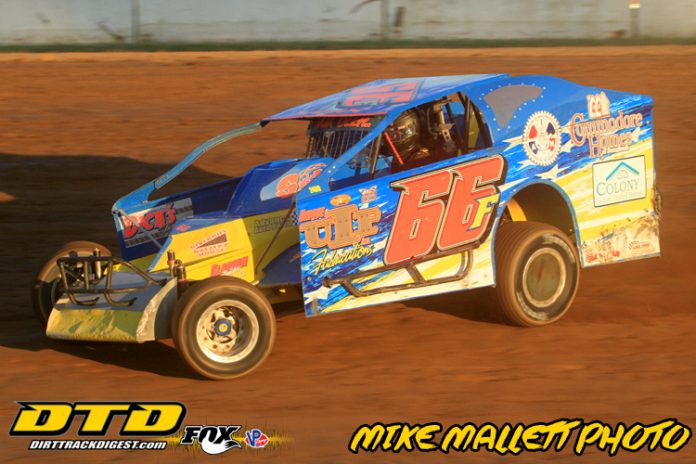 Sodeman felt pretty good in victory lane, despite his broken back. “This takes some of the sting away from the broken back. I couldn’t climb up on the car quite as fast, but we still got there,’ he said with a laugh. “Hopefully, we can stay healthier and not get beat up so much.”

He was pleased to gather the victory at a track that is special to the Sodeman family. “Here at Mercer, it’s kinda our home track. If you look back in the history for the Sodemans, this track is where my father ran his very first laps racing, and it was one of the first places where I had some of the fist laps I ever turned. So, it is just nice to come to a place that has a lot of history, not only as a track, but for my family to be able to do well here.”

Sodeman started on the pole, with Michael Bauer on his flank. They were the two contestants for the track championship. Unlike previous years, which put the points leaders out front on championship night, they wound up there by the luck of the draw. A young fan pulled an invert 6 and both Sodeman and Bauer finished third in their respective heats.


Sodeman jumped out to the lead immediately, with Bauer second. However, it was Dan Kuriger who moved into second from his third row starting spot. Kuriger began closing on Sodeman while they raced through traffic. It looked as though Kuriger caught a break when Jimmy Morris spun off the top of turn three. That would have put Kuriger on Sodeman’s tail for the lap 19 restart. But Kuriger never got the chance to go head to head with the leader, as he pulled off the track while the caution still flew over the speedway.

That put Bauer back into the catbrid’s seat. Bauer could not take advantage of his good fortune, though. He maintained second over the final six laps but did not contend for the win.

Andy McKisson turned in a remarkable performance getting third in Ken Rossey’s machine. It was the first outing for McKisson in 2017. George Hobaugh, Jr. was fourth,and Gary Kriess, Jr. was fifth. Davey Jones was sixth and Vincent Dougherty was seventh. Jimmy Morris rallied to get eighth. Mike Miller and Darren Pifer completed the top ten.

The heat races for the Precise Racing Products 410 Sprint Cars went to Vincent Dougherty, Dan Kuriger, and Jimmy Morris. The evening’s fastest qualifier was George Hobaugh, Jr., with a time of 14.210 seconds.

Scott Kreutter covered the twenty-five lap distance in just 6 minutes and 33.595 seconds to capture the Patriot Sprint Tour feature event. Kreutter started on the front row and was never headed. His margin of victory was just over 1.7 seconds.
Kreutter had a close call once in traffic, though. “It got pretty crazy there at the end. Three! I didn’t realize there were a bunch of cars there. I didn’t know what was going to happen.”

Dr. Steve Collins ran second the entire way, but he was challenged over the second half of the contest by Dylan Westbrook. Collins said “I kinda had a feeling when we were getting into lapped traffic, it’s not unusual for somebody to get up behind you there.”

The Patriot Sprint Tour had three heats on the docket. They were won by Kyle Drum, Steve Collins, and Dylan Westbrook. The Four Laps of Fame Dash race went to Chuck Hebing.

Kyle Fink took advantage of a restart with just two laps to go. Lonny Riggs had his huge lead wiped out when the caution flag came out for Sid Unverzagt, Jr. “We got lucky on that one,” Fink said. “Lonny was gone. I didn’t think that there was any chance that we were ever going to win this race. Then, we got that late race yellow.”

When the green light flashed on again, Fink got the jump on Riggs, who fought back valiantly on the inside. However, Fink had the momentum and was able to roll off the top of turn two with the lead. Fink explained, “I kinda got the jump on him, I guess, and I got around him somehow. Then he put a slide job on me in turn two and I never even backed out of it. I said, ‘I’m either going to win this or lose it.'”

Riggs took another run at Fink coming through turns three and four on the final lap, but came up short by less than a car length. The margin of victory was just .049 seconds.
Jimmy Holden cliched yet another track championship with his solid third place finish. Tommy Kristyak and J.R. McGinley were fourth and fifth. Jason Sines, Richard Whitney, Kevin Green, and Sid Unverzagt, Jr. were the remaining runners.

In the Turn 4 Toilets 358 Modifieds, Kyle Fink and Lonny Riggs captured the flags in the preliminaries. Jimmy Holden stopped the clock at 16.966 seconds to earn the fast time honors.

Cody Bova roared to his fourth victory of the season in the Bonnell’s Rod Shop 305 Sprint Cars. Getting second was Darin Gallagher, who clinched his first championship in the division before the feature hit the track. Joe Sylvester turned in a strong third place finish after leading at the start of the contest. Andy Priest got his car repaired after a devastating heat race crash, and he finished fourth Mike Miller was fifth.
Positions six through ten went to Caitlin Chaffman, Anthony Mohrbacher, Nevan O’Dennell, Jared McFarland, and Logan McCandless.

Tyler Riggs scored the win in the Rock Concrete Supply Modified Lites. Riggs jumped out to the early lead, but all eyes were on points leader Mark Marcucci. Marcucci was starting ninth and he had a $250 bounty on his head. However, Marcucci’s hopes of keeping his winning streak alive ended on the very first lap, when he was caught up in a skirmish in turn two. While Marcucci was able to stay in the race, he was sent to the tail for the restart.

Riggs again took the lead, and the battle was for the second position. Joey Zambotti held the spot until lap 12, when Allan Dellinger took it away. Meanwhile, Marcucci was working his way back through the field.

A late race caution bunched the field up again, and fans were wondering if Marcucci had a little magic going for him. He lined up seventh for the restart. He immediately passed a pair of cars and got to the fourth spot with three laps remaining On the final lap, he dove to the inside of Zambotti in turns three and four, and picked up third, as Zambotti spun from contention.

Mark Marcucci won his heat in the Rock Concrete Supply Modifed Lites and also set the fastest time in qualifications, at 18.515 seconds.

Isaac Paden raced to victory in the Mini Stock feature presented by Ray’s Racing Collectibles and Eperthener’s Auto Wrecking. Paden wrested with early leader Tim Callahan before Tyle Fulton snuck by them both. Then, Paden came back to challenge Fulton for several laps. Paden assumed command of the race and then the battle was on for the second and third positions between Fulton, Callahan, Bill Fuchs, and Ed Haylett

Paden took the win over Fulton, Callahan, Fuchs, and Haylett. Next across were Alan ‘the Admiral” Perry, Justin Bailey, Patrick Drennan, J.R. Shaner, and Karlee Longwell. Fuchs’ top five finish was enough to clinch his frist track championship. In his post-race interview, Paden announced that he would be leaving the sport to enter the United States Marine Corps.

Remember that there will be no racing on the oval until the 18th Annual Little Guys Nationals, October 6 and 7. That event will be presented by American Racer Tires.
Watch the website, www.mercerracewaypark.com, and your favorite media outlets for details. We expect that registration forms will be available at the website next week. Get them in early to take advantage of the pre-race registration discount.

In the meantime, there will be the Final Fall Nationals for U.S.A. East Regionals Truck and Tractor Pulls, presented by Watson’s, Inc. The pull will be held on Saturday, September 16. All the big names in the pulling trade will be here. For a unique motorsprots experience, so should you! 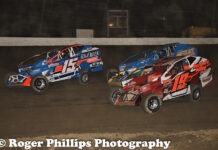 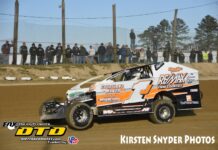